'FluMist' may again be a good option for vaccine 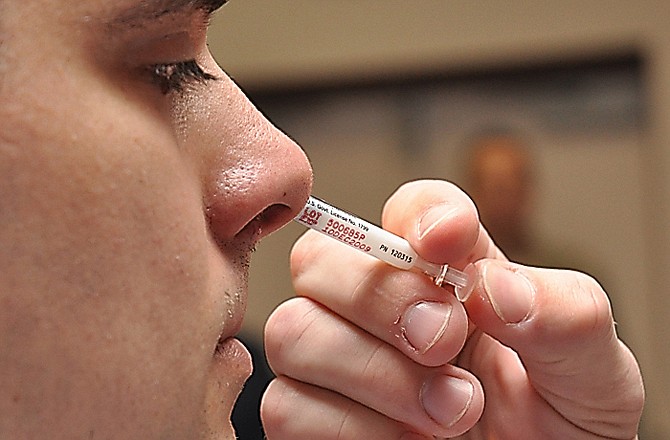 A nasal mist is one of three ways to get vaccinated against influenza.

While not as early as it did last year, flu season is heating up.

Centers for Disease Control and Prevention (CDC) data show the annual spread of certain strains of flu is beginning to increase.

During the last week of 2018 in Missouri, 653 cases of influenza were confirmed through laboratory testing. Most of those cases (609) were influenza A, while 40 were influenza B and four were untyped.

There had been 338 confirmed cases statewide the previous week, and 459 the week before that.

During the last week of 2017, laboratory workers confirmed 4,862 cases - more than have been confirmed for the entirety of this flu season in Missouri.

So far this year, only 4,122 cases of flu in Missouri have been laboratory confirmed. At the same time last year, 17,182 cases had been confirmed in the state.

In Cole County, there have only been 47 laboratory-confirmed cases of flu so far this season, said Jaime Young, Cole County communicable disease and epidemiology director.

Missouri has changed its status from "local" to "regional," meaning influenza is beginning to become more widespread, she said. The flu is beginning to show up more commonly throughout the state.

"It has certainly changed over the last couple of weeks," Young said. "We're starting to see a little bit more."

The flu season is considered to run from Oct. 1 to about May 20. So far this season, the state had 4,122 cases of influenza confirmed in laboratory testing. At the same time last year, there had been 17,182 confirmed cases of flu.

On Monday, as the flu season progressed, the American Academy of Pediatrics released findings from five studies conducted from 2013-16, which show the nasal spray was less effective against influenza A than the injected form for all pediatric age groups. The studies looked at the effects of the vaccine on children ages 2-17. More than 17,000 children were involved in the study, in which some received the nasal vaccine, some received injections and some received no vaccine.

The study found the nasal vaccine was effective early on, but it appeared to lose potency over a couple of flu seasons.

The nasal vaccine was licensed in 2003, said Pedro Piedra, a doctor who studied the phenomenon.

During the 2009 influenza A pandemic, studies suggested the nasal dosage was for some populations far more effective than shots, Piedra said. At the time, the Advisory Committee on Immunization Practices for the CDC recommended the nasal for eligible children ages 2-8. (Last year's flu season was the worst since the 2009 pandemic.)

The nasal vaccine was effective through 2009; however, by the time the 2014-15 season came along, the committee began to recommend against its use.

Manufacturers have worked with the compound and updated the flu strain from which it is based.

This year, the committee is again recommending the "FluMist" for the current flu season, in part because manufacturers' data show it is again effective for children ages 2-4. Public Health England conducted an interim analysis of the vaccine's effectiveness, Piedra said. The organization's findings showed the nasal formula was 90.3 percent effective in preventing influenza in children ages 2-17.

"This early result is encouraging and supports the reintroduction of (FluMist) in the United States as an option for the control of seasonal influenza," Piedra said.

It also highlights the need for influenza vaccine effectiveness estimates and the importance of the U.S. Influenza Vaccine Effectiveness Network in providing updated information for committee recommendations, he said.