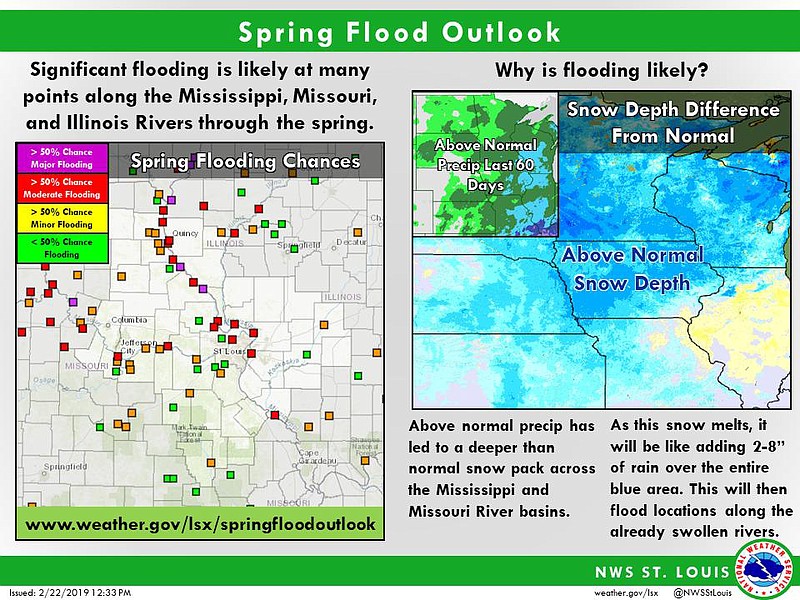 A first-time spring flood outlook by the National Weather Service in St. Louis shows the Missouri River could see significant flooding this year.

"We've been doing outlooks since the late '90s, and this is one of those rare times where we see things coming together which could lead to higher-than-normal levels at many locations," he said. "The Missouri (River), though, is not as bad as what we're seeing along the Mississippi River."

The reason for this year's concern is above-normal precipitation leading to deeper-than-normal snowpack along the river basin this winter. As this snow melts, it will be like adding 2-8 inches of rain in areas stretching from Nebraska to Kansas and into Missouri.

The flood stage on the Missouri River in Jefferson City is 23 feet, and the historical average for the river reaching that point is 61 percent.

This year, they are predicting that average at 88 percent, Fuchs said.

Moderate flooding is considered 25 feet, and they predict a 79 percent chance Jefferson City will see that level this spring.

Major flooding begins at 30 feet. Normally, the chance of major flooding is only 13 percent, but this year it's 29 percent, Fuchs said.

"The key will be whether we have significant rainfall," Fuchs said. "Even if we have a normal rainfall for the spring, we have good chance for moderate flooding."

An average year's rainfall would be 20-25 inches. So far this year, nearly 4 inches of rain has been recorded, Fuchs said.

Areas along the upper Missouri River are not bad in terms of accumulating snow this winter, he said.

"They had more last year, and it was slow to come down," Fuchs said. "The melting season runs into summer for the upper end, and so far that area is near to below-average snowpack, so it doesn't look extraordinary. It's what's below Gavins Point Dam (in South Dakota) where we have concerns."

Fuchs said Missourians shouldn't hear the word drought for a while - unlike last year, when several months of little to no rain took their toll on many parts of the state.

Areas of concern along the Mississippi River in Missouri would be from Hannibal to Cape Girardeau, he said.

"From Iowa - really on down to the Gulf of Mexico - this year could see some really bad flooding, again due to the above-normal snowfall we saw this winter. If we get moderate or significant rainfall, then we're looking at flooding at locations along already swollen rivers."

One piece of good news from this outlook, Fuchs said, is that they are predicting only minor flooding on some of the smaller rivers in Mid-Missouri, ranging from 5 percent below average on the Moreau River to 3 percent above average along the Gasconade River.