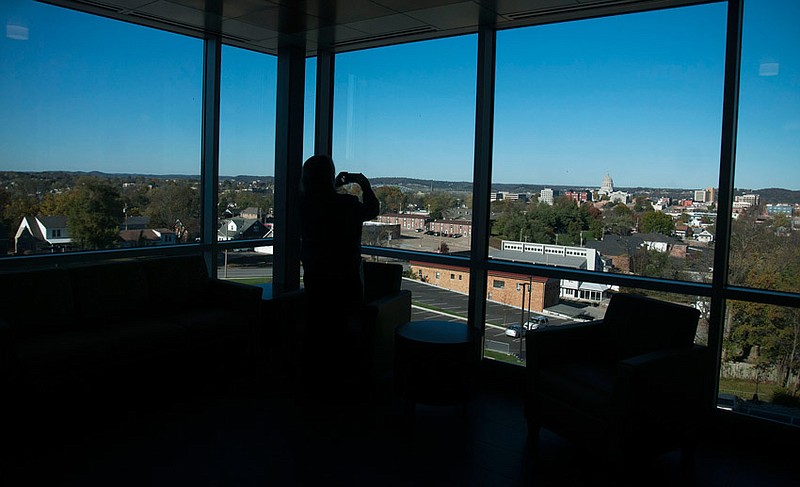 An unidentified woman takes a photo of the Jefferson City landscape on the second floor of the Capital Region Medical Center expansion in this Nov. 1, 2015 file photo.

A woman from Belle has sued Capital Region Medical Center in Jefferson City for malpractice regarding the treatment she received during her pregnancy.

Hannah Buddemeyer is represented by attorney Amy Gunn, of St. Louis. No attorney is listed for CRMC, but hospital spokesperson Lindsay Huhman said CRMC would not comment about the matter at this time.

Gunn claimed Buddemeyer went to the hospital in August 2016 for a laparoscopic and bilateral tubal ligation.

Buddemeyer provided a urine sample for a pregnancy test. Gunn said the level of human chorionic gonadotropin in the urine indicated Buddemeyer was four to five weeks pregnant; however, an unknown technician or pathologist in the CRMC Medical Lab reported her test was negative.

Because her pregnancy test was reported negative, the ligation procedure began, but the doctor doing the procedure stopped when he noted uterine pressures were elevated. When he placed a camera in the area for evaluation, what he saw, he said, "demonstrated the presence of fetal feet."

The doctor reported Buddemeyer had an "intrauterine pregnancy with a negative pregnancy test with an incidental fetoscopy."

A second urine test came back with positive indications of pregnancy, according to the lawsuit.

Doctors performed an ultrasound on Buddemeyer after the second urine test and determined her pregnancy to be 18 weeks along. They also suspected uterine perforation through which fetal feet protruded, along with a hemorrhage within the amniotic fluid and probable separation of membranes, according to the lawsuit.

A couple of days after her first visit, Buddemeyer returned to the hospital complaining of vaginal bleeding. Two days later, she was discharged with a diagnosis of premature rupture of the membrane and given advice on how to "conservatively manage her pregnancy with the goal of fluid re-accumulation."

On Oct. 31, 2016, Buddemeyer gave birth to a boy. He was premature at 26 weeks and had bleeding inside his brain and a brain injury. The boy was hospitalized for nearly three months and was re-admitted for respiratory distress.

Gunn said the boy will continue to suffer developmental delays, intellectual disabilities and physical injuries for the rest of his life.

Along with asking for more than $50,000 in damages, Gunn is including a constitutional challenge in the lawsuit.

The challenge is to House Bill 393, which became effective in August 2005. Gunn claims the law violates requirements in the Missouri Constitution that a bill have a single subject and the subject be clearly expressed in the title.

HB393 repealed various statues, instead enacting 23 new sections relating to claims for damages and the payment thereof. Gunn claims the title is unconstitutionally under-inclusive because the bill addresses multiple subjects and because some of the provisions enacted under the bill relate to claims other than claims for damages.

Gunn said this includes giving the court and not the jury the authority to determine the value of medial treatment to a plaintiff in a lawsuit. Gunn said that violates the plaintiff's right to a trial by a jury who would determine all of the plaintiff's damages without the interference of the Legislature.

Gunn also points out that in August 2017, under the revised statutes of Missouri, an attempt to limit a plaintiff's recovery for non-economic damages against a health care provider is unconstitutional because it violates the plaintiff's right to due process of law.