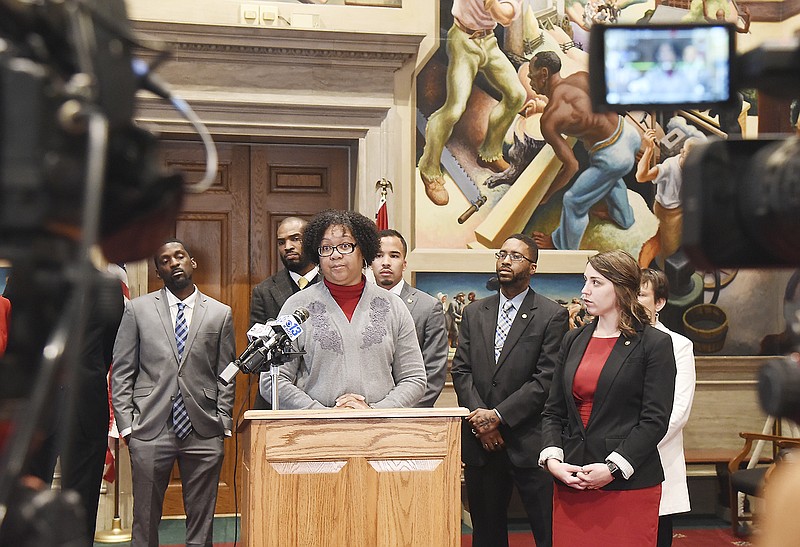 Rep. Barbara Washington, D-Kansas City, along with several members of the Black Caucus and Democrats from the House of Representatives, took to the podium Monday during a news conference to talk about proposed legislation decriminalizing marijuana possession for holding 35 grams or less.

And, they said, they have some support from Republican lawmakers for their ideas.

"Missouri is ranked 10th in the nation for the percentage of our population that is incarcerated," Minority Leader Crystal Quade, D-Springfield, told reporters. "I'm thankful our colleagues on the other side of the aisle are prepared to have a serious conversation about criminal justice reform.

"If we want to truly address crime in our state, we must end counter-productive practices that come down harder on low-income defendants and make it more difficult for past defenders to find jobs and contribute to society."

They also would protect children in juvenile proceedings and help repay people who were convicted wrongly.

"If we can do these things, it will build trust in the system," Quade said, "and Missouri will be much better for it."

"It's a cash-bail reform bill," he said, noting it parallels court system changes outlined by Missouri Chief Justice Zel Fischer in his Jan. 23 State of the Judiciary speech. "Too often, what happens is, you have a defendant with what might seem to be a reasonable bail but, because they're poor, they simply can't afford to pay it.

"And they sit in jail and wait," with "negative cascading effects" such as losing their jobs or their children to the foster care system.

"Or situations where someone is just sitting in jail, waiting, and they plead guilty to an offense they didn't commit," Roberts said, "because they can't wait (in jail) any longer."

Rep. Alan Gray, D-Black Jack in North St. Louis County, would require the courts to require community service work from people convicted of violating a traffic law, local ordinance or a state Class D misdemeanor charge and "who have been determined to have insufficient income" to pay a fine.

Rep. Bruce Franks, D-St. Louis, wants colleagues to return the right to vote to anyone who's been placed on probation or parole after the conviction of a crime.

"In the state of Missouri right now, if you are on probation or parole, you can't vote until you're completely off," he said. "There are 13 other states that say you can vote as soon as you get out of jail."

Rep. LaKeySha Bosley, D-St. Louis, supports a bill doubling - from $50 per day to $100 per day - the state-paid restitution when DNA testing exonerates someone of a crime they have already been convicted of committing.

Rep. Barbara Washington, D-Kansas City - a former prosecutor who now works as a defense attorney - wants lawmakers to pass an automatic expungement of the records of a conviction for marijuana possession, under 35 grams, since Dec. 31, 1997.

"Expungement as it is today is still subject to judicial review and discretion," she noted.

Under her proposal, Washington said: "If you were convicted of marijuana possession (under 35 grams) only - with no other crimes - you would get an automatic expungement."

Changing the law would help some people get jobs or financial aid for education that they're denied under the current law, she said.

Rep. Brandon Ellington, D-Kansas City, would require the state Corrections Department to participate in a federal program that provides security bonds for inmates before they're released from prison, and for those inmates who've been certified to work in a particular field.

"(This bill) would create a plausible pathway to employment," he said, "by having individuals who are currently working (inside) the DOC get certification and/or bonding."

Rep. Ingrid Burnett, D-Kansas City, would prohibit children from waiving their rights to legal counsel in a juvenile proceeding, "under certain circumstances, to assure that they are going to get adequate counsel."

She noted in a news release that children can't sign legal documents now, "and we shouldn't permit them to sign away their constitutional rights" while in court.

Roberts said several of the proposed changes in state law, along with the Supreme Court's announced changes to its procedures starting July 1, "will provide a stronger, uniform template for our courts to follow."

Although not part of the package announced Monday, Quade noted the House Democrats also support improved funding for the state Public Defender System as a key way to improve the state's legal services.