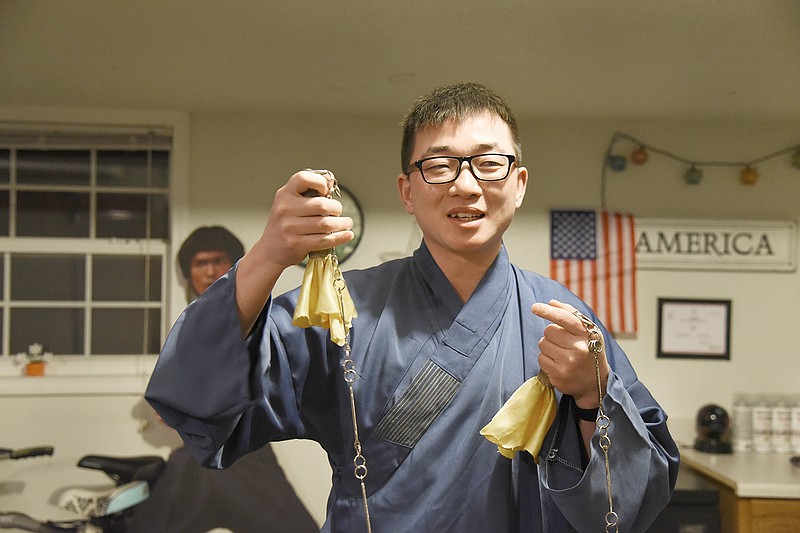 Hu shows his kung fu weapons. Cheng is a Kung Fu and Tai Chi instructor in Jefferson City. During his time in China he learned the arts from monks and brought his teaching style to Jefferson City.

"The Legend of Kung Fu" is the story of a young boy who wants to become a kung fu master. Through his journey as a monk, he overcomes challenges and achieves peace. This show featuring ballet dancers and fast-paced choreography is the most popular traveling show in Beijing, China.

The story is similar to that of Jefferson City resident Hu Cheng.

Born in Henan Province, China, Cheng learned kung fu at an early age. He would grow to master the art, become the lead in "The Legend of Kung Fu" show and bring his art to Mid-Missouri.

When Hu, a shy, quiet child, told his father he wanted to train at the Shaolin Temple at 13 years old, he was able to do just that. He had studied the basics at age 9 and found the art interesting. He noted Jet Li was an early influence for him.

"At first you just feel like it's really hard, but in China the instructors teach you how to be stronger. They are trying to push you really hard," he said. "After half a year I started to feel stronger. My parents even could tell - I started to talk more and be very open."

"In the Shaolin Temple there's a lot of mountains, so that's good to practice your kung fu skills, which is training and climbing mountains as fast as you can," Hu said. "The first three years is all the same thing, and then you can tell the difference depending on how fast you are, how strong you are, how powerful you are, how flexible you are."

After three years of basic training, he chose his professional weapon - a double sword, one for each hand.

At this time he also was chosen from 30,000 students to perform in tourist shows at the temple.

"When I was a kid, I was dreaming I can be on a stage and show people my skills. After these two years' experience on a stage, I feel very, very confident on the stage," Hu said.

He traveled to Beijing in 2005 to audition for "The Legend of Kung Fu." He stayed with the company eight years, traveling to places like Korea and Malasia. He also performed in the 2008 Olympics opening ceremony.

For five years, Hu played the show's lead role, Chun Yi. In 2011, during a 10-month stop in Branson - his first time in America - he met his wife, Jefferson City native Kristin Hu, who was working on the show's marketing.

Hu left the show in 2013 and returned to America to be with Kristin. Now, he's working his first non-kung fu job as a production operator at PFSbrands in Holts Summit.

He teaches private kung fu lessons at home and tai chi classes at the Holt Summit Lions Club. He is certified in TaijiZen, a method created by Jet Li. He also will begin offering tai chi fitness classes weekly at the Jefferson City Shikles Recreation Center later this month.

Hu teaches students the basics of tai chi and kung fu. He laughs when he explains how these arts are different from karate.

"It's neat to see him sharing the culture," Kristin said of her husband. "He got to live his dream, but he's getting to share some of that with people, too."

"When I was on the stage, it was like a dream; it was perfect," he said. "I'm so glad when I was young I was able to do that. I just feel like if I can teach full time, that's my next dream."