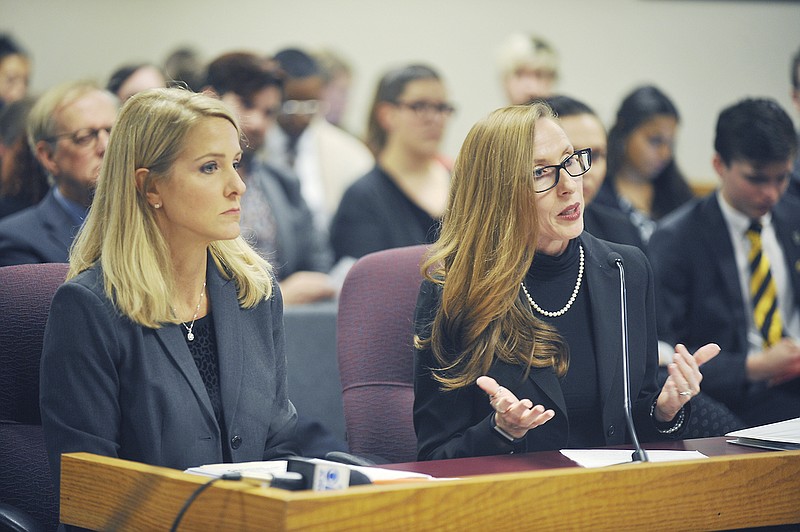 Passed in 1988 during the rise of the AIDS epidemic, Missouri's criminal code concerning HIV is antiquated and doesn't reflect science and medical breakthroughs, witnesses testified during a hearing Monday of the state House of Representatives' Health and Mental Health Policy Committee.

The committee considered House Bill 166, sponsored by state Rep. Tracy McCreery, D-St. Louis, and House Bill 167, sponsored by state Rep. Holly Rehder, R-Sikeston, in a sort of "joint hearing" because the bills are attempts to revise criminal code surrounding the Human Immunodeficiency Virus (HIV) and Acquired Immune Deficiency Syndrome (AIDS), which was written during the burgeoning AIDS crisis of the 1980s and '90s.

Presiding over the proceeding, the vice-chairman of the committee, state Rep. Lynn Morris, R-Nixa, asked because the bills are so similar they be discussed in a combined hearing.

"There are some differences in our bills, but the reason we'd like for them to be heard together is that this is something new we're talking about in Missouri," Rehder said. "Many states are looking at HIV-specific laws.

"We don't have all the answers. We know it lies somewhere in between our bills."

Rehder said the bill sponsors would like to come out of committee with a product both parties can get behind.

Knowledge about HIV has developed substantially over the past 30 years, as have treatments, witnesses said.

"People living with HIV can now live healthy lives with life expectancies almost equal to those without HIV," Rehder said.

It is now a given that HIV can be transmitted only three ways - through unprotected sex, from a mother to a child and through blood.

When Missouri's criminal code concerning HIV was written, there was a lot that wasn't known about the virus and its spread.

Because of what science now knows about HIV - and because a diagnosis of HIV is no longer an almost-certain death sentence - the bills are intended to reduce the severity of the crime somebody faces if they know they have the disease (and some other diseases) and exposes another person to it.

By Missouri law, that is currently a Class B felony - an example would be manslaughter - punishable by five to 15 years in prison.

Rehder's bill would reduce the crime to a Class C felony - comparable to first-degree involuntary manslaughter - punishable by three to 10 years in prison and a $10,000 fine.

McCreery's bill would reduce the offense to a misdemeanor. If the victim becomes HIV-positive, the offense would be a Class A misdemeanor - such as shoplifting items valued at less than $500).

Both bills state a person is not considered to be trying to transmit the disease if he or she is taking practical means to prevent the transfer, such as use of a condom.

Robert Richardson, who served nine years of a 12-year sentence in Kansas related to convictions for exposing two women to HIV, testified in Monday's hearing that his attorney wasn't allowed to tell the jury that neither of the women contracted the disease.

"They were left to assume that it was," Richardson said, "because sentencing was handled by the judge."

Richardson, whose treatment has and continues to make his disease untransmittable, said he was a perfect inmate and - as a "jailhouse attorney" - worked to help others get out of prison. That didn't help his case, he said.

When he went before a parole board and argued his case and told members research was leading to HIV patients leading long, healthy lives, the parole boards scoffed. He was sitting in front of the board with 30 years of research they wouldn't even look at.

Since being released from prison, finding work has been nearly impossible, he said. His background check twice said he's HIV positive.

Nobody is going to hire him, he acknowledged.

He's now working for the first time in almost four years in a volunteer position that just pays the rent.

"I don't know where my life is going from here," Richardson said. "No one cares about my education. No one cares - we think, maybe - because I could have a 'he said, she said' about who disclosed what to whom and where."