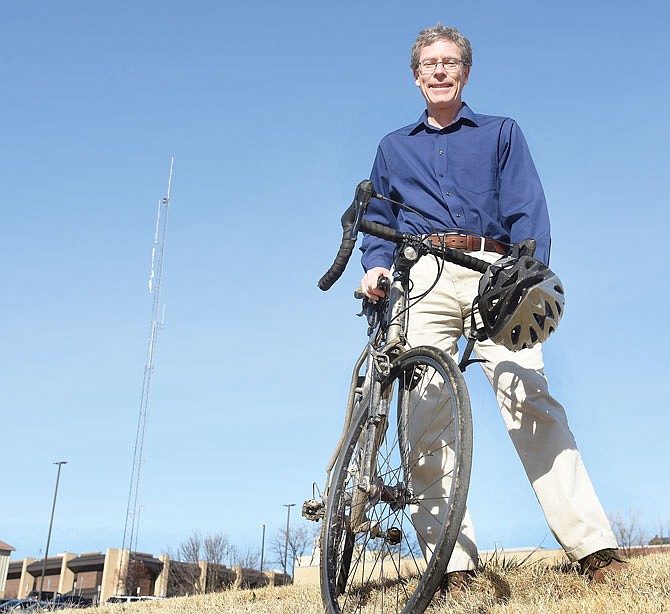 David Bange poses outside of City Hall where he works as city engineer and rides his bicycle to work as much as weather allows. As of Monday, Bange has recorded more than 8,000 miles pedaling this year.

As the year draws to a close, one city employee has beaten a personal record of miles ridden on his bike in one year.

City Engineer David Bange can often be seen riding his bike around town. He rides to and from work every day, and often goes on morning and weekend rides.

This year, he broke his record of miles ridden in one year - on his Monday morning commute to work, he cracked 8,000 miles.

Bange uses a mobile app called Strava to track his rides. He spent 566 hours and 58 minutes riding his bike this year to hit that 8,000-mile mark.

"It actually maps out where you ride, so I can go back to any particular day or any particular ride, and it'll show me the map of where I went that day," Bange said.

On a typical day, Bange gets up early to go on a 20- to 24-mile bike ride before heading to work at City Hall, also on his bike. At the end of the day, he rides home.

Like many people, Bange started riding a bike at a young age and continued throughout his life intermittently, but he really started in earnest about 10 years ago in an effort to get healthier.

"As the years passed, it was maybe, instead of just riding this bike for recreation, maybe I could actually ride it for some purpose, i.e. riding it to work," Bange said.

Bange said he hopes others can learn it's possible to commute on a bike in Jefferson City.

"I enjoy doing it, but the other part is to say that it can be done," Bange said. "People say that Jefferson City is too hilly or too this, or too that, but this is kind of a way of saying it can be done."

As he rides, Bange said he occasionally sees others out riding, and he knows of others who commute on bikes. He hopes he can set an example.

"I would like for it to be an encouragement for other people and to let them know that it's possible, that it can be done," Bange said. "I think it's good for our community to have some choices in how you get around."

Another benefit of having more cyclists on the road is safety.

"Ultimately the more people that you have out there cycling, statistically the safer all the cyclists are," Bange said.

Even the winter weather doesn't stop him from cycling to work and back, although he may go a bit slower. He said if the roads aren't completely clear, it can be harder for vehicles to go around him, too.

"It's not necessarily the snow, it's the slickness," Bange said. "Being on two wheels, you're a little bit more susceptible to sliding."

Outside of riding in the city, Bange does a three-day, 300-mile ride with some friends each year around the state. He said he enjoys riding when he's out of the city.

"You just climb on the bike, see new sights; it's really kind of neat when you're in a new place or when you're on vacation. It's always fun to go bike riding and see things at a little bit slower pace than when you're in a car," Bange said.

As for next year, Bange doesn't have a set goal for miles.

"I didn't think that I was going to get to this many miles this year when I started," Bange said, he was just hoping to ride the 6,000 or so miles he'd done the last few years again. "Next year, I don't know what my goal is. Probably into the 6,000 range again, but who knows. We'll have to see."