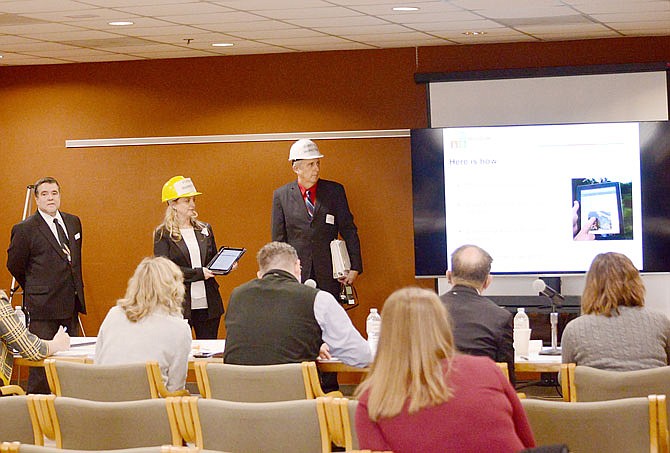 From left, Aaron Forsythe, Tina White and Steve Boone stand in front of judges Friday as they make their proposal for the Department of Natural Resources during the Sow-Me Challenge competition at the Harry S Truman State Office Building. The competition invites Missouri's 16 executive departments to propose their solutions on how to make improvements within the state.

As part of friendly competition, several groups of Missouri state employees have come up with ideas to improve service to the state's residents.

Inspired by the TV show "Shark Tank" and similar competitions, the Show Me Challenge is a way for employees in Missouri's 16 executive departments to identify solutions not only to improve how citizens are served but also to cut out unnecessary bureaucratic work and/or save time and money.

In its first two cycles, the Show Me Challenge received more than 100 proposals from more than 500 team members across the state.

The latest round of the competition started in July and ended Friday with the nine team finalists pitching their ideas to a five-member senior leadership selection committee.

The winners will be announced Monday.

Each member of the winning team will receive $500, senior support and mentorship to translate their proposals into results.

Among the final teams was a group from the Department of Natural Resources.

Jessica Flannery, an executive at DNR's St. Louis Regional Office, was one of the leaders of the group, which is proposing a streamlining of their invoice processing from mostly manual to an electronic system, which should allow for better tracking and reduce the potential for documents to get lost.

"We estimate, if this system were implemented, we could save over 15,400 work hours a year to be redirected for staff to do more work on inspections and bringing faster compliance to any organization that needs DNR regulations," she said. "We worked on the project for about two months. We based it off a need that we saw."

If they win, Flannery said, they would have four months to implement their program and bring back results.

Another DNR team was led by Kari McKinney, who works in the department's Central Office in Jefferson City. Their group pitched an idea of adding solar-powered electricity to structures in state parks and conservation areas where it's too cost-prohibitive to run traditional electricity.

"We receive customer comments, and as we went through them, we found there were repeated comments about a shelter at Stockton State Park," McKinney said. "So that spurred the idea to find a way to do this. We want to look at ways to conserve our natural resources while using renewable energy sources."

If they are selected as the winner, they believe they can implement this project in the next fiscal year, McKinney said.

DNR Deputy Director Katie Jo Wheeler, who was on the leadership selection committee, noted while this cycle included multiple entries from DNR, all departments are encouraged to participate.

"We've watched this evolve and some things folks had ideas about when we had the first round of Show Me Challenge, they weren't quite distilled down to enter the challenge until now," Wheeler said. "We have also benefited from our teams figuring out other persons and agencies that they should work with to come up with the best ideas, so we build those relationships not only for the challenge but in their day-to-day work."

This was the first time Office of Administration Commissioner Sarah Steelman sat on the selection committee. She said this program engages state employees to participate in government.

"It's a way to break down barriers because we're all one team, and that's what we're trying to promote," Steelman said. "You need to get a cross-section of departments, working as teams, on almost every single problem that we face."