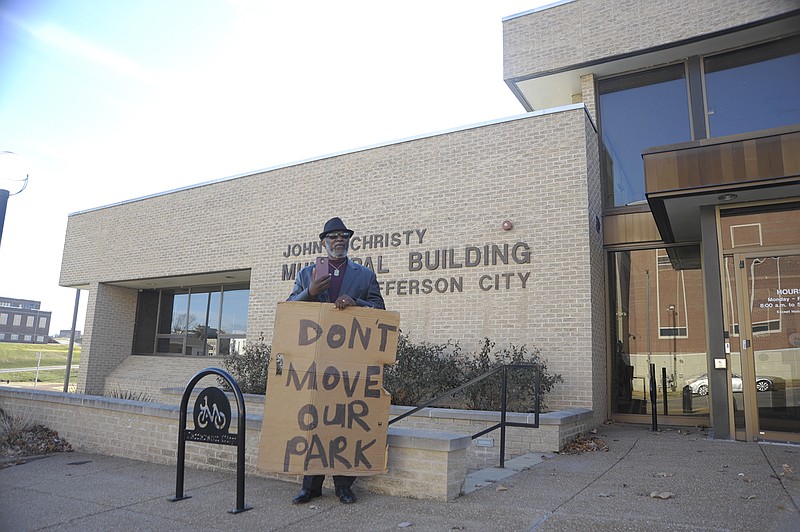 Hans Overman has been protesting the possible relocation of East Miller Park outside of City Hall for several days, often livestreaming the protests on Facebook using his phone.

A proposed idea to expand the Jefferson City National Cemetery and move East Miller Park across U.S. 50 is receiving some opposition from the community.

Hans Overton, a Jefferson City resident who has lived in the area for more than 30 years, has been outside City Hall with a sign every day since the middle of last week.

"Don't move our park," it reads. As he stands outside City Hall, he live-streams on Facebook.

The idea to move East Miller Park, known as the Black Top to some in the area, and expand the veteran's cemetery into the old park space was originally proposed to the Jefferson City Parks and Recreation Commission. In October, lobbyist Tom Rackers and a group of Jefferson City veterans including Leon DeLong presented their idea of moving the park to the commission.

The national cemetery ran out of interment sites in 1969 and is closed for new interments, leading the group to seek space for expansion. While searching for a way to expand, the group suggested the East Miller Park space might be the best option.

Rackers and the veteran's group wants to make sure they can provide a resting place for Jefferson City's veterans.

"We just feel that it's a part of Jefferson City. It's important for the veterans and their families, and it's important to the community that we try to expand it," Rackers said in October.

No decision has been made by any party about the expansion of the cemetery or relocation of East Miller Park at this time, but Overton is already concerned.

He created a petition through the online platform change.org and posted it to Facebook - "Save the Black Top, aka East Miller Street Park." As of Thursday, it has 24 signatures.

"We don't want them to remove the park out of the community," Overton said. "The community has been devastated enough in that area. It's disappearing slowly, and we want to keep the area there and keep the park there."

A green space on the other side of U.S. 50, roughly between Clark Avenue and Chestnut Street, was the proposed site for relocation of the park. It's an area roughly the same size as the existing park, said Chris Leuckel, president of the Parks Commission.

Todd Spalding, director of the Parks Department, said they thought moving East Miller Park would be a good option when the veteran's group came forward because it would not only expand the cemetery but would offer a chance of creating a better park for the area.

"The veterans committee came to us with an idea, with a need, because they were running out of space," Spalding said. "The way I approached this was, 'OK, if we were to remove this park, how could we provide more park services for the communities that are around East Miller Park?'"

Spalding said the park is going to get updated eventually regardless of if it stays or moves. In a master plan rolled out last year, the Parks Department included East Miller as a priority park. In November, the Jefferson City Council approved a bond, not to exceed $7.5 million, for parks improvements through that master plan.

"As director, I would not support anything - and nobody would - that would not provide more recreational activities for the community," Spalding said.

For Overton, moving the park across the highway to East Elm Street isn't a good solution.

"I'm totally against putting it behind the wall. I hate that wall," Overton said. "It's closed off one side of the people, one side of the community. Moving it across the highway isn't something we want to see. We want it to remain where it is."

Overton said he's prepared to put up a legal opposition if the process were to move forward.

The U.S. Department of Veterans Affairs, which regulates national veterans' cemeteries, would be given the current park for the expansion. Funding through the VA would also need to be acquired.

That federal funding is another issue for Overton.

Overton said he wants local children to have the chance to play at a park that has history, a park he took his own children to when they were growing up.

"We're just trying to keep the park there, in the community," he said.

If the VA agrees to the expansion and wants the park land, public input would be sought for what to do with East Miller Park, Spalding said.

"We're not there yet because we don't know what might happen," Spalding said. "When we get word back yes or no, and if they say, 'Yes, we'd like to take this land to expand our national cemetery for our veterans' - which is a huge need - then I would say, 'A huge need is also to provide more parks.'"