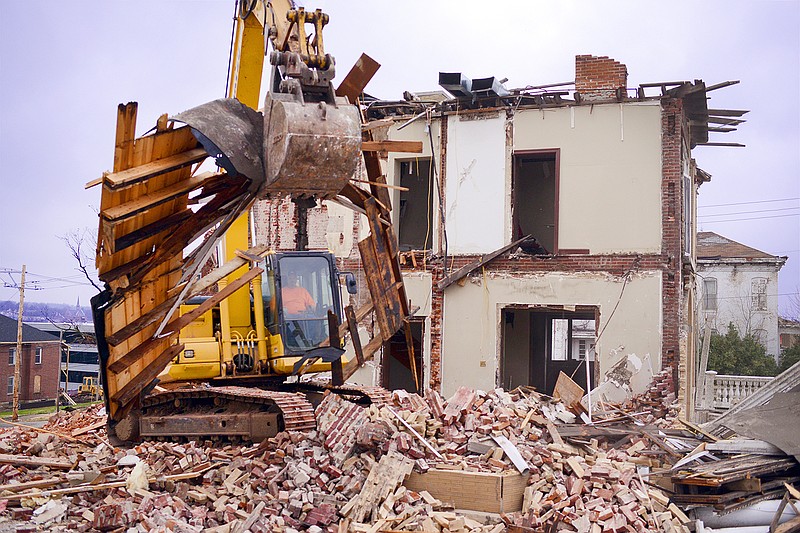 A contractor uses an excavator to pick up debris after half of the Dallmeyer House is demolished Monday at 600 E. Capitol Ave. The building, which housed Burkhead & Associates for the past 14 years, was heavily damaged in the May 22 tornado.

Another historic structure on East Capitol Avenue came down Monday as crews demolished the Dallmeyer House.

The 150-year-old building at 600 E. Capitol Ave. housed Burkhead & Associates for about 14 years. However, the May 22 tornado removed bricks on the east and west walls, causing the walls to shift. The south foundation also shifted, and the tornado tore off the entire roof.

"It's a disappointment that it's coming down, but there's nothing we could do to save it because (of) the foundation shifting in there," Frank Burkhead said Monday. "We prefer to look at it as it's a chapter in the whole book and we're just going to turn the page here and do what we need to do."

The Burkheads said they are not sure if they will rebuild on the property. Since the building is in Jefferson City's Capitol Avenue Neighborhood Conservation Overlay District, they would have to construct a new building to meet the overlay district's design guidelines, as well as ensure the structure meets today's building codes, Frank Burkhead said.

To bring the building back to life would have cost about three times the structure's appraised value before the tornado, Frank Burkhead said. Prior to May 22, the building was appraised at about $550,000, he added.

"I always tell my clients to give yourselves six months to a year to displace yourself from the emotional side of it, so this helps, having it come down finally," she said Monday, fighting back tears. "I can walk past and see the empty lot and say, 'OK, now what am I going to do with that empty lot? What comes next with it?'"

Frank Burkhead said he equates the long road to recovery on East Capitol Avenue to a forest fire - everything will mend itself over time.

"A lot of times the forest comes back stronger and better, so this will come back, but it's just going to take a while to happen," he said. "It's not going to happen overnight, but it'll be neat when we look back down the road 20-25 years and see what's happened to it."

Before demolishing the Dallmayer House, the Burkheads saved several historic features of the building and plan to either implement them in their new office at 3432 W. Truman Blvd. or donate them to the Historic City of Jefferson.

"Historic City of Jefferson is sad to see such a beautiful and historic home lost to the tornado," HCJ Executive Director Anne Green told the News Tribune last month. "We appreciate the due diligence the Burkheads did to ensure there were no other ways to save the building. It's seen a lot of history of our community over the past 160 years."

Frank Burkhead remembers doing homework in the Dallmeyer House when it housed the Missouri Police Chiefs Association, where his mother worked. The Burkheads' children have similar memories, as they spent many summer days and evenings after school playing in the building's upstairs.

When the previous owners listed the property for sale, the Burkheads knew they wanted to move their business into the historic building. They spent about 11 months restoring it before moving in April 2005.

Jefferson City businessman William Q. Dallmeyer bought the double corner lot in 1869, according to a 2014 News Tribune article. The home was remodeled to its neo-classical style in 1910.

"I appreciate how much this building meant to the rest of the community," Carol Burkhead said. "We knew it meant a lot to us, but we have been very surprised and it's been really nice to know it meant a lot to a lot of other people - the phone calls and the letters saying, 'Thank you so much for doing something with this.'"

The Dallmeyer House isn't the only property on East Capitol Avenue to be demolished due to tornado damage.

Earlier this month, the Missouri Association of Counties building - at 514 and 516 E. Capitol Ave. - was also demolished.