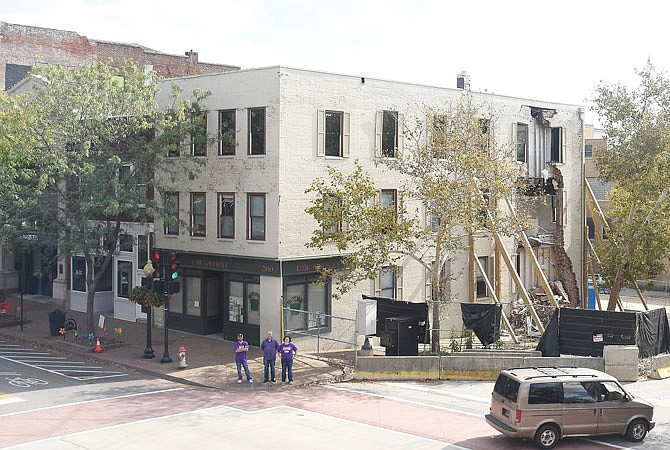 The buildings at 200 and 202 E. High. St. sit in October as decisions are made about what to do with the crumbling building and it's neighbor.

The deadline for the property owners to begin work on the two crumbling buildings in downtown Jefferson City has passed, but it's still unclear when demolition will proceed.

City staff gave Carol and Ruben Wieberg, property owners of 202 E. High St., until the end of Monday to begin repairing or demolishing the building. If they didn't, the city would begin the demolition process today, according to an October notice from City Counselor Ryan Moehlman.

The city is working with the Wiebergs and Neidert Properties LLC, owner of 200 E. High St., on "a potential universal resolution to the situation," Moehlman said in an emailed statement Monday.

The City Council will have to approve the agreement, Moehlman added.

The Wiebergs, city staff and Andrew Neidert, with Neidert Properties, are working on a resolution "which will save our building and selectively demolish Neidert's property so all parties can move forward as soon as possible," Carol Wieberg told the News Tribune on Monday evening.

Neidert did not return the News Tribune's requests for comment.

Neidert Properties applied for a demolition permit in September.

Last week, the Jefferson City Council approved a $300,000 supplemental appropriation to pay for possible demolition of either or 200 or 202 E. High St. The funds will only be used if the owners do not take their own action to demolish by Dec. 9, Sonny Sanders, director of the Jefferson City Planning and Protective Services Department, told the council last week.

City staff also introduced a $283,000 contract with ARSI Inc. to the City Council for selective demolition of the two East High Street buildings last week. The contract and cost could change by the time the City Council is set to vote on it Monday due to additional information Neidert gave city staff.

If the city spends the money to demolish either building, the cost could be considered a personal debt of the property owners and will need to be reimbursed, Moehlman told the City Council.

It's been 18 months since the west-facing wall of the building at 200 E. High St. partially collapsed. Structural engineers determined the wall collapsed due to water infiltration and hidden decay of the mortar in the wall.

Neidert Properties and the Wiebergs learned last fall the common wall between 200 and 202 E. High St. was also failing.

The Wiebergs filed an appeal with the Missouri Western District Court of Appeals in October, asking the court to reconsider Joyce's judgment. The appeal process could take 12-18 months, according to court documents.

The decision regarding the shared wall will be ultimately up to the owners of 200 and 202 E. High St., Sanders has said.

The city ruled 200 and 202 E. High St. were dangerous buildings a year ago and gave Neidert and the Wiebergs deadlines to repair or demolish their buildings, which both property owners missed.

After they missed the deadlines, the city conducted administrative hearings and ruled the city could begin abatement if the property owners did not repair or demolish 200 and 202 E. High St.

The Wiebergs filed a lawsuit against the city in March, asking for a new hearing. In June, Joyce affirmed the city's ruling that 202 E. High St. was a dangerous building and the Wiebergs must repair or demolish the property.