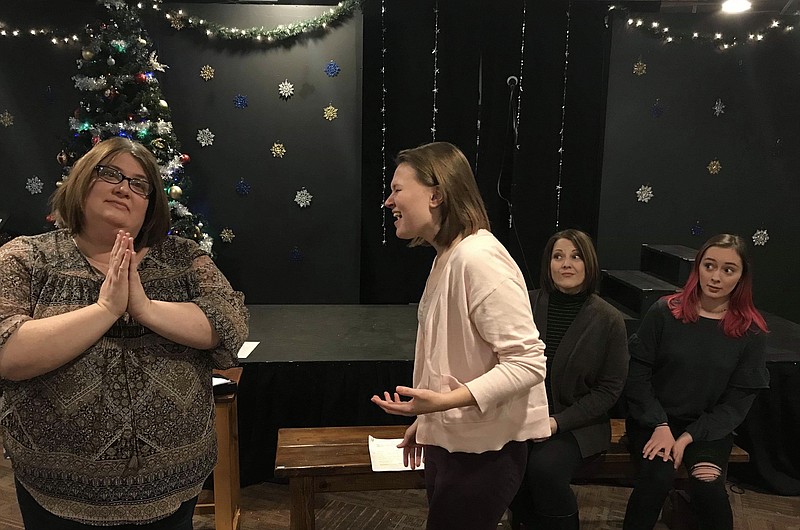 <p>From left, Tracy Wegman, Erin Lammers, Shellie Howser and Hannah Burkybile rehearse “A Man In The House,” an original play by Ben Stumpe that will be shown as part of the “Short Attention Span Theatre: The Holiday Season” at Scene One Theatre. Photo submitted by Mark Wegman</p>

Returning to the Scene One stage with a holiday twist is another installment of the Short Attention Span Theatre.

Featuring an evening of original short plays, the Short Attention Span Theatre began in 2006 and seeks to give local writers a venue for their work.

Mark Wegman, president and artistic director at Scene One, said the upcoming shows would actually be the 11th installment of the Short Attention Span Theatre. And while the plays will feature a lot of humor and some poignant moments, all are centered around the holiday season.

"All the plays were written with the holidays in mind," Wegman said.

For the holiday season, the original work presented will include "The Twisted Pickle" by Mary Jo LaCorte, "A Can of Surge and the Spirit of Christmas" by Deborah Tragasz, "A Holiday First Date" by Leah Drummond, "Enchantment Group Therapy" by Brian Bay, "A Man in the House" by Ben Stumpe and "The Association of Supernatural Societies" by Amy Pringer.

Wegman said the six plays will feature 25 actors, 13 of whom are new to the Scene One stage. Wegman said many of the new faces have done theater with other groups in town, while some are high school students who are just starting to join theater.

And, in a Short Attention Span first, Pringer's play is actually a short musical.

"It's a short little mini-musical," Wegman said, noting he plays a part in that particular play.