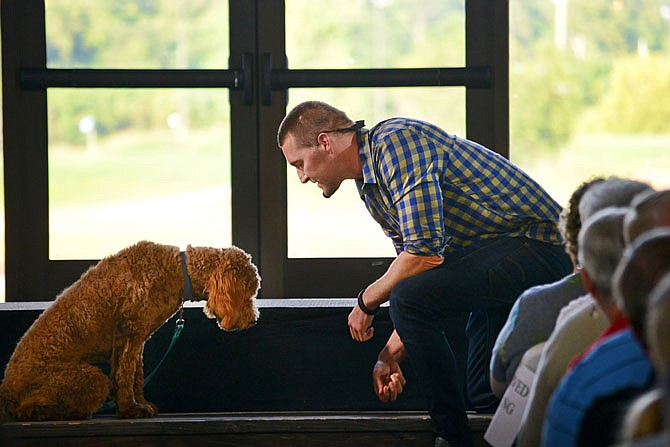 Brandon McMillan, host of CBS TV show "Lucky Dog," teaches Molly, a 4-year-old miniature golden doodle, the "leave it" command during the Court Appointed Special Advocates' "Brandon McMillan Live!" event at Capital Bluffs Event Center. The event served as a fundraiser while McMillan, who also trained CASA's courtroom therapy dog and mascot, Olive, gave insight into his training experience and techniques as he recorded his show in front of a live audience.

Brandon McMillan has filmed more than 150 episodes of "Lucky Dog," a television show in which he rescues dogs from animal shelters and trains them to be devoted pets and oftentimes well-loved therapy dogs.

Three of those dogs he trained in the show stick out in his memory, he told the more than 400 people gathered Thursday evening in North Jefferson City.

"There are three that I can think of that I really shouldn't have let go," he teased listeners.

The first was Sandy, a golden retriever he trained as a service dog for a veteran who lost both of his legs to an Improvised Explosive Device. The second was Charlotte, a dog that was confiscated by animal control for a serious case of neglect. She'd been crippled by some sort of accident and ended up losing a leg.

"She was down to her final hours," McMillan said. "This dog was broken. Life dragged her through the mud. She had nothing left in the tanks."

He'd seen miracles happen before, he told the Jefferson City audience. He got her to trust people, and she was saved. He gave her to a woman who cares for special needs dogs.

The third was Olive.

Olive is the therapy dog for Capital City Court Appointed Special Advocates. The tiny poodle-mix looks like a toy in somebody's arms, he said. But, she has a job and always knew she did, he explained.

When he rescued her, he knew she was a "cute dog," and he wouldn't have trouble finding her a home.

"Nothing in my wildest dreams, that I pictured, was what she's doing now," McMillan said. "I didn't realize when I rescued her from the shelter, what I had sitting in my house."

Olive showed signs that she wanted to be a therapy dog. But, McMillan wasn't picking up on them.

Everywhere McMillan went, she was right next to him. Olive was what trainers call a "Velcro dog," he said.

"I couldn't get away from this dog," he said. "I could go to the fridge. She'd walk in next to me. I would walk outside just to look at the trees. The next thing you know, she's right next to me."

He decided to begin training and testing her for a therapy dog program.

Meanwhile, Lisa Bax, tracked McMillan down and told him about Capital City CASA.

Bax told him about how many children are in the program.

"They actually have to sit there in the courtroom on the witness stand and give the most terrifying testimony," he said. "Those of you who remember when you are 6, 7, 8 years old, you remember that you were afraid to say 'no' to your parents. Suddenly, now you have to be in a court of law - which is scary enough - and you have to look your parents in the eye and tell them exactly what they did."

Since that meeting, three years ago, Olive and Bax - who is Olive's handler and a CASA volunteer - have worked with about 300 children in Cole County Juvenile Court.

There are days when Olive sees 10 children, Bax said.

"Some of these kids she's working with have - maybe - not been socialized with a dog or a pet or any animal," Bax said. "Their first look is curiosity. 'She's cute.' And, then the infectious smile that comes from the kid, because they are in the courthouse and young. They're not supposed to be there. They see her and just smile. They can't help, but want to go pet her."

Twice a month, Olive attends the Juvenile Division of the Cole County Circuit Court. The court handles cases of children who are abused or neglected.

CASA is a volunteer-powered network of people from all walks of life who believe society has a fundamental obligation to make sure children thrive, are treated with dignity and are kept safe, according to the organization's website. Its volunteers, appointed by judges, watch over and advocate for abused and neglected children.

They try to make certain the children don't get lost in overburdened legal and social service systems or languish in inappropriate group or foster homes. The volunteers remain on their clients' cases until the children are placed in safe permanent homes.

The program had been successful elsewhere, but didn't come to Cole County until after Melva Deane Lipsey found her daughter in a fight over a foster child years ago.

Lipsey said her daughter and son-in-law had boys but always wanted a daughter. They filled out the forms to become foster parents and waited. Then, they got a call about a 2-day-old newborn in Kansas City, whose mother abandoned her at the hospital.

But for 2 1/2 years, Lipsey said, the birth mother came back into the picture and wanted custody. She was on and off drugs, Lipsey said. Courts would give her custody, then rescind it when she began using drugs again. The cycle continued until a judge removed the birth mother's parental rights.

"I have a granddaughter who was being shifted back and forth between my daughter and the natural mother. I thought that was a heck of a way to treat children," Lipsey said.

Then, she heard about the CASA program. And pursued the program through Kiwanis Club. CASA eventually set up as a separate nonprofit organization.

In the early days, there were months when the organization had $300 left in its coffers after paying expenses, she said.

Money raised will help support 140 children who are currently in the court system.

"There are another 100 children that need volunteers," Clement said. "We're always looking for new volunteers."

As volunteers complete cases, they are given a respite period, she said. And, there never seem to be enough.

"People think physical and sexual abuse don't happen in Jefferson City," she said. "But, it happens in our community."

The court has 61 volunteer advocates right now and is ready to begin another 10-week class Sept. 10. Anyone interested is asked to call the Capital City CASA office at 573-893-2272.

One woman who intends to be in the first day of classes is Gloria Johnson, of Jefferson City. Johnson has raised her own children and foster children, she said.