Vietnam War veterans remember and are remembered at Capitol 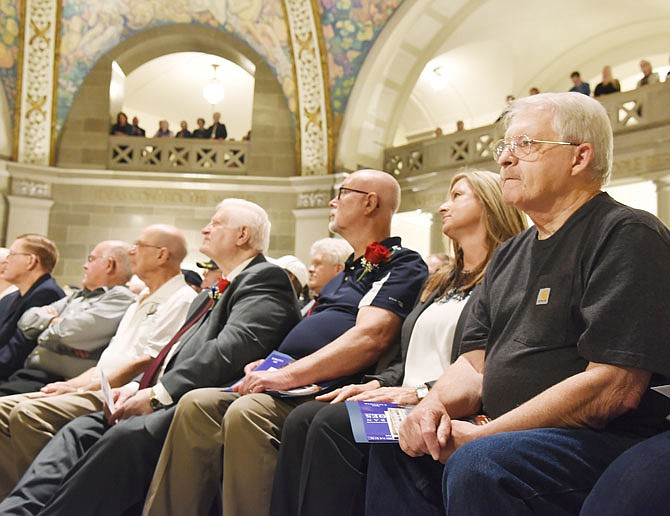 U.S. Army veteran Michael Morgan, at right, was just one of hundreds of Vietnam veterans who were invited to the Capitol Thursday for the Vietnam War 50th anniversary Commemoration Ceremony. His daughter, Michelle Hallford, seated to his right, joined him in the recognition ceremony. The Rotunda was filled with veterans and proud family members who listened as elected officials and directors of state agencies addressed the full house of veteran visitors.

Missouri celebrated its Vietnam-era veterans inside the Capitol early Thursday morning through a ceremony commemorating the 50th anniversary of the war.

Communities, the state and the country wanted to thank the hundreds of veterans and their families who attended the event for their service during the war.

Each year, the Missouri General Assembly sets aside a day for Missouri residents to remember and recognize the courage of veterans who served during the Vietnam War. Its members invite any Vietnam-era veterans (who served in active duty from Nov. 1, 1955 May 15, 1975) to participate.

This year, the Legislature, the Missouri Governor's Office and the Missouri Veterans Commission teamed up to identify the veterans and present them a "welcome home" many never got, said Jamie Melchert, strategic communications director for the commission.

Missouri Gov. Mike Parson, the keynote speaker at the event, who is also a veteran and who served after the Vietnam War, said he wanted to talk to the veterans from his heart.

"I want to talk to you about who you are, who I am and why we're here today," Parson said. "I wouldn't be here today if I hadn't worn the uniform of the military."

As much as a privilege as it is to stand on a stage and address the veterans, it was more of an honor to be among them Thursday, Parson said.

Veterans get honored in numerous ways for their service, he said. But another group that is too often taken for granted is the service member's family back home - the mothers, fathers, wives, husbands, children, relatives and friends.

Those left home "so many times worried and prayed for us," Parson said, "while we were overseas and far from home."

They deserve distinction themselves for their service to the country, he said.

"In today's times, we wonder sometimes where our world's going to, where we're going as far as duty and purpose," Parson said.

He said some politicians today refer to the terrorists who attacked U.S. buildings on 9/11, killing thousands of people, as "those people."

The governor vowed his administration would use whatever power it has - when people do 'come after us' - to hold them accountable to the people of the country.

Missourians cannot sidestep hatred toward the United States, he said. Citizens cannot back down from obligations. They have to stand up for the country.

Parson said he's not ashamed, that when he was a child, he started every day at school with the Pledge of Allegiance, the National Anthem and a prayer.

"I'll never be ashamed of the power of prayer," he said. "And what it does and what it means for our country."

Until he wore the uniform of the U.S. Army, he didn't truly understand the pledge.

When he did wear the uniform, Parson began to understand the meaning.

The sacrifices people made for the country allow us to enjoy the privileges we now have, he said, and it is our duty to make sure the next generation enjoys the same privileges we enjoy.

At the end of the ceremony, state leaders went among the Vietnam veterans and attached U.S. Department of Defense-provided pins to their shirts or lapels.

The lapel pins feature: a bald eagle, signifying courage, honor and service; a blue circle, for vigilance, perseverance and justice; a laurel wreath, representing victory, integrity and strength; stripes, for the American flag; and six stars, for the allies who participated in the war - Australia, New Zealand, the Philippines, the Republic of Korea, Thailand and the United States. The back is inscribed with "A Grateful Nation Thanks and Honors You"

The veterans' families received buttons for the event, said Melchert, who served combat tours in Iraq and Afghanistan.

"When I came back, I was showered with praise," Melchert said. "We had welcome-home ceremonies, and it was wonderful. Vietnam veterans did not come home that way. They were shunned. They didn't get any formal recognition."

Thursday's event was a form of welcome home many years later, Melchert said. The U.S. Department of Defense is trying to take an active role in recognizing Vietnam veterans, he said.

In 1965, Melvin Gregory was among a battalion of 800 men who left the United States to build schools and clinics in South Vietnam and generally help the oppressed people.

They became embroiled in the first major battles of the war. Only three survived. Gregory, of Fulton, was the lone survivor from his company of 200.