Determined speaker shares with students: 'I will get my words back' 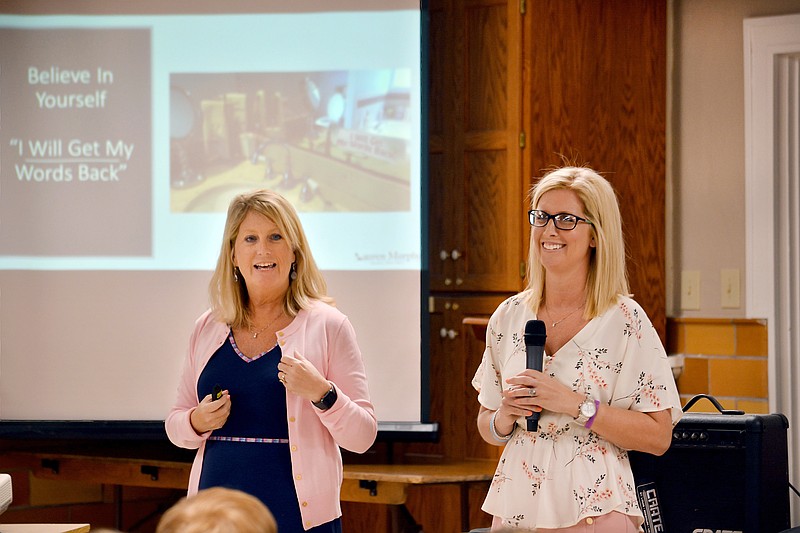 Motivational speaker Lauren Murphy, right, and her mother, Colleen, talk to students Wednesday at Immaculate Conception School. In 2013, Lauren was hit by a vehicle and suffered a traumatic brain injury. She has since worked to inspire those around to never give up.

Murphy takes strength from the people with whom she gets to share her story.

She and her mother, Colleen Murphy, got to tell her story and respond to questions from about 120 fifth- through eighth-graders Wednesday at Immaculate Conception School.

"Six years ago, I was hit by a car. It was not a good situation," she told her audience.

Lauren - who had traveled on business from her home in New York to Los Angeles - at about 8 a.m. that February morning six years ago was training for a marathon, and running along Hollywood Boulevard. She reached a crosswalk and thought she had about seven or eight seconds to cross. A turn lane blocked her view of oncoming traffic and she was listening to music through her ear buds, so she couldn't hear the horns of cars honking to warn her of oncoming traffic.

"I got chills," Lauren said as Colleen explained what had happened.

A car struck Lauren as she ran through the intersection, causing serious injuries to her head.

She suffered a severe traumatic brain injury. The violence of the strike had caused her brain to shift to one side.

Paramedics rushed her to a hospital emergency room, where doctors removed part of her fractured skull to allow her brain to have room to swell. Despite the additional room, they still had to remove part of her brain - the part that controls speech.

Because Lauren had been running, she wasn't carrying a purse. Not knowing she had identification tucked beneath her phone case, investigators had to go into her phone to find her next of kin, which took about five hours.

Her parents, who live in St. Louis, rushed to be by her side.

Lauren, who struggles to find words, said she went through a "rough few weeks."

"We didn't know what her future looked like," Colleen said. "I didn't know someone could live without part of their brain. There were a lot of ups and downs and a lot of really close calls. We didn't know if she was going to make it."

Lauren said her skull - at least on the left side - is now made of plastic.

She was in the hospital for 127 days.

Lauren was like an infant again, Colleen told the students.

"I couldn't even hold my head up," Lauren said.

She had to learn to make eye contact, how to stand and how to balance.

Lauren had lost the use of her right arm because of the brain damage.

At first, she had to learn to put socks on with only one hand. However, even her left hand was moving very slowly.

"We had to be her cheerleader and teach her to use that right hand again," Colleen said.

As countless people offered multiple kind acts toward the Murphy family, well wishes flooded in from all around, Colleen said. Lauren has received "buckets and buckets" of cards and letters.

Celebrities have reached out to her.

Taylor Swift visited her room in the hospital.

"I slept through the whole visit," Lauren lamented. "I was just asleep and was not with it."

Although she didn't meet Swift then, Lauren went to a Swift concert about two years later and was invited backstage to meet with the performer.

And when asked, the Immaculate Conception students shared their best ideas for helping others recover from similar situations.

Spend time with them, show kindness, give them a hug or pray, the students offered.

"Lots of prayer," Colleen said. "That's something that we learned. There's not so much you can do that can change what's going on with your loved one, or the situation that you're dealing with. But people can just make you feel so much better - just knowing that other people care."

The cards and letters she has received remain in Lauren's room in her parents' house.

"They're all piled in my room," she said. "There are piles and piles. They're amazing. I get them out and I look at them."

As Lauren's recovery continues, one of the most challenging and frustrating parts for her remains her aphasia - her loss of ability to understand or formulate words.

Colleen told the students that about 60 percent of stroke victims suffer from some form of aphasia. Because the portion of her brain that was removed was the language center, she has all forms.

She has trouble understanding, speaking, reading and writing, Colleen said.

Every word for Lauren is a struggle.

"I feel angry and frustrated," Lauren said. "And aphasia is so hard."

After her accident, doctors said Lauren would always require a feeding tube. They said she'd never regain strength in her right arm, walk again or be able to speak or even understand words.

They were wrong, Lauren said. She told the students to believe in themselves.