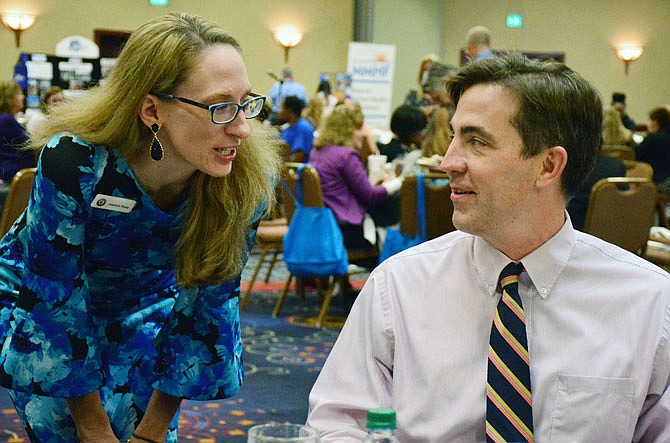 Jefferson City Rep. Jay Barnes said the divide between political parties has widened, creating difficulties resolving basic questions, such as how to end poverty in Missouri.

Barnes, a Republican, spoke as a member of a panel formed to discuss Missouri's political policies and their effects on poverty.

The panel was part of the 2018 Missouri Poverty Summit, held Thursday at the Capitol Plaza Hotel.

Missourians to End Poverty - a coalition of individuals, businesses, organizations and government agencies that have joined together to assure people have opportunities to reach their full potential and to participate in thriving communities - and other individuals discussed ways to build resilient communities throughout the state.

Barnes, one of five panelists, was the first to respond. Barnes said he thinks the government has a responsibility to create and maintain a society where regardless of who someone's parents are or where they were born, they have the opportunity to live a meaningful life.

"Which means free from hunger, access to affordable health care and access to educational opportunities," he said. "And that those who work hard and play by the rules - Bill Clinton's phrasing - have a chance to make it in society."

He said the country is "fraying right now."

"A central fallacy of Republican conservative ideology right now is that those who have money earned it and the corollary to that is that those who don't - have no money (because) of their own fault," Barnes said.

There are also problems on the other side of the aisle, he said.

"Those corollaries are that the people who have money didn't earn it, and that those who are poor are there because someone else is holding them down," Barnes said. "And I see, we live in a society where the rational, pragmatic middle is dying and has no space for dialogue where we can reach common ground on questions such as this."

In the long term, it frightens him for the future of the country, Barnes said.

The summit comes on the heels of the release of the 2018 Missouri Poverty Report and data from the U.S. Census Bureau that shows the state's poverty rate is 13.4 percent.

Tamara Kenny, another panelist who is the director of advocacy and community engagement for Catholic Charities of St. Louis, said poverty is a problem Missouri is capable of solving. Kenny said government, like faiths, is concerned with the common good - providing education, maintaining infrastructure, encouraging economic growth and insuring public safety.

"Isn't it likewise - in the interests of the common good - to create a Missouri in which people have a real opportunity to escape poverty?" Kenny asked. "To contribute to their families, to their communities, to the state."

Hirsch later asked what pieces of public policy help and hurt the poor.

"I think Missouri's failing in this regard in several different ways," Barnes said.

He said he was one of few legislators who sponsored legislation that "had a prayer" of increasing eligibility for Medicaid in Missouri.

"We failed dramatically two years running," Barnes addressed Brian Colby, a panelist and policy director of the Missouri Budget Project. "We did increase eligibility for foster care. We did get that win."

Barnes said it was a small win, but it was huge for each of the children.

On some issues, he said, it goes both ways.

Colby said Barnes was being humble, that Barnes had moved the discussion "a long, long way, with great peril to his political career."

He'll be found to have been on the right side of history, Colby said.

The event featured keynote addresses from the Rev. Liz Theoharis, founder and co-director of the Kairos Center for Religions, Rights and Social Justice and co-chair of the Poor People's Campaign, and Jason Purnell, associate professor at Washington University's Brown School.

Purnell started with an essay he wrote several years ago. That essay begins with a quote he heard that struck him while he was part of a committee on African-American health. A client of one of Purnell's colleagues told the colleague, "If you want to lower my blood pressure, help me pay my electricity bill."

That speaks to the wisdom about the lived experience of people who monthly struggle to pay their electricity bills, and to the social factors tied to health outcomes, he said.

"Having economic resources, having a job, having a quality education, turns out to be a very powerful health intervention," Purnell said. "Health care alone is not going to fix health disparities. And it's not going to get us to healthy communities."

The social determinants of health, according to the World Health Organization, are the conditions in which people are born, grow, work, live and age, and the wider set of forces and systems shaping the conditions of daily life, he said.

A broad set of forces and systems drive health outcomes.

Purnell said a 2014 report made six recommendations to improve health outcomes for the St. Louis region. They were: invest in early childhood programs; help low- to moderate-income families improve economic opportunities; invest in coordinated school health programs; invest in a full range of mental health services (including better data, treatment and access); invest in quality neighborhoods (so they have grocery stores, banks and transportation); and address chronic and infectious diseases in terms of prevention and management sides.

The Missouri Foundation for Health funded a study called "Why are Death Rates Rising Among Whites in Missouri?" that found in rural counties that the rates among whites ages 25-59 increased from 1995-2014. The leading causes of excess deaths - those that happen before an average life expectancy - were drug overdoses, suicide, alcoholic liver disease and chronic lower respiratory disease (caused mostly by smoking). In what are being called "deaths of despair," many deaths occurred because of drug or alcohol abuse and suicides.