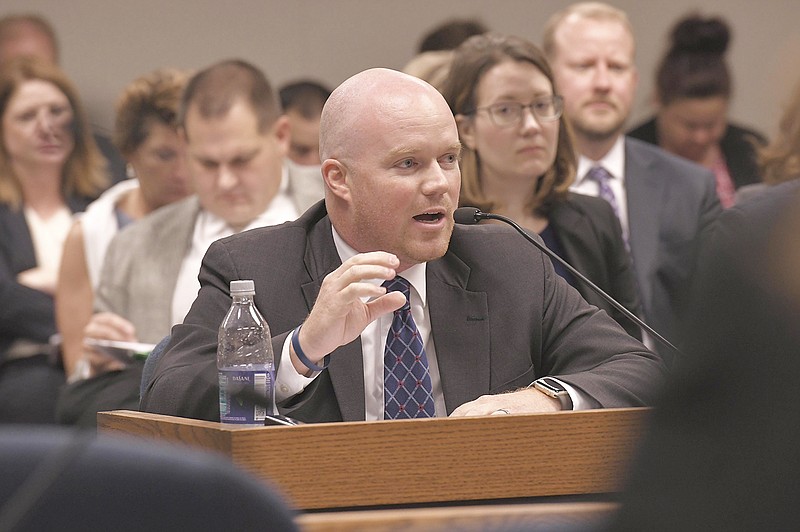 In this Sept. 11, 2018 photo, Rep. Travis Fitzwater introduces a bill during a meeting of the Workforce Development Committee of Missouri House of Representatives.

A local state representative's bill regarding computer science and STEM curriculum - revived in special session after Gov. Mike Parson's veto of the Senate version in July - once again advanced in the legislative process Tuesday with a unanimous "yes" vote and broad support from economic and education groups that see it as a first step to prepare Missouri's economy for greater investment by the tech industry.

"We need to prove to companies in Kansas City and throughout the entire state of Missouri that there will be a future workforce here, and this doesn't solve all those problems, but it's a great first step," KC Tech Council President Ryan Weber told the House Workforce Development Committee during its meeting Tuesday, of which video was archived on the House website.

Fitzwater's bill took a long path to get to that committee meeting. Language of his House Bill 1623 last year was worked into Senate Bill 894, which passed through the Legislature in the spring with unanimous Senate support and House support of 121-19.

Parson vetoed the Senate bill because he said it was too narrowly tailored to one specific provider of a science, technology, engineering and math online curriculum program for middle school students. However, Parson then called the special session in part to get a revised version of the bill passed because of the importance of getting more students into STEM fields.

Fitzwater told the Workforce Development Committee - which he's vice-chair of - that after negotiating with the governor's office, the number of standards an online curriculum provider would have to meet to be considered for award of a contract is now four of six.

Originally, there were 12 standards a provider would have had to meet to be considered, but Fitzwater said he took the advice of state Sen. Jill Schupp, D-Creve Coeur, during the spring session to instead use a majority of the standards - seven of 12 - as the requirement.

"We did that to ensure that it wasn't narrowly tailored," Fitzwater said. "That's why I don't think the bill should have been vetoed in the first place."

Fitzwater said there have been no substantive changes and only a few minimal clarifying changes to the computer science part of the bill, which asks the state's Department of Elementary and Secondary Education to develop a policy allowing high school students to take a computer science course in place of one unit of math.

That point was the source of the only opposition to the bill Tuesday, from the Missouri Association of School Counselors. The association's concern remains the same as when Fitzwater's original HB1623 was in front of the same committee in January, which is that students won't get enough math credits in high school, interfering with their college plans.

Fitzwater said the bill has been discussed at length with higher education institutions, especially the University of Missouri System and its flagship school in Columbia, "and they were a large reason why we have the requirement (in the bill) that a parent or guardian has to sign off on (their student) taking that class so that students will know early on that if they take a class it could impact their entry requirements."

He said after a question from state Rep. Gretchen Bangert, D-Florissant, that it "would be a common sense thing to do" after the current bill is signed to ask DESE about creating a standardized form for all school districts in the state for parents or guardians to sign.

Fitzwater added: "The thing that's great about what this bill does with the computer science piece is that when there are standards in place, then (colleges) know exactly what they're getting from those classes. Right now - for instance, at my rural school district - if New Bloomfield School District decides to do a computer science class, but it's really a keyboarding class, Mizzou has no way to know whether there are appropriate standards for what their entry requirements are for a computer science student."

"There are currently 44 states that have legislation in place around computer science education. Missouri has nothing. There are 40 students that allow computer science to count towards a graduation credit, Missouri is one of the 10 or 11 that does not," said Katie Hendrickson, director of state government affairs for the nonprofit computer science advocate Code.org.

After the Workforce Development Committee's 11-0 support Tuesday afternoon, Fitzwater's bill passed on to the House Administrative Oversight Committtee - where it also passed Tuesday with a unanimous 10-0 vote.