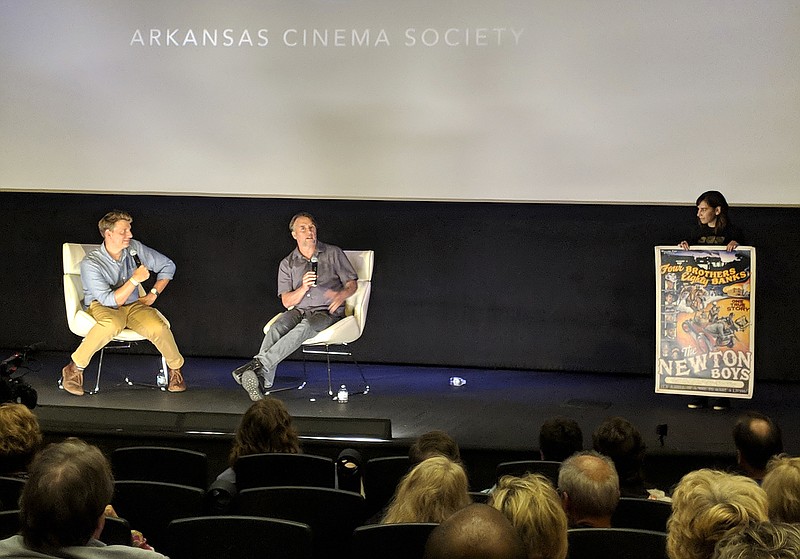 In this Aug. 23, 2018, photo director Richard Linklater tells filmmaker Jeff Nichols about a poster he had made for one of his earlier films, "The Newton Boys" at a film festival in downtown Little Rock, Ark. The festival, Filmland, was hosted by the Arkansas Cinema Society which was founded by Arkansas natives Jeff Nichols and filmmaker Kathryn Tucker. (AP Photo/Hannah Grabenstein)

LITTLE ROCK, Ark. (AP) — Two years ago, Little Rock native Jeff Nichols wanted to organize special screenings of his science fiction drama “Midnight Special” and his historical biopic “Loving” for his home state. However, he found there was no simple way to get the word out, and each time he returned he felt like he was “reinventing the wheel.”

At the same time filmmaker Kathryn Tucker was mourning the loss of the Little Rock Film Festival, so in April 2017, she paired up with Nichols to help create the Arkansas Cinema Society. Based on the Austin Film Society, which has year-round programming and which Nichols said he benefited from when he moved to Texas, the Arkansas Cinema Society hosts annual curated film festivals in downtown Little Rock as well as smaller events throughout the year.

For Premiere, the society flew in three out of state filmmakers for five events. This year’s four-day festival, Filmland, quintupled that, flying in 15 filmmakers — plus drawing 10 Arkansas filmmakers — for a dozen events.

“We ended up with an embarrassment of riches,” said Tucker, who serves as the society’s executive director. Oscar-nominated director Richard Linklater, Arkansas native Mary Steenburgen and husband Ted Danson, and comedian Will Forte were among Filmland’s guests.

All three of the films screened, plus an “Arkansas Shorts” event comprising seven short films, were part of Filmland’s “Arkansas Program,” which highlights art created in Arkansas or by Arkansas artists.

That kind of local support system, visibility and connective network is one of the main reasons they formed the society, said Nichols, who chairs the society’s board. Growing up in Arkansas, Nichols said he felt isolated from filmmaking, with few examples of filmmakers from his home.

“I lacked being able to look at someone and hear from someone who’s actually doing it and really did kind of feel invisible here, this little kid from Arkansas,” Nichols said.

Tucker and Nichols are happy with the society’s growth — they’ve got more than 100 members now, though both said they want that number to be much higher, since more paying members means funding for more programming.

The society already produces some smaller events year-round. However, Tucker and Nichols hope to expand the society’s reach beyond a big August festival and other less frequent events. Tucker envisions monthly panels with industry professionals and concurrent weekends where three or four cinematographers, lighting directors, producers, editors or other experts could come and lead a workshop “that actually teaches people how to light or editor or produce or schedule a film,” Tucker said.

Nichols also hopes the events can someday spread beyond Little Rock hopes by finding independent, single screen theaters throughout the state and organizing special screenings. Ultimately, he wants the society to form a “statewide umbrella — connective tissue for different disparate organizations and filmmakers and film communities.”

The society recently announced funding for travel grants, an idea Nichols borrowed from Austin. Any filmmaker from Arkansas or who makes a film in the state, and has it screened at a festival, can apply for a small travel grant.

“These grants aren’t going to pay for anybody’s film,” Nichols said, adding the intention is to give a small incentive to less conventionally successful filmmakers.

Beyond fundraising, an annual festival draws filmmakers to collaborate, discuss, and hopefully make more Arkansas films, a dream of Tucker’s.

The society is a little young for those connections to bear fruit yet, Nichols said. But one film screened this year, “Antiquities,” was the result of a collaboration between filmmakers Graham Gordy and Daniel Campbell who met at the now-defunct Little Rock Film Festival.

Nichols did meet a 13-year-old boy who attended Premiere and returned this year for Filmland, and who asked Nichols for advice on pitching his first feature film to a major studio.

“He’s sitting in every screening, every Q and A — that kid’s going to do something,” Nichols said.