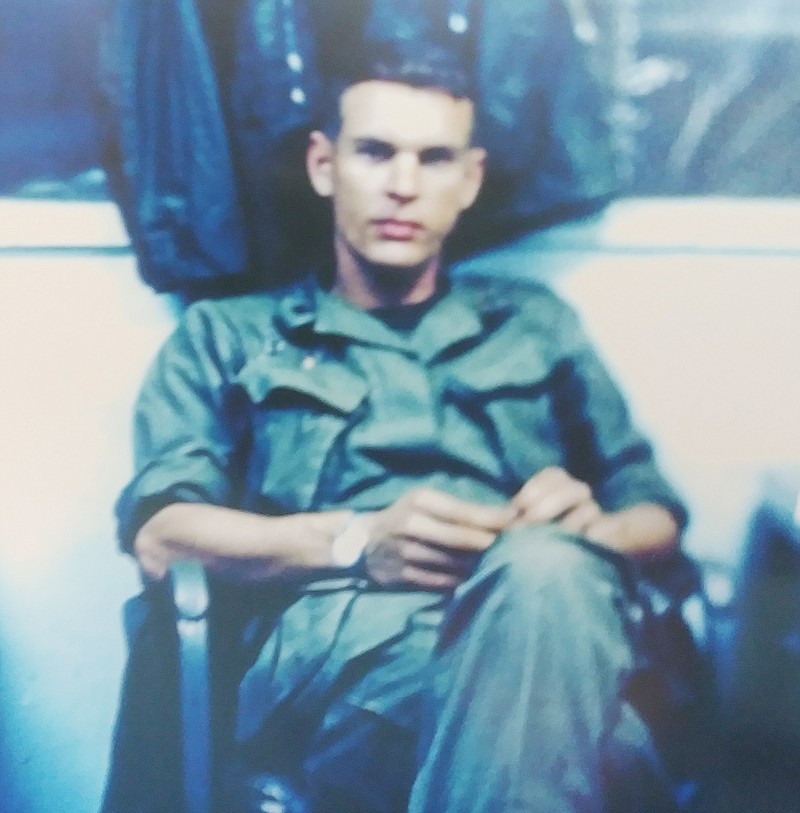 A 26-year-old Tom LeComte is pictured in 1968 while serving as a Huey pilot with the 189th Helicopter Assault Company in Vietnam.

Tom LeComte's decades-long military career spanned the U.S. Navy, U.S. Army, the National Guard of two states and the Army Reserve, and included service as an enlisted man, a warrant officer and, finally, a commissioned officer. When describing the breadth of his impressive experiences, LeComte asserts this entire period was punctuated by the year he spent in combat as a helicopter pilot during the Vietnam War.

Born and raised in a small community in Wisconsin, LeComte graduated from high school in 1960 and made the decision to enlist in the U.S. Navy.

Completing his basic training in San Diego, the 18-year-old enlistee traveled to Memphis, Tennessee, to attend nine months of advanced training as an aviation electronics technician.

"There was a lot of math in the course," said the veteran, "and we covered everything from basic electronics to operating and repairing advanced radar equipment used on various types of aircraft."

He returned to San Diego in late spring of 1961 to complete a three-month course in advanced electronics and was then transferred to the former Naval Air Station at Barber's Point, Hawaii, where he was assigned as a crew member with a naval patrol squadron.

"We operated throughout the Pacific and even flew the Sea of Japan aboard the P-2V Neptune - a patrol plane used primarily to search for Soviet submarines and to track ships that we suspected to be Russian," LeComte said. "I started out as an electronic countermeasures operator and then worked up to a radio operator."

As the former sailor explained, their Cold War service often placed them in situations where Soviet fighter jets would intercept their aircraft.

"They would fly up next to us and we would just wave at them," he mirthfully recalled. "They wanted to let us know that they were watching us."

Finishing his enlistment in June 1964, LeComte returned to Wisconsin and began working for a local company. He started taking flight lessons at a nearby airport in his spare time; however, when a friend told him that he had joined the Army and was going to receive training to become a helicopter pilot, the former sailor found a new career direction.

"I enlisted in the Army in the fall of 1967 to attend helicopter flight school," LeComte said. "I figured there was no need to pay for flight training when the Army would provide it to me for free.

"The worst part was that I had to go through Army basic training at Ft. Polk, Louisiana."

After his basic training, he attended his primary flight training at Ft. Wolters, Texas, in early 1968. He then transferred to Ft. Rucker, Alabama, where he was trained to pilot a historic aircraft that would help define the Vietnam War - the UH-1 Iroquois helicopter, referred to as the "Huey."

"I graduated my flight training in April 1968, became a warrant officer and spent several weeks at Ft. Eustis, Virginia," he said. "But that September, I got orders for Vietnam and was assigned to the 189th Assault Helicopter Company at Camp Holloway (near Pleiku in Central Vietnam)."

Initially, he explained, his duties were that of a co-pilot flying a range of missions from troop insertions, resupply and delivery, and medical evacuations when needed. However, after only two months in country, he progressed to being a pilot in command of his own helicopter.

"There were times we would go out with gunships and drop CS gas (tear gas) canisters that would pop and dispense, forcing enemy troops to flee from inside their cave networks," he said. "Once the enemy bolted from the caves, the gunships took care of the rest."

During the balance of his tour, LeComte spent a portion of his time piloting a gunship and, in September 1969, returned to the United States for reassignment to Ft. Carson, Colorado. It was here that he left the ranks of warrant officer and received a direct commission as an officer.

"I ended up leaving the Army in 1971 and two years later became a full-time maintenance officer with the Colorado National Guard," LeComte said.

Several years later, in 1981, he met and married Patty Henke and the couple moved to Iowa when he was hired as a facility commander with the Iowa Army National Guard.

Leaving the National Guard in 1990, Tom, his wife and their two children, moved to Taos to be closer to his wife's family. Throughout the ensuing years, he finished his military career in the mid-1990s, retiring as a lieutenant colonel with the Army Reserve and later working five years with the State Emergency Management Agency in Jefferson City.

When looking back on a military career that included time with several components of the military, LeComte explains that much of the success he experienced in the latter years of his service was a direct result of his early aviation encounters during the Vietnam War.

"Several years ago, when I was with the Iowa National Guard, we flew missions in Alaska alongside a unit from another state that was made up of younger pilots who, unfortunately, were not performing very well," LeComte said.

"A general came to me and said, 'The reason you Iowa (National Guard) pilots do as well as you do is that you are all Vietnam vets and know how to handle tough situations.' The general also said that the new pilots coming out of flight school didn't have the experience that we did."

Pausing, LeComte added, "The time I spent in Vietnam was filled with some interesting situations and certainly put my head on straighter. When you see people die, lose friends in combat while working seven days a week, 52 weeks out of the year, it tends to have quite an impact."