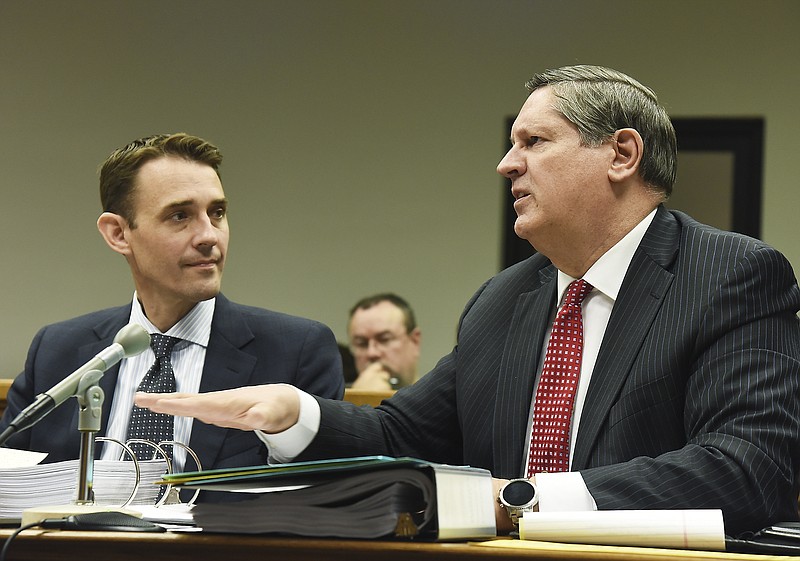 Cole County Senior Judge Richard Callahan said Monday he expects to have a ruling next week in the lawsuit challenging Missouri's new law requiring a photo identification as the easiest way to cast a vote at the polls.

He gave lawyers for both sides until the end of Wednesday to submit any final briefs in the case.

They argue a 2016 voter-approved amendment and the enacting legislation adding the photo ID language to Missouri Constitution don't "eliminate the express, constitutional right to vote" that already is defined in two different places in the Constitution - and they want Callahan to block enforcement of the law during the Nov. 6 general election.

"Plaintiffs started this case talking about the right to vote, and the unique place it holds in our democracy," lawyer Uzoma Nkwonta, of Washington, D.C., told Callahan at the beginning of Monday's final arguments in the trial that began last week.

"We have stressed that throughout (the trial), because this court will be called on to determine what the fundamental right to vote means at this moment in the state of Missouri," he told Callahan. "We have, on one hand, several constitutional provisions in Missouri that make it unmistakably clear - that the right to vote is fundamental and is of utmost importance."

Their lawsuit cited the state Constitution's Article I (the Bill of Rights), Section 25, which says: "That all elections shall be free and open; and no power, civil or military, shall at any time interfere to prevent the free exercise of the right of suffrage."

And they pointed to Article VIII - which deals with "Suffrage and Elections" - Section 2, which sets the qualifications of voters: "All citizens of the United States, including occupants of soldiers' and sailors' homes, over the age of eighteen who are residents of this state and of the political subdivision in which they offer to vote are entitled to vote at all elections by the people."

But, Deputy Attorney General Ryan Bangert countered, voters approved the amendment, so it must have meaning.

The amendment added a new section to Article VIII in the Constitution: "A person seeking to vote in person in public elections may be required by general law to identify himself or herself and verify his or her qualifications as a citizen of the United States of America and a resident of the state of Missouri by providing election officials with a form of identification, which may include valid government-issued photo identification. Exceptions to the identification requirement may also be provided for by general law."

Lawmakers passed the enabling law at the same time they sent the proposed amendment to the state ballot - and wrote the law so it could go into effect only if voters approved the amendment.

Callahan listened to evidence and witness' testimony over three days last week about the law's provisions that people who show specified kinds of photo IDs - including state driver's and non-driver's licenses - can cast a ballot with no trouble.

Missourians who present another ID that doesn't have their photo still can vote - if the document, such as a voter identification card, bank statement or utility bill, has their name and address on it - and agree to sign a statement acknowledging who they are and swearing, under penalty of perjury, they don't have the accepted form of ID and understand they can get a free photo ID from the state, if necessary.

If they don't have any form of identification with them, voters can cast a provisional ballot that will be counted only if they return to the polling place with proper ID before the end of that election day - or if the county clerk's staff can match the voter's election day signature with the one on file for the registration.

"This package of items are all clearly constitutional and clearly not in conflict with the right to vote - because the voters put it right there in the Missouri Constitution," Bangert explained.

Callahan raised a number of questions during the lawyers' presentations, getting some answers Monday and saying the attorneys also could provide answers in their final briefs.

The judge appeared to agree with the plaintiffs that the sworn statement required for voters who don't show a photo ID includes inaccurate information.

Bangert said the statement could be rewritten without affecting the overall law, while Nkwonta argued the state was saying that, since voters approved Amendment 6, the Legislature could change the voter ID rules in any number of ways, including a requirement every voter show a U.S. Passport in order to cast a vote.

Bangert reminded Callahan that the judge's duty is to harmonize the existing constitutional language with the new addition.

The plaintiffs also argued the educational campaign required by the new law also had mistakes, but Bangert said there was no evidence voters had been confused.

And, he said, even though several of the plaintiffs' witnesses testified about problems at the polls, all of them ultimately were able to vote.

Nkwonta said: "There is no way to measure (how many) were turned away from the polls" without being given a chance to vote.

He also argued the state had not presented "a single example of voter impersonation fraud," when that's the fraud lawmakers said they wanted to stop with the photo ID law.