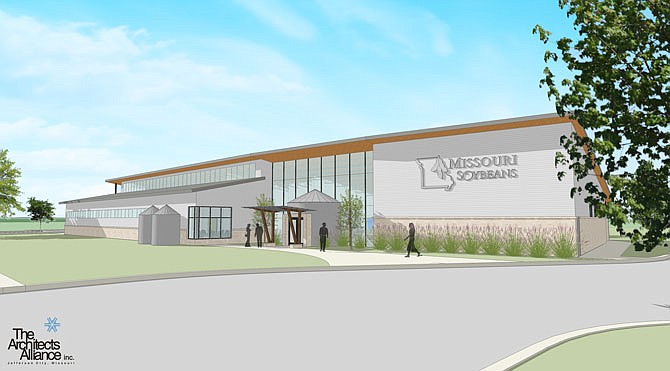 A rendering from the Architects Alliance shows the Center for Soybean Innovation, a 14,300-square-foot building at 734 S. Country Club Drive that will be used to educate soybean farmers. Construction began two weeks ago.

Two weeks ago, construction started on the Center for Soybean Innovation, a 14,300-square-foot building at 734 S. Country Club Drive the groups hope to use to educate soybean farmers. Once complete, the groups also hope to use the center to educate the public about soybean farming and soybean uses in industrial products.

Gary Wheeler, Missouri Soybean Association executive director, said farmers will be able to learn about topics ranging from financial literacy to farm safety at the center.

"Part of this is to help farmers to be more efficient and part of that is to educate them on risk management tools," Wheeler said. "Simple things like that, that maybe some producers are not doing."

In all, the building will cost $3.2 million, according to building permits filed with the city. Construction will be completed in about a year, he said.

The Soybean Association hopes to raise $1 million-$1.5 million for the project from donors like the U.S. Department of Agriculture. Other companies will donate materials used throughout the building.

Elsewhere, soy-based paint as well as carpet and insulated foam made with soy products will be used. Wheeler said the goal is to immerse visitors in the soybean industry so the Soybean Association and Merchandising Council can showcase the ways soybean farmers help the state's economy.

In 2016, the last year for which data was available, Missouri farmers exported more than $2 billion worth of soybeans, making soybeans the state's largest ag export, according to the Missouri Department of Agriculture. Overall, soybean industries have an impact of $8.1 billion on the state, Wheeler said.

"Our goal with the center is to share the impact of soy on everyday life," he said.

After entering the building, visitors will enter a large education center that will house several educational exhibits about soils and soybean production nationwide. The building will also house a conference center with room for 200 people and a space to house a small business incubator for two budding agri-businesses.

A garage door in the back of the education center will allow space for farm equipment that can be used for farm-safety classes by the Soybean Association and other groups.

Other parts of the building will house offices for the Soybean Association, the Merchandising Council and Missouri Farmers Care - a charity that teaches the public about food production, farm life and food security.

"The main goal of this was flexibility because we don't necessarily know what's in the future," Wheeler said.