WATCH: Ceres makes it to the ground 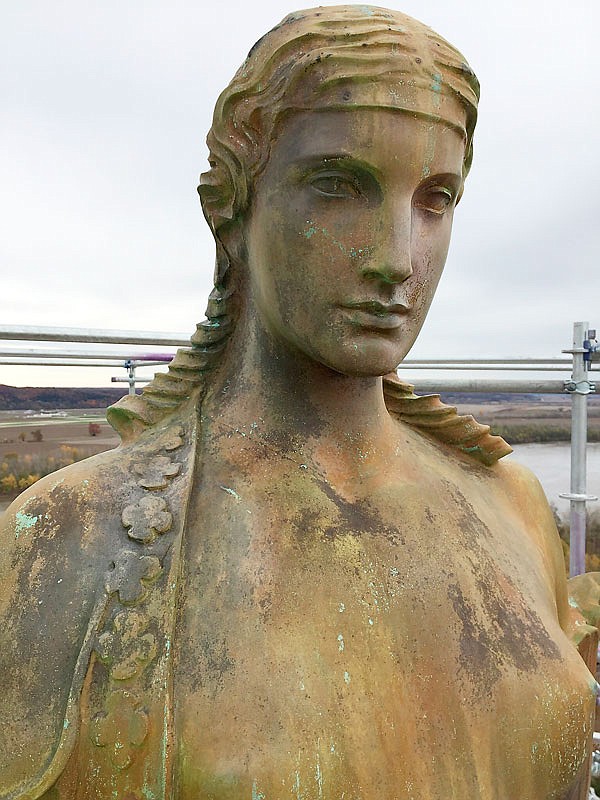 This recent photograph shows the statue of Ceres on top of the Capitol dome which will be removed, weather permitting, Thursday, Nov. 15. It will likely be a daylong process to safely get her to the ground, where she'll be placed on a trailer for closeup viewing for two hours before being wisked away to the Conservation of Sculpture and Objects Studio, Inc. in Forest Park, Illinois

UPDATE: Ceres has made it to the ground. The statue is spending two hours on public display in the media parking lot south of the Missouri Capitol building.

Watch the replay of the lowering via the @Ceres_Mo Twitter page.

State officials are proceeding today with the project to remove Ceres - the 10-foot, 4-inch bronze sculpture of the Roman goddess of agriculture, grain crops, fertility and motherly relationships - from her 94-year perch atop Missouri's Capitol into a year-long "vacation" in Chicago.

Ceres is being taken down this morning for the planned restoration project. The weather hasn't stopped the removal from proceeding, according to Office of Administration announcements.

The Office of Administration is live streaming the descent via the video player embedded below on this page or available on the Facebook Live page. (OA officials say their camera position will change once Ceres is on the ground.)

Once she's down to the ground, Ceres will be placed on a flatbed truck, which will then be parked in the media parking area just north of High Street, between the south Capitol lawn and Missouri Supreme Court building. This will give the public a chance to view the statue up close for about two hours, before she begins her vacation trip to Chicago.