A timeline of events since Greitens' affair was revealed 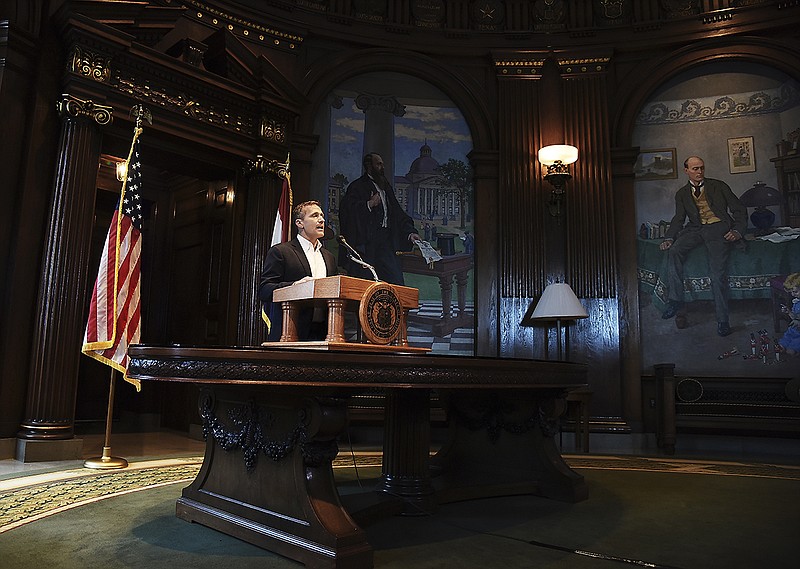 Gov. Eric Greitens reads from a prepared statement as he announces his resignation effective 5 p.m. Friday, June 1, 2018, during a hastily called press conference Tuesday, May 29, 2018, in his Capitol office in Jefferson City, Missouri.

JEFFERSON CITY, Mo. (AP) -- After the revelation in January that Missouri Gov. Eric Greitens had an extramarital affair with his former hairdresser before he took office, the first-term Republican faced a series of investigations and charges. Here's a look at some of the significant moments that led to Greitens' announcement Tuesday that he was resigning:

Jan. 10 -- Hours after Greitens delivers his State of the State speech, St. Louis television station KMOV broadcasts a story featuring a conversation secretly recorded between the governor's former hairdresser and her then-husband in 2015 in which she is heard saying she had a sexual encounter with Greitens. She says he took a photo of her while she was partially nude and threatened to release it if she exposed their relationship. Greitens issues a statement admitting to having an affair but calling it consensual and denying blackmail.

Feb. 22 -- A grand jury in St. Louis indicts the governor on a felony invasion of privacy charge for taking and transmitting the alleged photo. Greitens' attorney says the charge is "baseless and unfounded."

March 1 -- The Republican-led Missouri House forms a bipartisan committee to investigate Greitens. On the same day, Republican Attorney General Josh Hawley opens an inquiry into The Mission Continues, a veterans charity Greitens founded. A key issue is Greitens' use of a charity donor list for his political campaign.

March 14 -- A Democratic consultant files an ethics complaint alleging that Greitens falsely reported how his campaign obtained The Mission Continues' donor list and failed to disclose that it also got the charity's email list.

April 11 -- The House investigatory committee releases a graphic report that details instances in which Greitens' former hairdresser says he slapped, spanked, shoved, grabbed and called her derogatory names during a series of sexual encounters in 2015. The committee finds her testimony credible. Greitens says the report is part of a "witch hunt." The woman's name never has been officially released; it is redacted from the legislative documents and she is identified only by her initials in court filings.

April 17 -- Hawley announces that Greitens may have committed a felony by taking The Mission Continues' donor list and using it for political fundraising without the charity's permission. Hawley turned his evidence over to St. Louis prosecutors.

April 20 -- St. Louis prosecutors charge Greitens with a felony of tampering with computer data for allegedly disclosing The Mission Continues' donor list to his political fundraiser in 2015 without the permission of the St. Louis-based charity. Greitens says the allegations are "ridiculous" and resists calls to resign.

May 2 -- The House investigatory committee releases a second report that indicates that Greitens originally received The Mission Continues' donor list so he could call key supporters of the charity and explain that he was stepping down as CEO in 2014. However, the report says Greitens directed political aides to work off the list to raise money for his campaign -- even though he had signed an agreement to not disclose the charity's confidential donor information. The report also indicates that Greitens' campaign later lied in campaign finance reports about how it got the list.

May 3 -- Republican leaders in the Missouri House and Senate announce they have enough signatures to call a special legislative session to consider disciplinary actions against Greitens that could include impeachment.

May 14 -- Three days into jury selection in Greitens' trial on the felony invasion of privacy charge, prosecutors abruptly drop the charge after the court rules that St. Louis Circuit Attorney Kim Gardner would be questioned and might have to testify at the trial with Greitens' attorneys attacking her handling of the case. Greitens declares an initial victory, but Gardner says she plans to pursue the case, either through a special prosecutor or an appointed assistant.

May 18 -- State lawmakers convene a special session to consider whether to initiate impeachment proceedings against Greitens. The session could last up to 30 days.

May 21 -- A judge appoints a special prosecutor, Jackson County prosecutor Jean Peters Baker, to decide whether to refile the invasion of privacy case against Greitens.