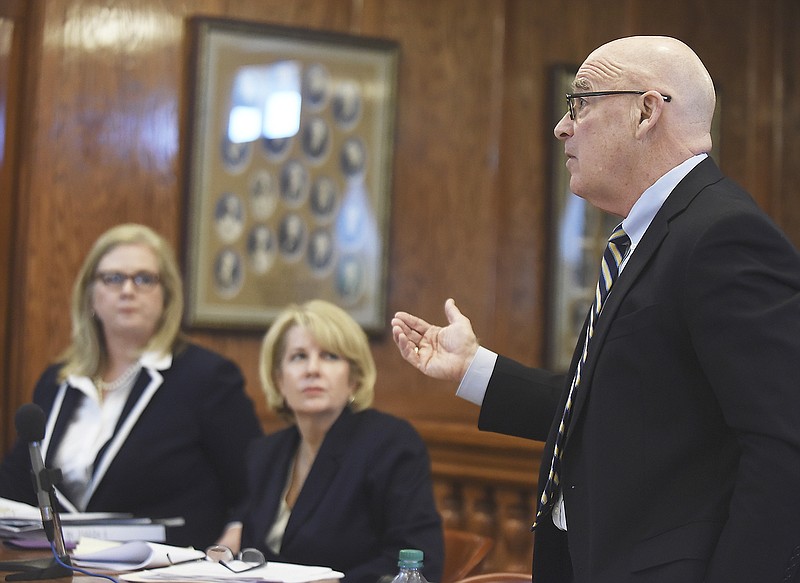 After a nearly hour-long hearing Wednesday morning, Cole County Circuit Judge Jon Beetem is considering how to rule on the Missouri House special committee's request for the court to enforce subpoenas it issued recently to two committees connected with Gov. Eric Greitens.

The House Special Investigative Committee on Oversight - formed three months ago to investigate Greitens' legal situation after a St. Louis grand jury indicted the governor on a felony invasion of privacy charge - has the authority to ask Speaker Todd Richardson to issue subpoenas to get information for, or to call witnesses to, its hearings.

The St. Louis Circuit Attorney dismissed the invasion of privacy charge on May 14 - but the committee's work continues as the early focus of a 30-day special session that began Friday.

It recently issued subpoenas for information from Greitens for Missouri, the governor's campaign committee, and from A New Missouri, a not-for-profit organization formed last year to advocate for the governor and his initiatives.

When the groups didn't respond the way the committee wanted, it filed suit last week asking the court to order the groups to provide the information sought in the subpoenas.

However, Catherine Hanaway, a former House speaker and former U.S. Attorney who now is a private-practice attorney representing the two groups, wants the court to dismiss the case.

Sedalia lawyer Mark Kempton, a former Pettis County prosecutor who's working as one of the committee's special counsel, told Beetem the House has the authority to issue the subpoenas as part of its constitutional power to impeach the governor and other elected officials.

Kempton said the committee had received a number of documents after serving the subpoenas, but still wants the court to order the two groups to provide "communications between Greitens for Missouri on the one hand, and A New Missouri (on) the other hand."

Kempton added: "We (also) request any documentation that relates to coordination between the two entities."

Some of the information sought is "tailored to get information about expenditures by A New Missouri. We're not asking for any donor identification information.

"We're not asking for any bank records.

"We're not asking for any tax records or IRS filings or information."

He said Beetem's role "is limited to enforcing the subpoenas as written to allow this (committee investigation) process to be completed."

However, Hanaway told Beetem: "The novelty and complexity of this case have important bearing well beyond the specific matter here.

"You're being asked to be the first judge to wade into what are very muddy waters with respect to the scope of an investigation, that may lead to a decision by the House to approve articles of impeachment."

She argued that enforcing the House subpoenas would "invade the confidentiality and privacy of donors to A New Missouri," which is a nonprofit organization under Internal Revenue Service regulations that does not have to identify its donors.

She said the House lawsuit had not stated a claim the court could grant, and the lawsuit "failed to establish that the documents are relevant" to the committee's investigation.

"This inability under the (court) rules to go on a pure fishing expedition is particularly true in the context of a specific legislative committee that has been delegated specific, limited powers," Hanaway said.

She argued the committee's assignment is to investigate Greitens, and the governor is not part of A New Missouri, so the committee doesn't have the authority to subpoena that group's records.

Kempton countered Hanaway was trying to put the court in a position similar to being asked to determine that a criminal charge was appropriate "before we're allowed to get the evidence supporting whether or not a crime was committed."

However, Hanaway disagreed, telling Beetem the committee's request was more like taking "random people off the street and asking to see every dollar they've spent to see if their spending habits (show evidence) of a crime."

Beetem gave attorneys for both sides until Friday afternoon to make any other arguments they have, as well as to propose orders for him to use.

He could rule as early as this weekend but, with Monday's holiday, is more likely to issue his ruling next week.

The Legislature's special session must end June 17, so there's a limited amount of time for the committee to look at evidence and hear more witness testimony, then decide whether to recommend that the full House debate impeachment charges.