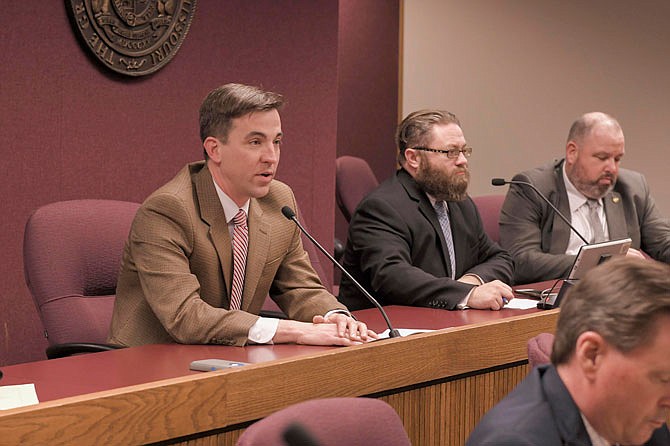 Committee members agreed Tuesday morning to interview Scharf - who was a campaign aide to former House Speaker and U.S. Attorney Catherine Hanaway, when she ran in the 2016 gubernatorial primary against Greitens - about a July 2016 email exchange between him and Michael Hafner by then a former Greitens campaign worker.

"Mr. Scharf is going to be a witness," Chairman Jay Barnes, R-Jefferson City, announced during the committee's first open meeting in more than two months. "We may need to send him a subpoena, as well, before calling him as a witness."

The memo noted the creation of two different "limited liability corporations," or LLCs, in December 2015 that later donated money - $30,000 from one company and $10,000 from the other - to Greitens' gubernatorial campaign.

"Internet searches reveal absolutely no information about ELX83 or White Impala," the memo says. "Literally the only records of their existence are the filings with the Secretary of State and the MEC (Missouri Election Commission) reports of their contributions to the Greitens campaign.

"By all appearances, these two entities were created to channel contributions to the Greitens campaign from an anonymous donor or donors," which is cited as a violation of a state law that "explicitly prohibits campaign contributions made 'in such a manner as to conceal the identity of the actual source of the contribution.'"

The memo also states: "The use of this arrangement to hide donors certainly runs counter to Greitens's repeated attacks on 'corruption' and 'insider political games' in Missouri."

The committee also released a second email exchange, between Hafner and Greitens in December 2014, about the future governor's forming a campaign committee.

"The way I see it the two options you have are forming either a Candidate Committee or an Exploratory Committee," Hefner told Greitens. "Forming a continuing committee (PAC) would make it difficult for you to personally raise funds for it while you are meeting with donors/activists/promoting yourself and candidacy/etc., plus would raise Ethics questions among your potential opponents

"I would think forming an exploratory committee would be best given your situation. We might be able to get away with saying Statewide Office 2016 when forming the committee, but I would suggest putting Governor."

Barnes noted: "We know from public records that no committee was formed until late February 2015."

Other documents the committee released Tuesday included a series of emails in February 2014 - a year before Greitens' campaign committee was created - about scheduling meetings and conversations about the future governor's campaign events, including Republican Party Lincoln Days events.

In one of those, on Feb. 24, 2014, Dave Whitman at The Greitens Group tells Hafner and GOP Consultant David Barklage: "I can't express enough how much we appreciate all you did to set Eric up with some great people this past weekend. I know Eric will want to thank you in person, but I wanted to let you know that it was a complete success. Everyone we (sic) was extremely gracious with their time and couldn't be more helpful.

"Eric and I would like to either sit down or get on the phone to debrief on the early part of this week if possible. Eric leaves for California on Thursday morning. Let us know what works best of (sic) you and we will be flexible. "

Another email between Hafner and Whitman discussed Greitens' attending the March 13, 2014, Lewis & Clark Leadership Forum, a group that "includes some of the biggest politically active donors in the (St. Louis) region. Their only agenda is Pro-Business, pro-growth, pro-jobs candidates and officials in elected office."

Barnes said the release of the new emails mainly provided support for information contained in the committee's May 2 report that looked into Greitens' fundraising activities and his use of donor and email lists from The Mission Continues, the St. Louis-based veterans service charity he helped found in 2007.