Greitens' attorney says no images of woman found on phone 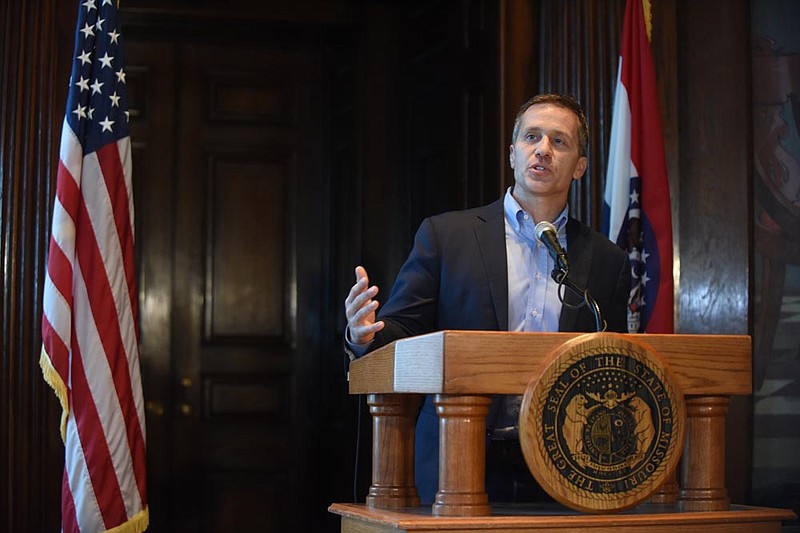 ST. LOUIS (AP) -- A special examiner extracted thousands of images from the cellphone of Missouri Gov. Eric Greitens "and none were found" of a woman whom the governor is charged with photographing while she was at least partially naked, the governor's attorney said Friday.

As jury selection entered its second day, Greitens' attorney Jim Martin urged the judge in the Republican governor's criminal trial to halt the evidence-gathering phase of the investigation that has been going on for four months.

"We believe the time has come to shut this all down," Martin told St. Louis Circuit Judge Rex Burlison, who made no immediate ruling on the request.

Greitens, 44, faces a felony invasion-of-privacy charge for allegedly photographing a woman without her consent while she was at least partially nude in March 2015 and transmitting the image in a way that could be accessed by a computer. The penalty for first-degree invasion of privacy is up to four years in prison.

The woman, whose name has not been released by authorities, has testified that Greitens bound her hands to exercise equipment in the basement of his St. Louis home, blindfolded her and removed her clothes before she saw a flash and heard what sounded like the click of a cellphone camera. She has said Greitens threatened to disseminate the photo if she spoke of their encounter but later told her he had deleted it.

It's not clear whether the cellphone that was examined this week is the same one that Greitens had in 2015.

Greitens has acknowledged having what he says was a consensual affair and has denied criminal wrongdoing, but he has declined to directly answer questions about whether he took the photo. He said the affair started and ended in 2015, as he was preparing to run for governor. Greitens was elected in November 2016.

The trial proceedings began Thursday with potential jurors filling out a questionnaire and, in some cases, answering questions from attorneys. Opening arguments originally were expected to begin Monday, but Burlison acknowledged the process was taking longer than anticipated. He said some people who were supposed to be questioned Friday would instead have to be pushed back until Monday, and that jury selection would continue into Tuesday.

The high stakes in the case were evident during jury selection. One prospective juror who works at the Missouri Department of Transportation was questioned Friday for nearly 30 minutes. The woman said she has read about and heard co-workers discuss the criminal case and other allegations against Greitens, but she said she had formed no opinions.

Defense attorney Scott Rosenblum said to her what he has told many other prospective jurors: "You can't unhear what you heard."

Assistant Circuit Attorney Ronald Sullivan accused Rosenblum of "leading questions" and said Greitens' attorneys are trying to eliminate all jurors except those with absolutely no knowledge of the troubles Greitens faces.

Burlison decided to keep the woman in the pool of potential jurors.

In addition to the invasion-of-privacy case, Greitens faces a separate criminal charge in St. Louis of tampering with computer data for allegedly disclosing the donor list of The Mission Continues to his political fundraiser in 2015 without the permission of the St. Louis-based veterans' charity he founded. No trial date has been set for that case.

The Legislature also is to convene in a month-long special session May 18 to consider whether to try to impeach Greitens. If the House does so, the Senate then would appoint a panel of seven judges to preside over a trial on whether to remove him from office.

The Senate passed a measure Friday that would allow Republican Lt. Gov. Mike Parson to appoint his own replacement -- with the consent of the Senate -- if Parson were to take over for Greitens.

The bill, which still needs a final House vote, seeks to clarify a legally murky situation. The Missouri Constitution states that the lieutenant governor takes over if the governor's office becomes vacant but doesn't directly address what happens to the resulting vacancy in the No. 2 executive post.

When Gov. Mel Carnahan died in a plane crash in October 2000, Lt. Gov. Roger Wilson took over and later appointed then-Sen. Joe Maxwell to serve the final couple months of the lieutenant governor's term. But Maxwell's appointment came after he already had won the November election and thus was due to take office anyway in January 2001. No one challenged his appointment.