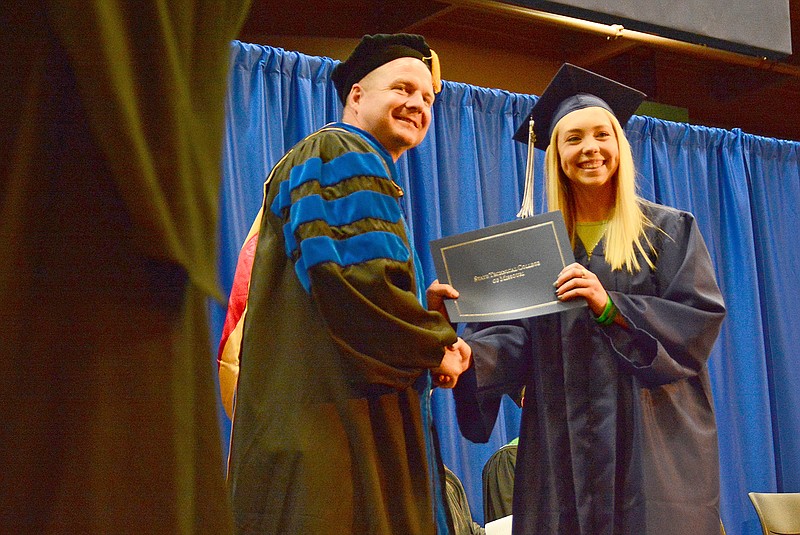 Recent national reports that the U.S. unemployment rate has dropped to 3.9 percent might make some think it could be a tough job market for those graduating from colleges and universities this month.

That's not the case at State Technical College of Missouri in Linn.

On Saturday, three ceremonies saw more than 460 students receive degrees, and school officials said 97 percent of their graduates are placed in a job within six months of graduation.

Shawn Berhorst is lead instructor for networking systems technology and said the problem is not students being able to find a job, it's finding students to come to the school.

"We have more jobs available than kids graduating," he said. "The work is out there for the people with the right skill sets."

Berhorst teaches computer technology, and he said there is a need for people in that industry at all levels.

"As a rule of thumb, if you have computer skills you'll be able to find employment," he said.

Berhorst said approximately 80 percent of the students at State Tech come from a 60- to 70-mile radius of Linn. However, they are starting to see an increase in students coming from the St. Charles and St. Louis areas.

"A lot of the people who employ our graduates have had our students as interns," he said. "These companies also help us find equipment because they want people already trained on equipment they own, so it works out well for everybody."

One of Saturday's graduates was Austin Kleindienst, who already has a job with Scheppers International. He was part of a program that allowed him to go to school and work with a partner company so he could start work in his field of study. For Kleindienst that means working on heavy machinery.

"It could be motorhomes, trucks or trailers, anything like that we'll work on it," he said. "I've always been a mechanic, and I decided that the money is in the diesel field and it interested me so that's what I chose. I'm more of a hands-on learner, so this program really worked for me."

Also graduating was Cory Hentges, who studied auto collision technology. Although there may not be a lot of women in the field, Hentges said she has always enjoyed working with older vehicles. She has a job lined up at Xtreme Body & Paint.

"My dad had a lot of old trucks, so I thought, 'Why not try to learn how to restore them yourself?'" she said. "I already had training in the field because I went to Nichols Career Center in Jefferson City, but I still learned a lot during my time here. It definitely helped me get my job."