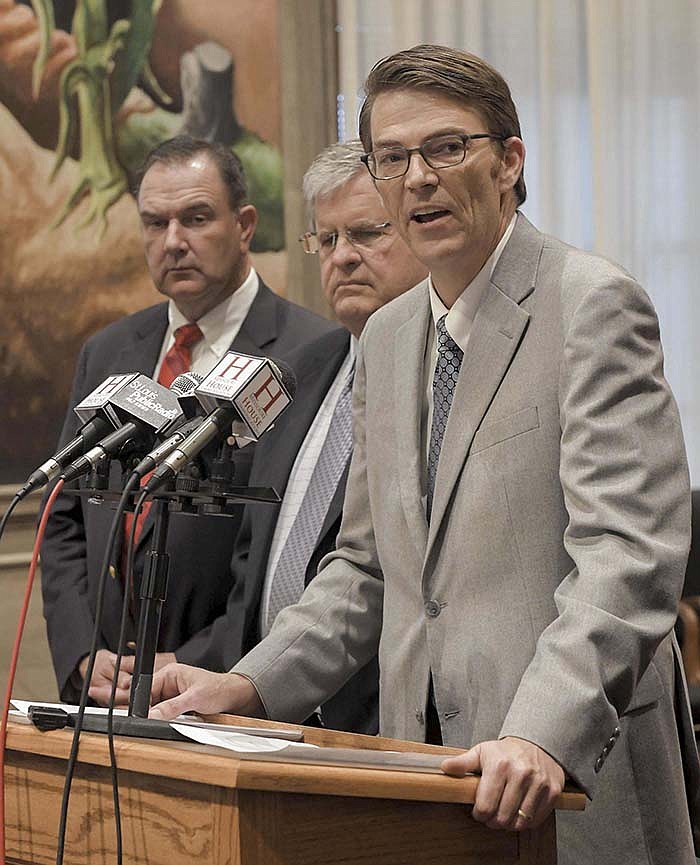 Missouri's Legislature is calling itself into special session to consider the possible impeachment of Gov. Eric Greitens.

The petition delivered to Secretary of State Jay Ashcroft said the "sole purpose" of the special session is to consider the findings and recommendations of the special House committee formed in March to investigate Gov. Eric Greitens' legal situation, including "but not limited to, disciplinary actions against" the governor.

The special session will begin at 6:30 p.m. May 18 - a half-hour after the General Assembly's regular session ends. It must end within 30 days.

Missouri's Constitution requires each house to get signatures from at least three-fourths of its members in order to call themselves into special session - but they got more: 138 signatures in the House (84.66 percent) and 29 in the Senate (85.29 percent).

"This was not a decision made lightly, and certainly not without great deliberation and effort," House Speaker Todd Richardson, R-Poplar Bluff, told reporters at a 10-minute, Thursday evening news conference. "Members signed this petition because they believe in a fair process. They will not be rushed to a conclusion by an artificial deadline.

"But make no mistake about it - today's actions ensure that there will be a conclusion to this process."

Senate President Pro Tem Ron Richard, R-Joplin, said: "As a student of history, as the speaker (does), I recognize the monumental effort and the consequences of this action.

"We do respect the process - I do believe the speaker is right that extra time may be needed to make sure all the facts are found. Things are changing here in the last few weeks, minute by minute."

Richardson said the first part of the special session will allow the House Special Investigative Committee on Oversight, chaired by Rep. Jay Barnes, R-Jefferson City, "the time it needs to conduct a fair, thorough and timely investigation."

Richardson created the special committee at the end of February, after Greitens was indicted by a St. Louis grand jury for felony invasion of privacy, based on allegations that the then-future governor bound and blindfolded his now-former mistress and took a picture of her without her permission, while she was at least partially nude, in a manner that the picture could have been shared with a computer.

The governor has admitted to having an affair and has denied doing anything of a criminal nature.

His trial on that charge is scheduled to begin May 14.

Richardson said: "This path (of a special session) is not the one that I would have chosen for Missourians or my colleagues. I had hoped from the beginning of this process that the committee would find no wrongdoing, so that we could bring this investigation to a close and put all of our attention on the issues that matter most to Missouri families."

But the special committee's first report, issued April 11, found Greitens' former mistress to be "a credible witness" as she told details of her encounters with Greitens in his family's St. Louis home, while his wife was out of town.

And this week, the committee's second report provided details supporting a second criminal charge that has been filed in St. Louis - that Greitens took email and donor lists from The Mission Continues, the St. Louis-based veterans charity he helped found in 2007, without its permission, then used that information to raise around $2 million during the early stages of his campaign for governor.

"Unfortunately," Richardson said, "this is where the facts led. We will not avoid doing what is right, just because it is hard (or) not the path that we had hoped to follow."

Calling the special session, both leaders said, will allow lawmakers to concentrate during the regular session's last two weeks on finishing what Richardson called "one of the most successful sessions in my time here. This means that we will complete our constitutional responsibility of passing a balanced budget while also addressing the issues that are important to Missourians."

Richard said he and Richardson "have met numerous times, talking over the process and how we proceed. The Senate stands ready to do their constitutional duty."

But that may take some time, because under the Missouri Constitution, only the House has the power to approve articles of impeachment - which would, similar to a grand jury indictment in a criminal case, lay out the reasons why the House thinks the governor should be removed from his office.

If a simple majority of the House - 82 representatives - votes for Greitens' impeachment, the state Senate is required to elect "seven eminent jurists" from among the state's active circuit or appeals court judges.

Richard said he and other Senate leaders have consulted with some of the state's retired judges to decide what process should be used to choose the seven.

But, he said, no final plans have been made, and no one has been contacted as a possible member of that panel.

Those seven judges would form a commission to hear the arguments for conviction of the impeachment charges, as well as the governor's defense against those charges.

Five of the seven judges would have to vote for the conviction in order for the governor to be removed from his job and be replaced by the lieutenant governor.

Richardson noted that the "power to discipline elected officials is the most serious of legislative powers."

Greitens has faced repeated calls for his resignation or impeachment following the filing of the two, separate criminal charges in St. Louis.

But, so far, he has proclaimed his innocence and said Missourians "will know the truth" after his first trial later this month.

Robertson, now a private practice attorney, is serving as a special counsel to the committee, which is chaired by state Rep. Jay Barnes, R-Jefferson City.

Hanaway, who more recently served as U.S. attorney for Eastern Missouri during the George W. Bush administration, now is a private practice attorney, and her clients include Greitens' campaign organization.

After the House committee released its latest report Wednesday on the governor's alleged misuse of donor and email lists from The Mission Continues, Hanaway said the new report "does a tremendous disservice to the U.S. and Missouri Constitutions.

"Even a casual observer of our legal process knows that in the United States every American is entitled to their day in court, an opportunity to be heard, and proof beyond a reasonable doubt," Hanaway said.

In his response, Robertson said: "Catherine Hanaway is confused about the law of impeachment. She is fully aware that the House is not convicting anyone. Rather, the House serves to determine whether a public official should be impeached."

If the House votes to impeach Greitens, he added, there will be a trial "where due process is honored and the official impeached is given a fair hearing."

Hanaway complained that Barnes' committee didn't interview anyone from the Greitens campaign.

"If the committee had heard from the campaign," she said, "it would have learned that Mr. (Danny) Laub had possession of the list in early 2015, that the campaign was not formed until then, and that Mr. Laub was the top staff person on the campaign when it began."

The 22-page House report noted Laub was hired Dec. 1, 2014, and was involved in emails in early 2015 with staff from The Mission Continues where the donor list was transferred from the charity.

Hanaway again raised the complaint that the Barnes-led committee "did not allow the campaign to confront its accusers or respond to accusations. If a witness made an allegation, it was accepted as true and republished. If Chairman Barnes were on a quest to find out the truth, he has unfinished business to conduct. He ought to ask the campaign for its version of events before acting as judge and jury in a matter that was settled long ago."

Robertson said the committee will issue subpoenas for committee representatives.

"The committee's report had the desired effect," Robertson said. "It caused people associated with the Greitens team to offer to do what they have so far refused to do when asked - to provide information to the committee."

The committee already has asked St. Louis attorney Al Watkins Jr. - who represents the ex-husband of the woman Greitens had an affair with in 2015 - to appear before it.

"I want to tell the Committee everything that I know about any relevant issues," Watkins wrote. "My cooperation with the Committee, and that of my client, has been unabated since the outset of the Committee's existence."

But, he cautioned, as a lawyer he has "an ethical duty to my clients not to disclose their confidences and privileged information absent a judgment on my part that it is necessary to the representation. I also have a duty not to disclose conversations I have had with clients unless they consent."

While acknowledging the committee likely wants to ask him about both the ex-husband and about his relationship with Missouri Times publisher Scott Faughn, who reportedly gave Watkins $50,000 to represent the ex-husband, Watkins said: "The Missouri Supreme Court's ethical rules require me to decline to discuss information I gained in representing them or my conversations with them."

He also reminded the committee he wasn't present when Greitens allegedly committed acts the governor has denied doing, but that have been mentioned in two criminal charges filed in St. Louis.

Watkins offered to give his testimony to the committee "on the floor of the House for public consumption."

And, while he doesn't have his clients' permission to talk about his conversations with them, Watkins said: "I believe I would have no difficulty garnering the appropriate waiver of privilege and confidentiality from my clients if the Governor and his legal counsel agreed to the same public inquiry protocol."

No date has been announced for Watkins' appearance before the House committee.