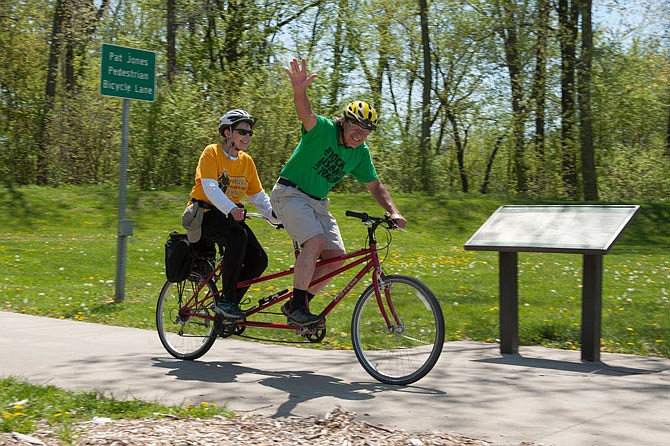 Charles Skornia waves from the front seat of the tandem bicycle he rode with his wife, Charlotte Skornia, on Monday, April 30, 2018, during Bicycle, Pedestrian and Trails Day. Riders, including a few state lawmakers, biked from the Governor's Garden across the pedestrian/bicycle path and onto the Katy Trail. The event aimed to promote the expansion of bicycle- and pedestrian-friendly roadways and nature trails.

Activists, enthusiasts and politicians gathered Monday in the Governor's Garden for Bicycle, Pedestrian and Trails Day at the Missouri Capitol to promote the expansion of bicycle- and pedestrian-friendly roadways and nature trails, among other issues.

The lobby event is a cooperative effort between Missouri Bicycle and Pedestrian Federation, Missouri State Parks, the Missouri Department of Transportation and participating state legislators. About 20 people, including three legislators, set off from the Governor's Garden, rode across a pedestrian pathway on the Missouri River Bridge, and onto the Katy Trail.

Federation Executive Director Brent Hugh said the group lobbied legislators in support of state Sen. Dave Schatz's Senate Bill 1050 to allow for more Road Bond and Special Road and Bridge Fund money to be put toward bicycle- and pedestrian-friendly projects like expanding municipal bike lane networks. Hugh said Jefferson City's bike lane network is a model for other cities that would like to develop a similar system, but there is still progress to be made in connecting the entire city.

"We continue to improve on ways we can be better working with transportation alternatives, like biking and walking," he said. "We've got a ways to go, and we are going to continue to keep working at it."

SB 1050 also would increase restrictions against driving and texting by prohibiting operation of a motor vehicle while using certain devices other than hands-free or voice-operated technology if doing so is proven to have caused the driver to have diverted attention from safely operating a vehicle.

As more people take part in recreational walking and cycling, Hugh said, it becomes more likely for distracted drivers to do severe harm. According to the National Highway Traffic Safety Administration, pedestrian deaths in traffic accidents increased by 12 percent from 2006-15.

Activists also promoted creation of the proposed Rock Island Trail, a 144-mile stretch of abandoned railroad corridor. Hugh said the State Parks department has notified him that it intends to decide whether to accept or deny Ameren's rails-to-trails donation by late December.

"If people don't realize that cycling is something that is really in the communities, they need to get out more and hit the trails and see," federation President Steve Raper said, adding the many communities that have embraced cycling and nature trails have experienced growth. "That dovetails to the Rock Island Trail, and hopefully that comes along pretty soon as well."

Sutherland added a public meeting will be May 19 at the First Missouri State Capitol Historic Site to provide information on the eastern end of the Katy Trail.

Kidd said one of the reasons he participates in the event to promote trails - because for every dollar the state spends on trails, it receives $18 of income.

"It's an economic benefit and boom to the state," he said.