McCaskill defends her record in face of opposition campaign 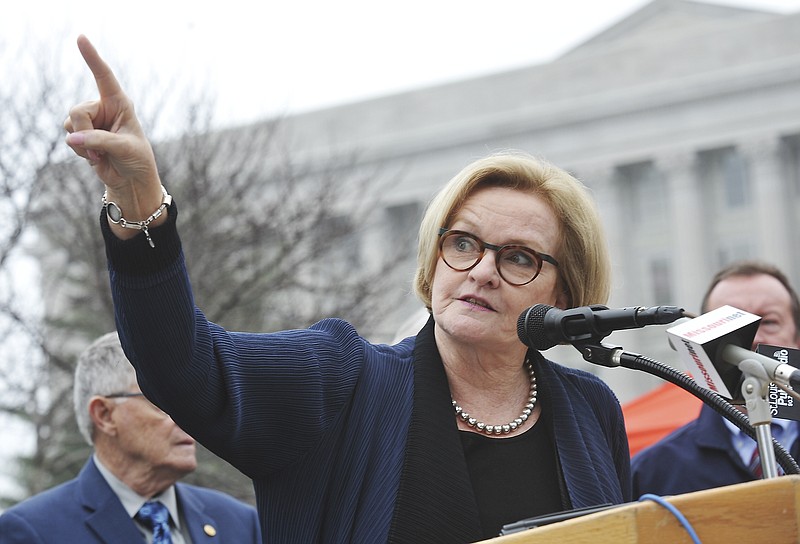 U.S. Sen. Claire McCaskill points to the Missouri Supreme Court building as she refers to her presumed opponent, Attorney General Josh Hawley, in the upcoming race for her congressional seat. She and other elected officials addressed an estimated 2,500 supporters of union labor on hand Wednesday, March 29, 2018, for the rally at the state Capitol to oppose right-to-work legislation.

U.S. Sen. Claire McCaskill told Wednesday's labor "Rally for the Middle Class" that she looks forward to their support in her re-election bid this year.

However, she's aware opponents will target her as they did in her 2006 and 2012 campaigns and argue she can't win a third Senate term.

"They don't know you like I know you," McCaskill said. "They haven't had the honor of having you fight for them. They don't know what it feels like when you have somebody's back - (and) I am so honored by your support."

McCaskill told reporters after Wednesday's rally: "The pharmaceutical industry took a billion-dollar windfall from that bill and gave it to their shareholders, and didn't lower the price of prescription drugs a penny."

She said 87 percent of the tax-cut money benefits about 1 percent of the nation's taxpayers, while "the remaining 13 percent goes to 98 percent of the country. And, maybe, the biggest deal is the fact that, under Republican leadership, we've added $1.8 trillion to our debt in the last six months.

"All I heard from my Republican colleagues, before they took power, was 'deficit, deficit, deficit' - and they've blown this deficit up to places that one couldn't even imagine it could go."

"But then it came down," McCaskill said. "The deficit was cut in half during Obama's years, because that was stimulative spending (that) we needed to get the economy going.

"This is long-term debt. This isn't an annual deficit."

Tax-cut supporters argue most middle-class Americans are benefiting from bonuses and increases in their paychecks.

"I'm glad people have gotten some bonuses - I wish they'd gotten some pay raises instead," McCaskill said. "I'm glad some people have seen a little more money in their checks. That's terrific.

"But it doesn't change the fact that the vast majority of this money is going to wealthy stockholders who are getting buy-back from these giant corporations, and meanwhile, those companies - like health insurance companies and pharmaceutical companies - are going to wipe out any increases people got with higher prices."

The group Missouri Rising Action launched a social media campaign Wednesday, noting McCaskill's appearance at the Jefferson City labor rally, but highlighting "how the 12-year incumbent has grown wealthy while in office with a luxurious D.C. lifestyle that's out-of-touch with average folks, all while promoting liberal policies out-of-step with Missouri voters."

When asked about those comments, McCaskill said: "I worked my way through school as a waitress, through Mizzou undergraduate and law school."

McCaskill served as Missouri's auditor for eight years, from 1999-2007, when she became a U.S. senator.

"When I lived here in Jefferson City, I was a single mom with three kids, living on a reasonable salary," she noted. "I can clip coupons with the best of them. I took my kids on vacation with the money I saved from clipping coupons when I lived here."

The wealth opponents complain about, she said, is because "I married a man who's had great success in business - you'd think Republicans would be celebrating that."