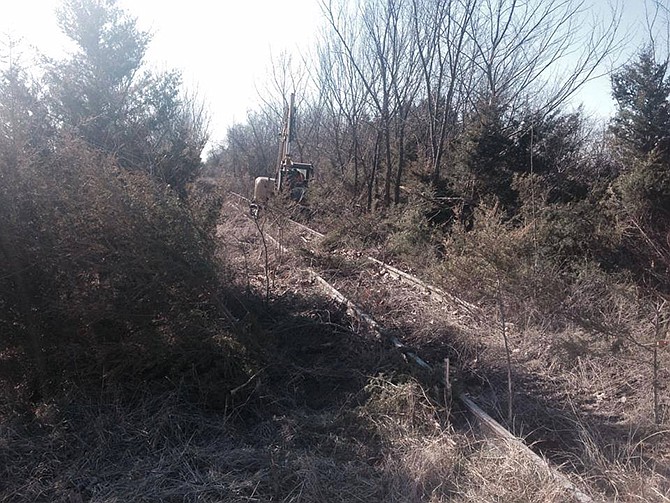 MoRIT is a nonprofit organization founded in 2014 when two separate state trail support groups in the Owensville and Eldon areas joined forces and began gathering other trail proponents. Its ultimate goal is to promote the creation of a world-class, statewide recreation trail loop that will attract tourism to various communities along the route and allow many Missourians better opportunities to experience the outdoors. The rails-to-trails conservancy project would connect the 240-mile Katy Trail with the existing 47.5-mile Rock Island Spur trail, but it hinges on the conversion of the remaining 191-mile Rock Island corridor into a new nature trail, known as the Rock Island Trail, to complete the loop.

Ameren has offered to donate the 144-mile stretch of abandoned railroad corridor to the Missouri Department of Natural Resources' Division of State Parks, but the state has yet to accept the proposal. The proposed RIT would extend from Pleasant Hill to Beaufort. The route includes 39 bridges, three tunnels and 458 culverts, many of which are in need of repair, according to Surface Transportation Board records. The Parks department would be legally responsible for the costs of repairing and converting the corridor. Current department estimates are $60-$80 million for the RIT conversion project. The department has listed budget constraints and maintenance needs in existing parks as reasons it could potentially refuse the donation.

MoRIT President Rick Peth said it will be up to trail supporters to help the Parks Department convert the corridor. "It is our responsibility with communities along the trail to help fund this thing," he said.

The federally operated Surface Transportation Board granted a request by an Ameren subsidiary, Missouri Central Railroad Company, for an extension of the corridor's abandonment exemption, extending the interim trail use negotiating period until Feb. 21, 2019. This allows the Parks Department another year to decide whether to accept Ameren's Rock Island corridor donation.

Warren Wood, Ameren vice president of affairs and communications, said most of Ameren's salvage efforts on the corridor would be completed in May.

The meeting's keynote speaker was Megan Rogers, manager of Co-op Marketing of the Missouri Division of Tourism. She said even small Missouri communities can foster a tourism industry, which will effect every resident. Missouri tourism has a total economic impact of $16.8 billion. "Tourism advertising effects our entire economy across the state," Rogers said.

She recommended communities partner with each other to promote local attractions and purchase advertising. Rogers said there are a lot of community partnerships that can be made on the long RIT route proposal. She recommended targeted marketing and stressed high-quality photography in community promotion.

Rogers said the Division of Tourism is there to help facilitate these partnerships and create promotional websites.

"If you need a marketing plan, a website, a photographer to take pictures of your attractions, those are all things we can help you with a marketing platform," she said.

Mike Sutherland, Missouri State Parks deputy director of administration, said the department is evaluating if it will have the funding to convert the corridor. He is looking into how other states have funded and developed similar rails-to-trails projects. The department is still working with Ameren to obtain right of entry to assess the corridor's condition.

"Within state parks, we have to figure out how we are going to include any addition, whether it's that corridor, other properties or addition to existing state parks," Sutherland said. "Anything we do has to fit within our system and the confines of our funding."

Sutherland said it is good news MoRIT and other trail proponents intend to help fund the corridor conversion, because there are not any funding increases expected through the state.

"That's something we have to deal with and find creative ways to address that," he said. "We don't want to move forward with anything without having a really firm plan in place."

Meghan Largent, an attorney for Arent Fox Legal Counsel, which is representing hundreds of landowners suing the federal government for the fair market value of the corridor land connected to their properties, said she wanted supporters to understand the lawsuits, which are not intended to directly impact the state's decision to accept or deny Ameren's donation.

The railway land was taken decades ago under eminent domain to construct the Rock Island Line railway. Some of the landowners' deeds stipulated the land was to return to the landowner when the railway was abandoned. The National Trails System Act superseded those contract agreements.

Largent said it is a constitutional right for the landowners to receive the fair market value of the land that would have to be turned back over to them if the trail is not installed.

"Any money that they receive from this lawsuit comes out of a federal fund," she said. "Whatever the landowners get out of this lawsuit does not come out of (Rock Island Trail project funds)."

Windsor City Administrator Kim Henderson said her city is growing, including new lodgings and restaurants along the Rock Island route, where the Katy Trail meets the Rock Island Spur.

Leeton Mayor Taylor Elwell said his little town also is developing as a Rock Island Spur trailhead. The town has submitted a grant application to install a campground, which was suggested by MoRIT.

"We are really excited about the opportunity," Elwell said. "If nothing else, we have a corridor that was overgrown with trees completely cleaned up now. We are excited about our spur to be open and look forward to the next 144 miles."

Cilohowee Corner Store owner April Siegfried said cyclists from the Rock Island Spur have benefited her convenience store and restaurant, which she converted from a former bank.

"We realized very quickly that in one day you aren't getting one cyclist at a time, you are getting 10-12," Siegfried said. "I had to put picnic tables outside, because my dining room wasn't big enough."

Siegfried said they are constructing campsites with showers and laundry to meet the needs of cyclists.

"It's very exciting and I don't know what to expect if and when the additional 144 miles go in. That means even more people coming in from the Kansas City area."

Pleasant Hill City Administrator Shawn Henesee said the lack of restaurants and lodgings near the Rock Island Spur has caused the town to have a hard time meeting trail users needs. He said he is advocating for a new campground and other new lodging space.