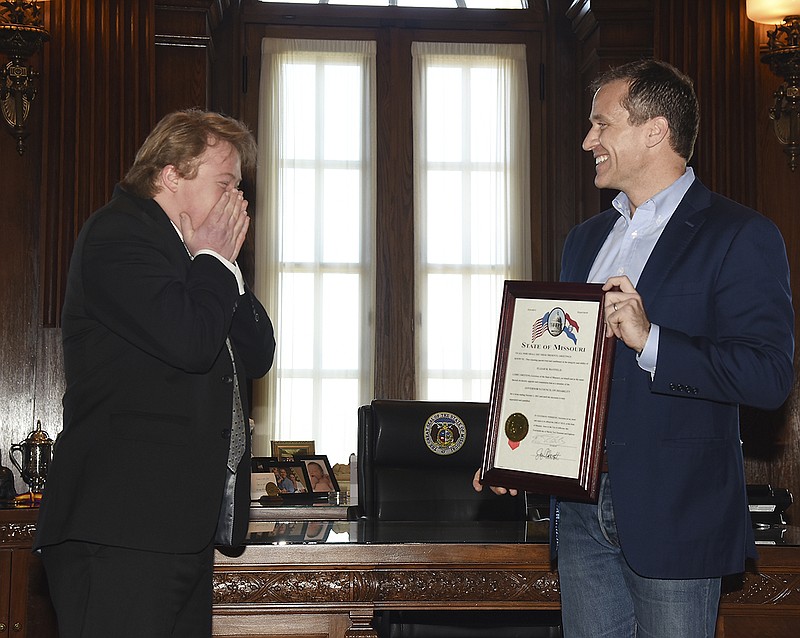 Elijah Mayfield reacts with disbelief as Gov. Eric Greitens announced Wednesday, March 14, 2018, that Mayfield had been named a member of the Governor's Council on Disability. Mayfield works in the Capitol and has shown that Down syndrome doesn't have to prevent someone from leading a normal life.

At 22, it's easy to see why Elijah Mayfield is so well liked in the Missouri State Capitol. He's good-looking, charming and quick.

When he was surprised Wednesday morning by an appointment to the Governor's Council on Disability, he threw his hands over his face, then quickly recovered, hugged Gov. Eric Greitens and accepted the appointment.

In offering the position, Greitens recognized Elijah for his work at the Governor's Office and said Elijah is an important member of his team and continues to be an equally hard worker for the community.

The council makes sure people who have disabilities are fully included in every aspect of life, Greitens said - in business, government, schools and communities.

"There's a lot of important work that the folks on that council do," Greitens said.

He said getting a hug from Elijah every morning is the best part of his day.

"I am honored to be here," Elijah said, and added it was spooky being called to the governor's office in the middle of the morning. "I didn't know - I thought I was going to be fired."

He said members of the staff at the office had been a part of his family for a long time. And he thanked individuals for their support.

Family and friends had difficulty keeping the secret from him, Mayfield said. The Governor's Office had planned to make the presentation about two weeks ago, but Greitens was called away. Then an uncle slipped up and congratulated Elijah, but the young man didn't hear, Todd Mayfield said.

Following the presentation, the father and son worked through the crowded office to reach each other, giving each other a big hug and kiss on the cheek.

"I have great support from my family," Elijah said. "And it's so much fun to be part of (the work in the Capitol)."

The young man said he works "all over the place." He buses tables and greets customers at Paddy Malone's Irish Pub in Jefferson City. He volunteers at St. Mary's Hospital. He and his father have teamed up to represent the United Way of Central Missouri Learning Center at hundreds of events over the years. In December, he was asked to manage the men's basketball team at Lincoln University.

It should have come as no surprise that Elijah recovered quickly and thanked people who support him during the meeting in the Governor's Office, his father said.

He's spoken on Capitol Hill multiple times. In 2016, when he received recognition as the National Down Syndrome Society Champion for Change: Self Advocate of the Year, he was asked to simply say, "Thank you."

He thanked Congressman Blaine Luetkemeyer, who introduced him, the NDSS and his parents. The whole time, Todd Mayfield was standing near trying to get his son's attention and motion for him to cut it short.

As usual, Elijah was professional.

After Wednesday's meeting in the Governor's Office, the father and son quickly made their way up to the House floor, where state Rep. Mike Bernskoetter, R-Jefferson City, introduced him.

Lawmakers understand - it's hard to get legislation done when they aren't at their desks, so things slowed some Wednesday morning. Elijah was allowed to walk among the lawmakers and shake hands with them. Many made their way to a wing of the chamber to congratulate and be photographed with the young man.

And after he left the floor, he found his father and gave him another hug.