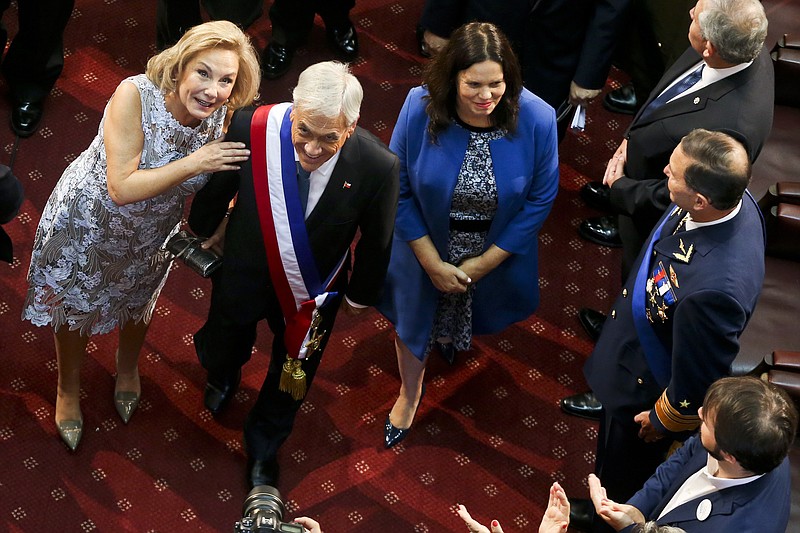 The outgoing leader handed the presidential sash to the president of Congress, who then swore in Pinera — who himself had turned over the office to Bachelet in a similar ceremony four years ago.

Pinera, a billionaire entrepreneur, oversaw growth that averaged 5.3 percent a year during his first term from 2010-14, aided by pro-business policies, rising prices for Chile’s chief export, copper, and a massive rebuilding effort following a magnitude 8.8 earthquake that hit just before he took office.

A slump in copper prices helped sour Bachelet’s second round as president, with the economy — and the president’s popularity — slipping badly in 2014 and 2015. The country’s first female president had been wildly popular when she ended her initial term by handing power to Pinera.

“From day one, Pinera is going to want to show that under him, the wheels of the economy will start to spin again,” said Cristobal Bellolio, a professor of government at the Adolfo Ibanes University.

His first administration was marked by massive street demonstrations to demand reforms to education and other services, as well as by the start of softening copper prices, and he left office with favorability ratings in the 30s.

Pinera, whose first term ended 20 years of left-leaning governments, has said he hopes to work with center-left rivals to achieve his goals, but he also faces a challenge of herding his own sometimes fractious coalition, which includes parties that backed the dictatorship of Gen. Augusto Pinochet from 1973-90.

“We have to see effectively if the right, for the first time in history, has the capacity to work as a team,” political analyst Miguel Zlosilo said.

Among those at the ceremony were the presidents of Argentina, Bolivia, Brazil, Ecuador, Mexico and Peru.