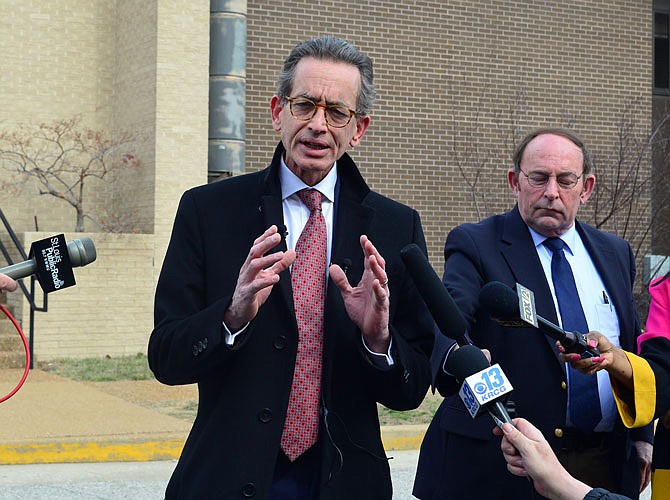 Albert Watkins, a St. Louis attorney representing the former husband of the woman who had an affair with Gov. Eric Greitens, holds a press conference Friday afternoon outside the Jefferson City Police Department.

St. Louis attorney Albert Watkins on Friday accused Gov. Eric Greitens and his "shills or surrogates" of "slut-shaming" the governor's former mistress, and of the "malicious maligning, with racial undertones" of the St. Louis circuit attorney, who is prosecuting the criminal case against Greitens.

In a 27-minute news conference outside Jefferson City's police station - where the House Special Investigative Committee on Oversight was holding a closed hearing for the second time this week - Watkins said Greitens' lawyers and supporters "have been tone-deaf to the reality that victimizing the victim, after the victim has already been victimized, is nothing short of another crime. It may not be violating a statute or it won't constitute a felony."

Greitens' lawyers did not respond Friday evening to a request for comment.

Watkins represents the woman's former husband, and was not speaking for the wife. He confirmed the husband was scheduled to testify to the committee at 3:30 p.m. Friday.

Although the committee's meeting had been scheduled to end at 4 p.m., the panel members didn't leave the police station until 4:45 p.m.

Chairman Jay Barnes, R-Jefferson City, has said the panel's job is only to determine facts - but others, including some lawmakers, have said the committee's findings could lead to the House approving impeachment articles against the governor.

"For whatever reason, there has been an alarmingly increased number of statements and references by shills of the governor who are trying to intimidate - and who are effectuating another act of victimization," Watkins said.

He said one former lawmaker, a Greitens supporter, speculated in a St. Louis radio interview that "this woman is going to have to talk about her other liaisons, her other sexual exploitations."

And that, Watkins said, was "slut-shaming her. We're talking about intimidating a victim and, worse yet, intimidating many other victims who may be subjected to the same public ridicule and shame. And it's that type of action that keeps other victims from coming forward."

A St. Louis grand jury last month indicted Greitens on a charge of invasion of privacy - a Class D felony that, if he's convicted, could result in a prison sentence of up to four years.

The indictment charges Greitens with taking a photograph of the woman in the basement of his west-end St. Louis home in March 2015 - before he had launched his race for governor - while she was at least partly nude, without her knowledge or consent, and when she had an expectation of privacy.

The woman has been identified as Greitens' hairdresser, but hasn't been named.

The indictment also says the picture was taken in such a way it could be uploaded to a computer, which is part of what makes the action a possible crime.

Greitens has admitted to the affair but denied committing any crime.

The Associated Press reported Friday that the governor, who was in New Madrid announcing the start-up of a new aluminum smelter, took no questions from reporters.

In a motion filed with the St. Louis court Thursday, Greitens' attorneys argued there's reason to believe prosecutors enticed reluctant witnesses to testify by offering leniency or warning of possible charges or adverse actions if they didn't testify.

Watkins told reporters outside the Jefferson City police station: "When you're maligning the circuit attorney and saying or asserting, 'There's intimidation going on,' my client stated publicly beforehand that he was going to be continuing his full cooperation with state, local and federal law enforcement authorities and prosecutors.

He also said Greitens' lawyers were maligning Gardner by comparing "the Ivy League pedigree of the recent acquisitions of the defense team for the governor (with) the night school law school background and pedigree of the first African-American circuit attorney (Gardner) in the City of St. Louis."

Watkins said that Greitens, facing the criminal charge, "is entitled to all the rights of any criminally accused defendant (and) the process has to be respected. But our tone-deaf governor and his tone-deaf shills need to understand that there's backlash, if they're going to hurt innocent minors, family members and victims.

"There needs to be a reprisal - and people need to wake up. This is not to be tolerated."