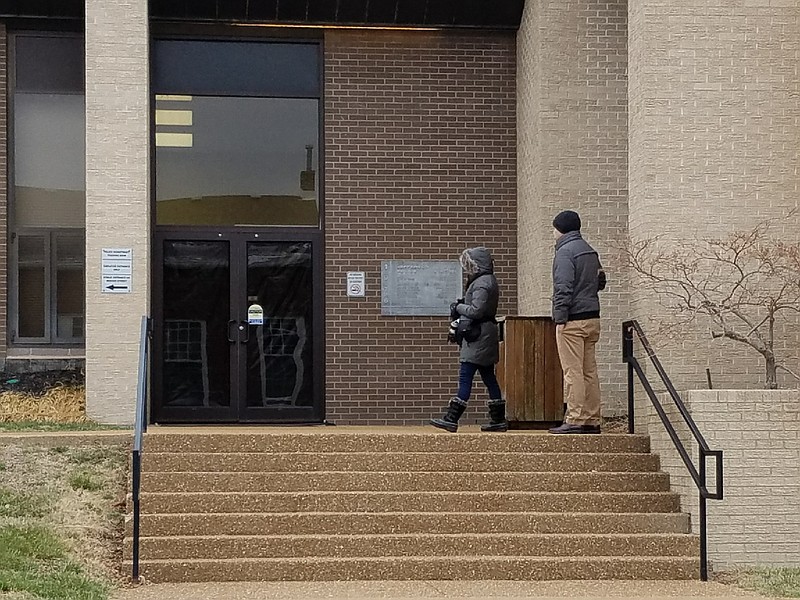 Members of the media wait outside the Jefferson City Police Department the morning of Wednesday, March 7, 2018, as the House Special Investigative Committee on Oversight holds a closed meeting inside, with privacy maintained by blacked-out windows.

The panel met at the Jefferson City Police Department for around four hours, leaving the police station's classroom area about 12:10 p.m.

Barnes, R-Jefferson City, would not say how many witnesses were interviewed during the committee's meeting, reminding reporters there would be a report written when the committee's work is finished.

He told reporters he appreciated their "persistence" in asking questions - but again said it was "a waste of time (and) a waste of my time."

House Speaker Todd Richardson, R-Poplar Bluff, created the committee last week to investigate the situation surrounding a St. Louis grand jury's indictment of Gov. Eric Greitens for felony invasion of privacy involving accusations that he photographed his mistress without her permission, while she was at least partially nude, in March 2015 - before he launched his campaign for governor.

But the House committee's work is on a parallel path - it isn't dependent on the criminal case against the governor but could hear from many of the same witnesses.

"If we have a public hearing," Barnes explained during last week's House debate on a resolution authorizing the committee, "everything a previous witness says would be reported to other potential witnesses - and that would color their testimony, based on what they had heard previous witnesses had said.

"I think the best way to get accurate information is to close those hearings so that other potential witnesses don't know what previous witnesses said."

Jefferson City Police Capt. Doug Shoemaker said in a statement Wednesday morning: "We can confirm we are providing a secure location to accommodate the Missouri House of Representatives for a closed hearing. We appreciate, in advance, that all news media personnel respect the integrity and privacy of those conducting routine business within our building, as well as all ingress/egress routes."

During the committee's meeting at the police station, the outside doors to the classroom area were covered in black plastic, with a flap where people could be seen looking outside at the group of reporters standing alongside East Handley Way (the alley between East McCarty and East Miller streets).

Two reporters who attempted to look through that plastic flap were ordered to move away from the door.

Throughout the morning, reporters from the News Tribune and a number of other print, radio and television news organizations stayed outside the south side of the police station.

During that time, a police cruiser apparently was assigned to watch the reporters while they watched the doors outside the meeting room.

But, Shoemaker said Wednesday afternoon, he could not answer any questions about how the day worked for the police department, how many officers were involved or if the committee had requested future access to the building.

He referred all questions to the House Communications office at the Capitol - which was unable to answer questions about police department operations.

As of Wednesday afternoon, the committee had not scheduled another meeting.

The House resolution - passed last week by a 154-0 vote - gives the committee until early April to conclude its investigation and report to the House.

While some expect the committee's work to lead to impeachment proceedings against Greitens, Barnes has insisted from the beginning that the panel's job is to determine the facts then let the House decide if any other steps need to be taken.

Greitens was charged under provisions of a 1995 law written after a video and tanning bed store operator in Southwest Missouri was accused of taking pictures of customers in the tanning bed area.

The law says the crime occurs when someone "knowingly photographs or films another person, without the person's knowledge and consent, while the person being photographed or filmed is in a state of full or partial nudity and is in a place where one would have a reasonable expectation of privacy."

To be guilty of the crime, the person taking picture also must distribute the photograph to another person, or transmit "the image contained in the photograph or film in a manner that allows access to that image via a computer."

The crime is a Class D felony, with a maximum prison sentence of four years - if there's a conviction.