Built in WWII, Camp Crowder, Missouri was once a booming U.S. Army post 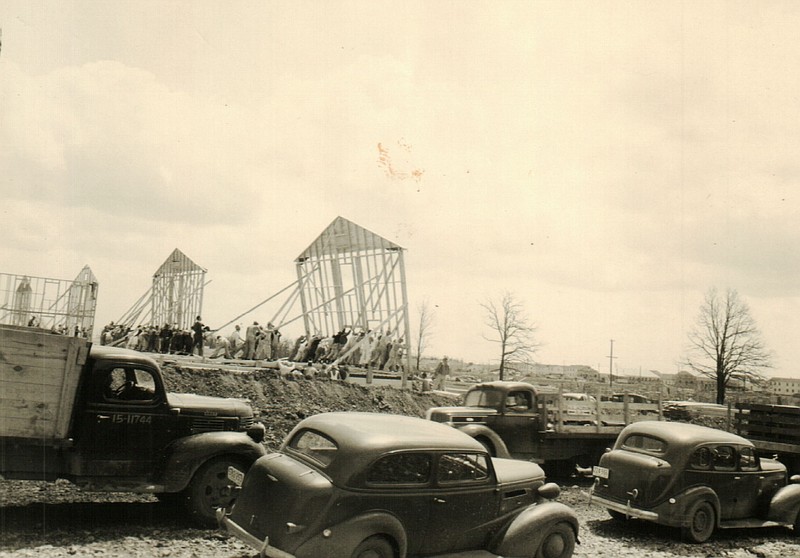 Fort Leonard Wood has for decades been recognized as Missouri’s U.S. Army base. Carved from the wilderness of the rugged Ozarks, groundbreaking for the fort occurred Dec. 3, 1940 — a year prior to the United States’ entry into World War II. The 61,000-acre site was completed in June 1941 with “nearly 1,600 buildings (constructed), comprising five million feet of floor space,” wrote Dr. Larry Roberts in the summer 2008 issue of the Manuever Support Magazine.

At the same point Fort Leonard Wood neared completion, a group of officers from the Seventh Corps Area actively investigated sites in Missouri for another Army base where additional troops could be trained for the country’s anticipated involvement in World War II.

“The desirability of the site depended upon such things as water supply, railroad facilities, topography, location of transcontinental highways and other military needs,” wrote Don Mayes in a souvenir booklet of Camp Crowder’s construction published in 1942. He added, “Neosho was recommended and thus was the beginning of Camp Crowder.”

Burns and McDonnell Engineering Company of Kansas City was awarded the contract to oversee construction of the camp and on May 28, 1941, moved into a building in nearby Neosho to begin their work. For the next few months, the firm was busy with surveying, mapping and drawing up site plans for the proposed camp.

“The War Department has designated a tentative camp site in the Neosho area but actual construction will not be started unless the army is expanded to about 2-1/2 million men,” the Moberly Monitor-Index reported June 20, 1941. The paper also noted no land acquisitions had yet been made for the proposed camp.

Approval for the site was soon granted, the necessary land acquired and the official groundbreaking ceremony held on the site Aug. 30, 1941. The site was officially named Camp Crowder on Sept. 24, 1941, in honor of the late Maj. Gen. Enoch H. Crowder, a Missourian best known for drafting the Selective Service Act of 1917.

Initially, it was anticipated the camp would sprawl across an impressive 66,500 acres; however, the Moberly Monitor-Index reported Nov. 7, 1941, that the War Department disclosed plans to reduce the size of Camp Crowder “by about 11,000 acres on the eastern boundary” due to the proximity of artillery practice areas to homes and school.

The reduction in acreage did not diminish the tempo of construction and the first troops began to arrive at the camp on Dec. 2, 1941. Less than three weeks later, a peak employment of 20,534 was reached at the site. One month later, as the calendar transitioned to Jan. 2, 1942, a total of 81 building were ready for occupancy. By Jan. 29, this number rose to 352 usable buildings.

Dedication ceremonies were held April 12, 1942, and attended by a crowd of thousands. While speaking at the ceremony, Gov. Forrest Donnell recognized not only the role the camp would serve in training soldiers for combat, but also acknowledged those who toiled in its construction.

“Patriotism is not confined to those who wear the uniform,” Donnell said. “I take this opportunity to pay a word of tribute to all those who have engaged in the construction of this camp.”

In February 1942, Camp Crowder became the second replacement training center for the Signal Corps — the branch of the Army that manages communications. In June 1942, the Midwestern Signal Corps School opened and the camp became “(t)he largest concentration of Signal Corps recruits … although it had been in operation less than four months,” as is noted in the book “The Signal Corps: The Test.”

Kansas City native Mort Walker was stationed at Camp Crowder for several weeks during World War II, where he received the inspiration for “Camp Swampy” in what years later became his popular “Beetle Bailey” comic strip. Actor and comedian Dick Van Dyke also spent time at the camp during his wartime service.

In addition to the military training provided at the camp, it housed approximately 2,000 prisoners of war during WWII. When the war came to an end in late summer 1945, operations at the camp began to wind down and the site was eventually closed.

Camp Crowder experienced a mild resurgence during the Korean War and a portion of the property was used by the Air Force in the Cold War to test rocket engines; however, much of the original property has since been deemed excess and sold off to private interests including Crowder College and the Missouri Department of Conservation.

The Missouri National Guard retained 4,358 acres of Camp Crowder for use as a training site. Now a fraction of its WWII size, the camp currently has a full-time staff of 11 employees — a sharp contrast to the 40,000 uniformed men and women it was home to in the height of World War II. Despite these changes, the camp provides a training home to the next generation of soldiers who can still hear echoes of its storied past.

“Personally, I grew up in the area and I at no point in time heard what a significant role that (Camp) Crowder played during World War II,” Capt. Jason Snyder, a member of the Missouri National Guard and base operations supervisor for the site, said.

“The building foundation and some of the walls from an old German school from World War II are still standing on the south side of the camp and have kind of been hidden by time,” he said, adding, “and there is even German writing still visible on some of the walls.”

He concluded, “The German prisoners once held here is only a part of the site’s rich legacy, and it is certainly a privilege to be associated with something that has played such an important role in our state’s military history.”