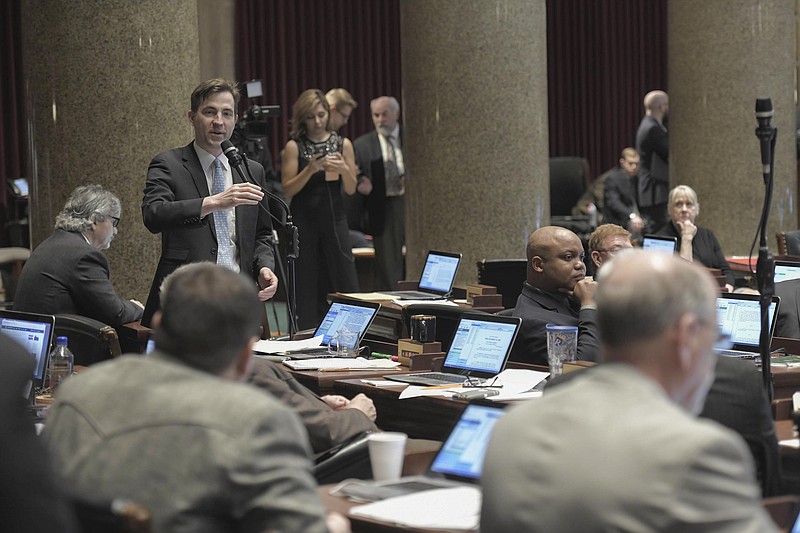 JEFFERSON CITY, Mo. (AP) -- The Missouri House overwhelmingly authorized an investigation into Gov. Eric Greitens on Thursday as a widening group of defense attorneys confirmed several staff members in the governor's office have been served with grand jury subpoenas.

The subpoenas were the latest indication that St. Louis Circuit Attorney Kim Gardner has broadened the scope of her investigation after announcing last week that Greitens had been indicted on a felony count of invasion of privacy stemming from an extramarital affair in 2015.

The St. Louis grand jury was scheduled to meet Thursday and again next week.

Attorney Catherine Hanaway, a former U.S. attorney who ran unsuccessfully against Greitens in the 2016 Republican primary, confirmed Thursday that she was representing a governor's office staff member who had been subpoenaed to appear before the grand jury in the future.

A spokesman for the law firm of Todd Graves, the Missouri Republican Party chairman, confirmed that the Graves Garrett firm also was representing several governor's office employees who had received grand jury subpoenas.

The Greitens staff members could seek to fight the subpoenas to testify.

Hanaway described Gardner, a former Democratic state lawmaker, as "an unpredictable prosecutor in the city of St. Louis (who is) casting a very wide net."

Gardner has defended her ongoing investigation while expressing confidence in being able to prove her case against Greitens.

The indictment alleges that Greitens took a nonconsensual photo of a nude or partially nude woman in March 2015 and transmitted it in a way that could be accessed by a computer.

Greitens has declined to directly answer questions about whether he bound, blindfolded and photographed the woman -- as alleged by the women in a conversation with her husband that he secretly recorded.

The Missouri House investigation is separate from the criminal proceedings but was prompted by the indictment.

A bipartisan seven-member House panel will have the power to compel witnesses to testify through subpoenas that can be issued by House Speaker Todd Richardson. A resolution outlining its procedures was approved without dissent Thursday and allows some testimony to be closed to the public to protect the identity of the witnesses.

"We don't know until we talk to witnesses what the facts are, because there have been so many rumors around here, some absolutely crazy rumors around here, this body doesn't know what's true and what is not," said Republican Rep. Jay Barnes, of Jefferson City, who is chairman of the committee.

House Minority Leader Gail McCann Beatty urged Barnes to conduct as much of the hearings as possible in public.

"The last thing we need to do, given the situation, is to hide behind closed doors," she said

The committee will have 40 days to produce a report, though it can extend its own deadline.

Depending on the report's conclusions, it could be used to initiate impeachment proceedings to try to remove Greitens from office.