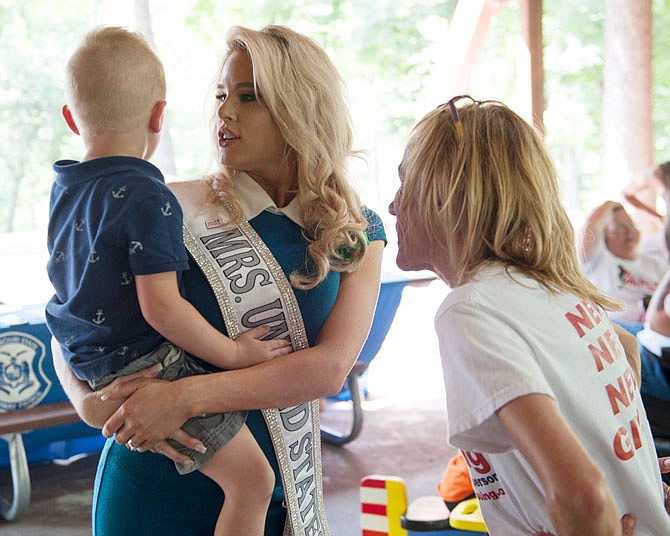 Lauren Ziegler, center, and her son Wesley Ziegler, 3, talk with Judy Courtney, right, at the end of the 11th annual Missouri's Missing and Unidentified Persons Awareness Day Saturday at the Memorial Park Pavilion. Ziegler, Mrs. United States 2017, spoke during the event and Courtney is a board member of Missouri Missing.

More than 11 years ago, Jesse Ross went missing from a school trip in Chicago, and his parents, Donald and Donna, have never stopped looking for him.

Jesse, 19 at the time, was attending a Model United Nations conference with University of Missouri-Kansas City when he disappeared on the final day, Nov. 21, 2006. By the time police were alerted, most students were already on their way home, and the hotel rooms had been cleaned.

The Chicago Police Department hasn't had a lead on the whereabouts of their son since his disappearance, Donald Ross said.

"He had several things - jobs, school, friends - going on, so he had no reason not to want to come home," he said, glancing at his son's missing person flyer on the table. "We feel he just fell into a bad situation."

The Rosses were among about 70 people gathered Saturday under the Memorial Park pavilion to raise awareness of missing and unidentified people as part of the 11th annual Missing and Unidentified Persons Awareness Day. Donald and co-founder of Missouri Missing, Marianne Asher-Chapman, said not only does the event provide a support system for families but it also educates the public.

"I think the common person, the ordinary person, doesn't comprehend how serious something like this is," Donald said. "Maybe they view families like ours as being unique, but we're like everyone else. We were going along our way, living our lives, enjoying our lives and then boom, it hits you. I think it can happen to anyone, anywhere, any time. So, it's really important people know about what's going on and learn as much as they can about what's happening."

Since 1953, the patrol has reported 963 active missing persons cases, 12 of which from Cole County.

The cases show up on the patrol's list only if someone files a missing persons report, Asher-Chapman said, so there are several other missing people they do not know about.

"Every family will say the very worst part is not knowing," she said. "I know my daughter has been killed - I know this - but I can't find her body. I regularly go and take a shovel and dig holes, looking for my daughter. If I could just bring her home, even one single finger nail, if the DNA said it matched mine, then it's her."

The event gives families resources and connections, something Asher-Chapman said was not there when her daughter disappeared. Through the Missouri Missing event, families could speak with representatives from the patrol, Columbia Police Department, and other organizations fighting against human trafficking and child abuse.

Families should never give up looking, Donald said. They should rely on local and national organizations, media outlets, social media and other outlets to raise awareness of their missing loved ones.

Families should not halt the rest of their lives, either, he said. The Rosses recently moved to the Lake of the Ozarks area, work with support organizations, and visit friends and family.

"Do not give up your life because your missing loved one would not want to see that," Donald said. "Whomever might be responsible for what happened to your loved one has brought some tragedy into your life - don't let it compound that by turning your life into a tragedy."

"It's because of each and everyone one of you that I wake up fighting for our children, your children," Ziegler told the crowd.