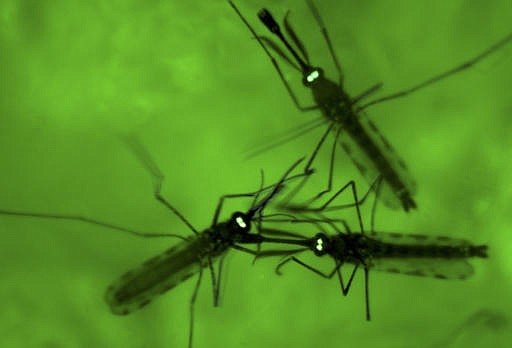 In this Wednesday, June 3, 2009 file photo, adult mosquitoes are seen through a fluorescence microscope at the University of Maryland Biotechnology Institute's Insect Transformation Facility in Rockville, Md.

Most mosquitoes are simply "nuisance" insects, according to the Centers for Disease Control and Prevention, but some spread potentially deadly viruses.

The majority of mosquitoes' bites may leave only a welt and be itchy.

However, some bites can have serious consequences.

First identified in Africa in 1947, Zika remained contained in the African continent for decades. But there was a 2007 outbreak of the disease in Micronesia. A 2015 outbreak that started in Brazil spread to Central America and the United States. By January 2016, the World Health Organization warned that Zika would spread to all the Americas and warned the virus could cause birth defects if pregnant women came into contact with it.

Zika spreads to people primarily through mosquito bites, but a pregnant woman can pass the virus to her fetus, according to the CDC. Infection during pregnancy can cause a birth defect called microcephaly, in which a baby's brain and head do not grow properly during pregnancy, and other birth defects.

In November 2016, WHO announced the end of the Zika outbreak.

St. Louis added its name to a viral infection of the brain after a 1933 outbreak. St. Louis encephalitis, a mosquito-borne illness, affected more than 1,000 people in about five weeks. About 125 people in the United States per year now are infected with the disease. The majority of infections result in mild illness, but the disease can be fatal.

The Cole County Health Department monitors the threat of mosquito-borne illnesses to local residents. At present, the risk is "low," according to the department's website.

The county's Integrated Pest Management Policy requires it monitor data of reported cases of vector-borne illnesses, particularly West Nile Virus from April through September. ("Vectors" are carriers, such as mosquitoes.)

Risk designations are none, low, high and "outbreak in progress." In general terms, low refers to reports of mosquito bites, or history of West Nile Virus in a particular area, or the infection found in birds. (West Nile virus can infect birds like crows and cause them to die. Limited evidence from an Indonesian study shows some domesticated animals can be infected with Zika, but there is no evidence the virus can transmit directly to humans.)

A high risk means West Nile virus has been detected in mosquitoes or birds, or there was a horse case reported, or a human case was confirmed. An outbreak in progress means there is a persistent high infection rate in mosquitoes and bird deaths continue, or there are multiple confirmed human cases.

While the risk of contracting a mosquito-borne disease in Cole County remains low, it's always a good idea to avoid the insects' bites entirely.

A good way to avoid mosquito bites is to use insect repellent. The CDC recommends repellents with the active ingredients DEET, Picardin, IB3535, oil of lemon eucalyptus or 2-undecanone. Wear long-sleeved shirts and pants when outdoors. Mosquito-proof your home by using screens or air conditioning.

Still, it would be nice to know what is out there.

The Zika virus - transmitted by the yellow fever mosquito, which is common in Florida and Texas - made its way into the continental United States about three years ago. The disease was found to be transmitted not only through mosquito bites, but also through sex, said David Claborn, director of the master of public health program at Missouri State University.

"The CDC predicted that through human travel, weather patterns and other conditions, that this species is likely to occur all the way up to Missouri," Claborn said. "There had been yellow fever outbreaks in this region 100 years ago."

There have never been any statewide surveys of mosquitoes to determine what species are in Missouri and how they might pose threats to humans, Claborn said. So a goal was to find out if there were any yellow fever mosquitoes in the state. And he wanted to know if there were any secondary "transmitters" that could move the virus from a reservoir to a host.

A little more than two years ago, Claborn received funding for his surveillance project. He began searching in 36 counties - including Cole County - and several cities for adult mosquitoes and their larvae.

"Our basic method for doing this was to capture adult and larval mosquitoes around wrecking yards," Claborn said. "The wrecking yards are really great places for these things to grow.

"The mosquitoes that transmit this disease (Zika) are connected with artificial containers around human habitats flower pots, tires, food containers and things like that."

The most productive space to find mosquitoes has been in old tires.

To capture the insects, staff set traps that use dry ice as bait. The dry ice (which is frozen carbon dioxide) sublimates, or turns directly from a solid to a gas. Mosquitoes, ticks and other insects are attracted to the carbon dioxide because they think it is the exhale from mammals. When an adult mosquito flies near the trap, a fan sucks it in and captures it. Larvae are collected by simply scooping samples from standing water.

Over the first two years of the survey, Claborn, students and volunteers captured more than 35,000 mosquitoes. They identified 31 species, said Emily Yeap, a public relations specialist with Missouri State University.

Staff found the Asian bush mosquito in Cole County. That mosquito is an invasive species considered relatively new to Missouri. Prior to the survey, there had been reports of it in St. Louis, but it mostly was known as a transmitter of diseases in Asia, Yeap said. Asian bush mosquitoes are capable of transmitting West Nile, St. Louis and other viruses.

The Asian tiger mosquito, the only species found in every county surveyed, is an invasive species that originated in Japan, Yeap said. It is capable of transmitting dengue, chikungunya and Zika viruses.

Zika is on the minds of surveyors, Claborn said.

"We were not testing for the virus," he said. "All we were doing was trying to find out what mosquitoes were out there."

Over the first two years, researchers did not find any yellow fever mosquitoes, Claborn said. But it had identified 40 species.

The Asian tiger mosquito poses some threat of Zika transmission, he said.

"The question is, 'What is the risk for Zika transmission in Missouri?' It is not zero," he said. "But it is probably not as high as in Florida or Texas, where there is a vector that is more efficient."

The survey found 13 mosquito species in Cole County. It found 12 species in Boone County, nine in Miller County and three in Morgan County.

Once the study is done, Claborn hopes to begin a study of ticks in Missouri.

"There are some interesting tick-borne diseases in Missouri," he said. "We think that will be very interesting."