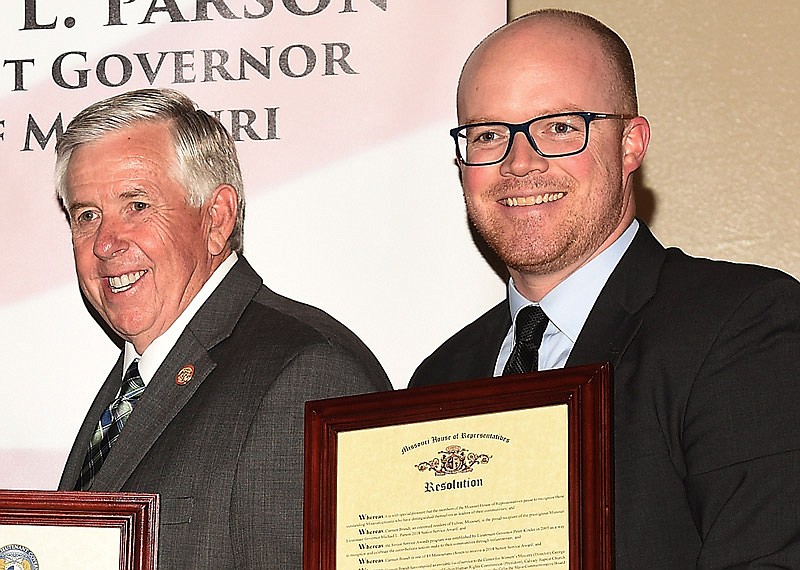 This May 7, 2018 file photo shows Mike Parson, then Missouri's lieutenant governor, and state Rep. Travis Fitzwater, right, handing out proclamations to service award winners during a ceremony at the Missouri Capitol. As governor, Parson last week vetoed a popular STEM and computer science curriculum bill that had been championed by Fitzwater. Parson claimed the bill favored one specific company to be an online curriculum provider.

Missouri Gov. Mike Parson last week vetoed a popular STEM and computer science curriculum bill that had been championed by Rep. Travis Fitzwater, R-Holts Summit. Parson claimed the bill favored one specific company to be an online curriculum provider, and Fitzwater later reportedly said that company had been involved in the process of crafting the bill.

Fitzwater told the News Tribune on Wednesday afternoon he disagreed with the governor's conclusion on the final version of Senate Bill 894, which Parson vetoed Friday. The Kansas City, Missouri-based KCUR public radio station reported later Wednesday that Fitzwater said the out-of-state company in question - Learning Blade - had helped him write the bill.

The News Tribune tried to reach Fitzwater again Wednesday evening through his legislative assistant, but did not immediately receive a response.

KCUR reported Fitzwater said he couldn't speak to whether letting Learning Blade be involved in the crafting of the bill was a conflict of interest.

"The only thing I can really do is speak to the fact that I've just worked really hard to provide opportunities to kids and the best path forward for that was to have a company that's already done some of this kind of help us think through what that looks like in other states where it's been successful," he told KCUR.

A January 2016 story originating in the Fulton Sun cites that Learning Blade's program in Tennessee was at least one of the inspirations for a legislative push by Fitzwater at that time to create a STEM awareness curriculum for Missouri, and Learning Blade has publicly thanked Fitzwater by name for at least two years for his STEM education policy leadership in Missouri, based on several tweets from Learning Blade and Fitzwater.

One section of SB 894 requires the state's Department of Elementary and Secondary Education to select a provider for "an online program to introduce (middle school) students to a wide variety of STEM careers and technology."

"The bill contains a detailed list of criteria the program must meet in order to be selected. The criteria are so specific that they appear to be narrowly tailored to apply to only one company, which violates the Missouri Constitution," Parson wrote in his letter to the Secretary of State that explained his reasoning for his veto of the bill.

"While imposing certain requirements for the program is appropriate, the opportunity to establish an online STEM career curriculum should be open to many providers so that (DESE) has the ability to choose the best option from qualified applicants. Such legislation would receive a welcome review from my administration in the future," Parson added.

Some of the 12 criteria in the bill include that the program be listed as "a recommended STEM resource in ACT's 'Condition of STEM' 2015 report;" have self-paced online curriculum that rewards students in a game format; can be implemented in a variety of classrooms including science, math, English and social studies; "demonstrates how math and language skills appropriate to middle schools are used by STEM careers;" produces reports that teachers and students can analyze; and "has a validation from a national, third-party nonprofit organization that the program increases STEM career awareness and interest."

The specific ACT national report the bill mentions has a list of six STEM resources "suggested by STEM experts." Three of these resources are a leadership conference, a festival and a teacher's association. Of the three recommended resources that provide products or other services, one focuses on higher education and another serves as way for employers to connect with job-seekers.

The only remaining recommended resource in the report, Learning Blade, meets the other aforementioned criteria, including that "Learning Blade has been validated as a supplemental tool for increasing STEM career awareness and interest by BattelleEd," according to Learning Blade's website.

The website for Tennessee-based Learning Blade describes BattelleEd as "an integration network and innovation lab in support of science, technology, engineering and mathematics (STEM) education programs," and as a subsidiary of Battelle Memorial Institute - "the world's largest nonprofit research and development organization."

Fitzwater said he worked with Sen. Jill Schupp, D-Creve Coeur, toward the end of this year's legislative session to try to address the issue raised by the Governor's Office that ultimately led Parson to veto SB 894.

Fitzwater said the bill's language was changed so a prospective online STEM curriculum provider would only have to meet at least seven of the 12 program criteria - a majority, instead of all 12 criteria - to be eligible to be selected by DESE, adding the changes were intended to avoid being too specific to Learning Blade or another provider.

"There are a million software companies in America," he said, adding "we just created standards for what that (curriculum) program should look like."

He said, had the bill passed and DESE had to search for an online curriculum provider, the contract still would have had to be bid out based on a request for qualifications.

"We didn't have anybody that expressed any displeasure with the bill," Libla said, adding it was voted out of the Senate with wide support, and "we didn't have anyone in opposition to the language."

Then-state Sen. Mike Kehoe - who is now Missouri's lieutenant governor after Parson left the position to become governor when Gov. Eric Greitens resigned - wrote in a May column in the News Tribune he was pleased to vote for SB 894, and "Fitzwater bull-dogged this issue from the beginning of session, never missing an opportunity to extol the virtues and necessity of STEM education to senators and his colleagues in the House. Quite frankly, this bill didn't really have any option but to pass thanks to Fitzwater's hard work."

Fitzwater said he's frustrated to see the bill was vetoed because it had been widely supported, and the bill's topic of workforce development has been a priority for Parson.

He said the Governor's Office was precise and probably acted on the side of caution in the final decision on the bill, adding if the problem cited does exist to the extent the office said it did, "a veto was probably in order."

However, he said "we really need to get this computer science going in our schools," as related jobs in the state are going unfilled.

"I also look forward to working with the Legislature next session on the computer science provisions of this bill, which unfortunately will not be enacted this year due to the aforementioned issues," Parson wrote.

Libla said he doesn't plan on trying to resurrect the bill in the veto override session, but he plans on getting it through the Legislature again next session.

"We'll make sure we work closely with the Governor's Office" to make sure the same language issue doesn't arise again, Libla said, adding "(Fitzwater), like I, thought all the language met the criteria" this time.

"I haven't talked to (legislative) leadership about it yet," Fitzwater said of whether he'd consider bringing the bill up in the fall veto override session. He said he doesn't know if that's an option, but doesn't want to rule anything out and will push for a similar bill "next session for sure."