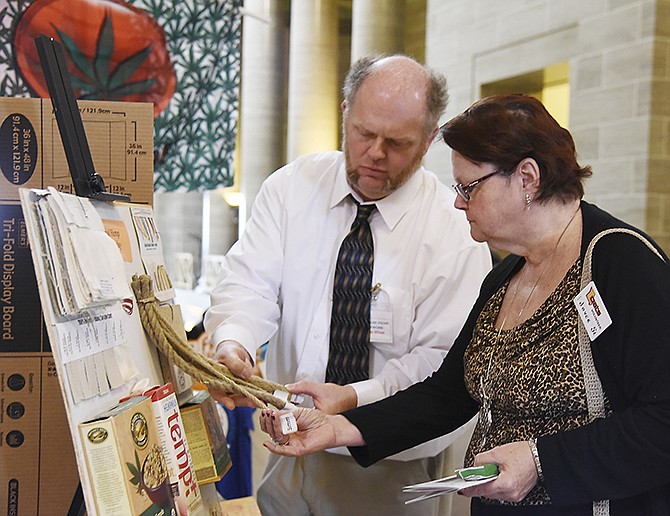 Farmers across Missouri see huge potential from industrial hemp, but questioned the small size of a pilot program being created by the Missouri Department of Agriculture to test ways to grow and market the crop.

The Agriculture Department held a listening session Wednesday in Jefferson City to solicit feedback from farmers as the department tries to draft rules to govern the pilot program. HB 2034 directed the Missouri Department of Agriculture to create a pilot program for farmers who want to grow hemp for industrial uses. The General Assembly passed the bill in May, and former Gov. Eric Greitens signed the bill as he left office June 1.

Some area farmers said they like the idea of being able to grow industrial hemp, but said the bill places burdensome limits that could stifle innovation. The legislation limits the total number of farmable acres under the program to just 2,000 acres statewide. Additionally, through the law, which takes effect Aug. 28, the Agriculture Department must grant farmers who participate in the program permits for a minimum of 10 acres and a maximum of 40 acres.

Chris Beedle owns Canna Ag, a Central Missouri industrial hemp company he founded in 2015. About 30 farmers showed up to the Agriculture Department's first meeting on the topic Wednesday in Jefferson City. With the level of interest high, Beedle said the 10-acre minimum and 40-acre maximum severely limits the amount of people who can participate in the program.

"We cannot have a cap on it," Beedle told the News Tribune.

"That's a pittance," added Derek Bryant, a farmer from Fayette.

"The whole regulation is a bit contradictory in that regard when you have a pilot program that has restrictions like that," he said. "You want to get as many participants as possible."

Hemp fibers can be used in textiles, woods, plastics, papers and other industries. Some people use its oils for health benefits, but the legality of the sales of those oils in Missouri is in dispute under existing law.

Bangert, Bryant, Beedle and other farmers at the event said they see hemp as a crop that can inject life into struggling Midwestern communities.

"There are a lot of smart, hard-working, enterprising people who are chomping at the bit to get something else in the ground," Bryant said. "The potential for industrial hemp seems to be potent."

Federal law defines industrial hemp as a sativa L strain with no more than 0.3 percent THC, the psychoactive compound in marijuana. Missouri's legislation exempts industrial hemp from the definition of marijuana and lists of controlled substances.

Many questions remain about how the program will be implemented. Greenhouse farmers asked whether they will be eligible to participate in the program. Others asked about subsidies and crop insurance programs to protect their investment during the pilot program. Questions also linger about how hemp grown under the program would be processed and turned into other products.

Financing for farmers who participate in the pilot program also remains unknown. Industrial Ag Vice President Boyd Vancil bases his company in Poplar Bluff, but grows industrial hemp in Tennessee. If Missouri legalizes more uses for CBD oil, outside companies could fund some of the ventures, Vancil said, adding other farmers may need to dig into their own pockets to perform other research.

"That's a true risk," he said. "The people that's in those first three years expect to pay it out of your pocket."

Paul Bailey, director of the Missouri Department of Agriculture Plant Industries Division, said the department will likely take six to eight months to finalize rules governing the program. With that timetable though, he acknowledged it may not be possible for farmers to grow hemp during the 2019 growing season.

The Agriculture Department may have other meetings as it crafts the rules, Bailey said.

"Most pieces of legislation are basically an outline," he said. "Rules will have a lot of the meat of the subject in them."