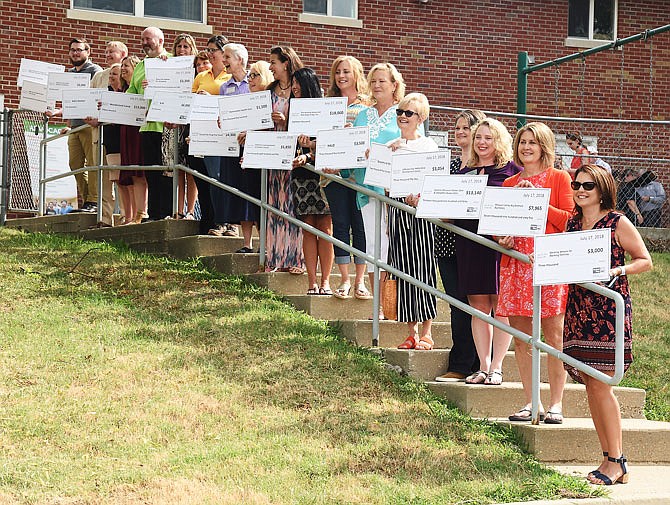 Representatives from the 19 agencies awarded grants from the United Way hold their oversized checks Tuesday.

The United Way of Central Missouri announced distribution of more than $100,000 in Community Support Grants on Tuesday morning.

The organization also announced its fundraising goal and theme during a news conference at Central Missouri Foster Care and Adoption Association, 908 Swifts Highway.

The United Way presented 19 grants - intended to fight for the health, education, financial stability and basic needs of people in Central Missouri - to nine partner agencies and 10 other health and human services organizations, according to President Ann Bax. The grants are in addition to more than $1.36 million the organization has committed to distribute to partner agencies in 2018.

"Let's face it, there are many people in our community facing difficult challenges," Bax said.

United Way partners help people who may struggle to put food on the table, she said. They assist area residents who suffer with mental health challenges. And they help children in foster care hope to find a forever home, she said.

"Thank you for what you do on a daily basis," she told the grant recipients.

In 2017, the organization awarded $80,000 in community support grants to 16 agencies from the seven counties it serves - Cole, Moniteau, Osage, Miller, Morgan, Camden and southern Callaway. Because fundraising has gone so well recently, the United Way has been able to offer grants in addition to its regular support of its partners for each of the past 12 years.

This year's fundraising goal is $2 million. And because the theme is sports, its slogan is "Change the game," said Ryan Freeman, a co-chair of the 2018 campaign.

Changing the game is something United Way works at doing every day, he said.

Missy Dunn, the other co-chair, said more than 8,000 donors contributed to the 2017 campaign, which reached well over its goal of $1.875 million.

Lori Massman, chairwoman of the agency's board of directors, said the organization is committed to putting extra funds back into the communities from which they come. She said the grants will address immediate, critical needs.

Massman then read this year's recipients, beginning with its partner agencies:

Central Missouri Foster Care and Adoption Association received $13,140 to support the purchase of a case-management database, which will provide a centralized web-based platform to track clients' cases and relationships of clients, peers and teams. It will capture demographics, relationships, case notes, documentation, outcome tables and reports, and help with survey and feedback reminders.

Dreams to Reality received $2,500 to help rebrand the organization to help raise awareness of its efforts to help low-income women meet employment goals and build self-confidence. The organization does this by providing appropriate business attire, motivation and support.

Homemaker Health Care got $1,500 to provide a second lift chair for a program called The Caring Chair. This program lends powered recliners that can assist recent cancer surgery patients who are unable to use their arms to stand.

Jefferson City Rape and Abuse Crisis Service received $7,490 to repair a deck deemed unfit for use.

Senior Nutrition Council of Jefferson City and Cole County took away $1,300 for items for a media room at the Senior Center at WestPoint, to help clients with technology and to give them a place to gather and socialize.

Other agencies that received funding are:

Children's Learning Center of Camden County received $5,850 for playground equipment for the outdoor playground space. The items are designed to create a stimulating and learning atmosphere for children with special needs.

El Puente Hispanic Ministry got $1,500 to help cover costs of gas, maintenance and insurance for the van used to take clients to medical treatments.

HALO Home took away $3,500 to buy furniture for the learning center in the HALO Home.

Kids Harbor accepted $5,000 to support a parenting class within the organization, which strives to reduce the traumatization of children and their families after an allegation of child sexual abuse or severe physical abuse has been made.

River City Habitat for Humanity got $3,500 for a second pump-jack scaffold system that will allow the agency to work on two sides of a home at the same time. (The United Way granted funding for the first system as part of its 2017 grant awards.)

The Healing House and New Beginnings received the largest grant of $18,000. The money already was used to match funds previously secured for a handicapped-accessible van to meet the needs of campers attending Wonderland Camp. (The Healing House already had selected the van and was able to take delivery of it Tuesday.)

Working Wheels for Working Families received $3,000 to help remove selected families' transportation barriers. The money will help pay for reconditioning of donated vehicles so they will be road ready and safe for families in need.

Paula Benne, a committee chairwoman and board member for Working Wheels for Working Families, said the money was very much appreciated. Working Wheels helps families overcome transportation issues in the Jefferson City area by providing them with automobiles, Benne said. But they don't just give the cars to the low-income families.

"They have to be working," she said. "They have to put up money to secure the car. They are usually great candidates, but they are behind the eight-ball."

Working Wheels accepts donated automobiles and makes them safe for families to take home. Some may need new tires. Some may need brakes repaired. The organization partners with local businesses, such as car dealerships and Nichols Career Center to get the work done on the cars at reasonable rates.