Parole board chair switches from arresting to releasing offenders 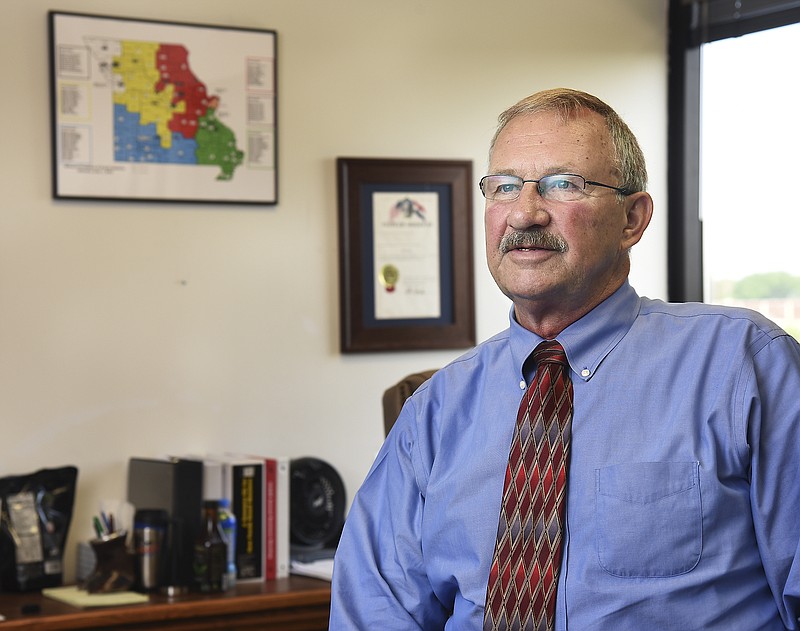 Julie Smith/News Tribune Kenny Jones, Chairman of the Board of Probation and Parole, poses in his Jefferson City office.

The caseload keeping him busy is one of several things Kenny Jones likes about his role as chairman of Missouri's Board of Probation and Parole.

As of right now, the (normally) seven-member board, which falls under the state Department of Corrections, is down to five because of retirements.

"The more people who look at a case, the better," Jones said, "because they all are different."

The board is an essential part of the criminal justice system in Missouri in that it provides for the professional assessment and release of offenders and for their supervision in the community, using appropriate treatment, sanctions, and controls, with the primary consideration being the promotion of public safety, according to the Department of Corrections website. No more than four members of a single political party may serve on it at any given time.

Jones was a trooper with the Missouri Highway Patrol from 1974-85. He was elected Moniteau County sheriff in 1985. He remained sheriff until 2005. Following that, he was elected to the state House of Representatives, representing Moniteau County and part of Cooper County until 2011.

Then-Gov. Jay Nixon appointed him to the board in February 2012.

"We worked pretty closely together when I was in the Legislature to get a raise for deputies," Jones said. "He was attorney general. We knew each other simply by being in the same business."

When Eric Greitens was elected governor, he tapped Jones to lead the board.

Understanding, wisdom and experience have a lot to do with making the decisions. Most of the parole board members "have a lot of life experience."

The wisdom is coming to understand how people have reached the positions in which they end up, Jones said.

More than half the hearings are done through teleconferencing.

Members of the board receive fact sheets on the people coming up for parole. They also receive a report specifically on the charge for which the person is held - including older cases.

"Before someone gets incarcerated, they usually have several chances (for freedom)," Jones said.

If the crime for which they are convicted isn't violent, doesn't involve weapons or doesn't involve sexual assaults, judges will consider alternatives to incarceration, such as "shock incarceration," treatment or probation. People sentenced to shock incarceration receive a 120-day sentence. After 90 days, the judge receives a report on the offender's behavior. The judge can then decide to allow the offender to be released after the 120th day and be placed on probation.

Another 65,000 people are under criminal justice supervision through either probation or parole.

There are so many statistics that can be overwhelming, Jones said.

"It's risk versus public safety," he said. "How much risk are you taking in releasing this guy? And is the public going to be affected by him?"

Board members use multiple evidence-based tools to determine risk.

The board is moving to a risk-assessment tool the University of Cincinnati developed that is proving efficient and effective.

The Ohio Risk Assessment System was created using in-depth interviews of more than 1,800 offenders at different stages in the criminal justice system, including pretrial, community supervision, prison intake and community reentry. It helps to identify risk levels and direct officials handling people in the criminal justice system toward areas that need improvement to avoid recidivism. It will provide recommendations for levels of community supervision and suggest programs and other options for the offenders. It's based on seven or eight criteria that will help determine whether a person is a good risk for release, Jones said.

The board will be using the system within the next year.

In this job, a person feels like they are helping the state of Missouri.

It's a good feeling when you find the best part of someone," he said, "and see how they have been influenced - positively - by their time with us."

If they've made good choices in the institution, such as continuing their education, receiving job training or gaining experience while incarcerated, those efforts give board members a good way to look at their motivation, Jones said.

But research shows treatment on the outside not only will reduce the population of prisons but will allow people to be employed and stay with their families and support groups, he said.

"They can be working and doing treatment," Jones said. "This is a new way of seeing how to correct criminal behavior."