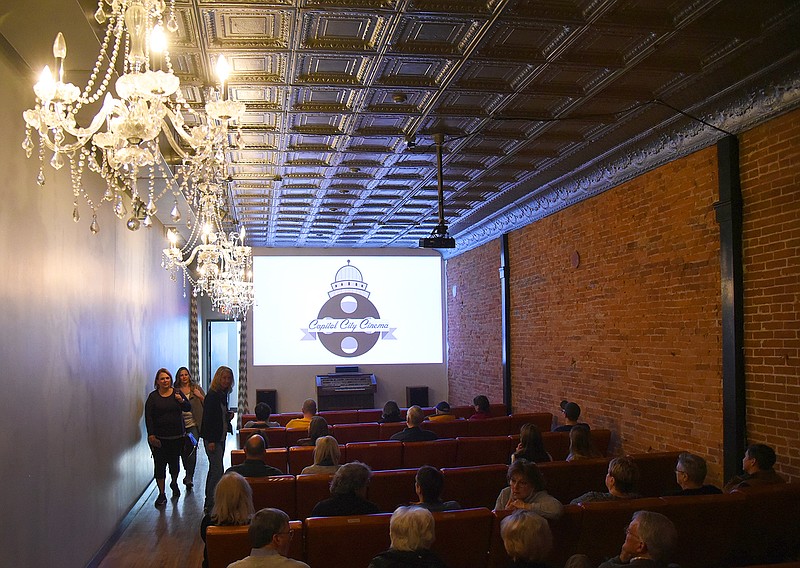 People make their way into the auditorium to pick seats before the showing of the film "Lady Bird" at Capitol City Cinema on Saturday, Jan. 27, 2018.

Both longtime patrons of the Jefferson City nonprofit, independent theater and newcomers eager to see the two-time Golden Globe-winning film pre-ordered tickets and flocked to see the movie, which sold out its opening night Jan. 12 and continued to trend throughout the first weekend it screened.

The Jefferson City theater has used DVD and Blu-Ray technology to screen its films since the nonprofit organization's inception in 2013.

"It worked, but it was a very inefficient and time-consuming system," said Dale Vaughan, project manager and board member for Capitol City Cinema. "All films were mailed to us on a DVD, which took days to arrive. Once it arrived, every film had to be played prior to public showing so we could be sure it worked and there were no glitches."

Capitol City Cinema officially launched a fundraising campaign last summer to go completely digital, a technological movement within the film industry that is forcing many theaters to upgrade their equipment. The cinema board and its founder/executive director, Jami Wade, were ecstatic about the community support, including more than $3,000 contributed to its GoFundMe "go digital" campaign, more than $6,000 during a Giving Tuesday fundraiser Nov. 28 and three business sponsorships from Hawthorn Bank, Socket and Millard Funeral Chapels.

Proludio, a digital film delivery service company in Oregon, created an alternative to costly exhibition standards set by the Digital Cinema Initiative and allows theaters to screen first-run independent films without purchasing the expensive equipment the initiative requires. Vaughan, who helped install the Proludio system the cinema is leasing, said it consists of a software program along with multiple hardware items.

"It's a big black box, which is basically the computer, along with a touchscreen monitor, internet modem and audio controls," he said, noting Socket donated internet service in exchange for promoting their business through the cinema's various electronic resources, events and community outreach programs.

Kyle Loethen, Capitol City Cinema board member and past board president, said movies now are downloaded directly to the Proludio system and queued to screen after being tested.

"We have saved money not having to ship the flash drives and DVDs. It takes two to three hours to download the film and trailers. We screen it and test it, then we are up and running," Loethen said.

Capitol City Cinema was able to keep its surround sound system and Blu-Ray player, allowing local system operators to go between Blu-Ray and digital with the ease of a switch. Vaughan said the Proludio team has been helpful in walking users through how to operate the system and in getting the latest movies they would like to screen.

The digital conversion has allowed the cinema not only to screen sought-after new movies like "The Disaster Artist," "I, Tonya" "Call Me By Your Name" and "The Florida Project" during the awards season, but also to add more showtimes to their schedule, with two showings per movie during the weekend. "Lady Bird" even had additional showings during its final run last week due to sold-out screenings.

"We still have our training wheels on and are learning and molding the process, seeing what works best," Loethen said.

He noted the cinema might start showing different movies on the same day this spring.

"Providing more showtimes gives more people opportunities. Showing at roughly 6 p.m. and 8:30 p.m. (depending on the length of the film), people could grab an early dinner or watch a movie and grab a late dinner," Loethen said.

Going digital has allowed the cinema to make other improvements - installing of a new Canon Ultra HD 4K rear projector that suspends from the ceiling, a digital equipment room and bathroom, with the help of contractor Shannon Wade.

"We also used a Ultra HD 4K Resolution White Screen Paint (on the wall used for the projected screen). It's a one-step product for commercial projector screens and 50 percent brighter than a chalk-white primered wall. It has an extremely wide viewing angle with accurate color rendering and good contrast," Vaughan said. "It delivers that 'pop' wow factor that we all look for in our screen images."

Additional improvements include a new cash register, new drink cooler, a box office phone and voicemail system, a bigger popcorn machine, a refurbished butter warmer from the old Truman 4 Theatres, and additional employees to run the cinema during screenings.

As newer movies screen more often at Capitol City Cinema, its board hopes to secure more corporate sponsors to continue to enhance and expand its programming.

"Aside from newer, better movies and access to those movies, we have better capability for pre-roll and trailers," Loethen said.

"Going digital with Proludio has been a game-changer. We are now able to get the popular indie films that everyone wants to see. The old days of empty theater seats is in the past. Proludio is allowing us to give the people want they want. In return the community has embraced the cinema and showed up," Vaughan said. "We are educating, inspiring, entertaining and connecting our community through innovative film programming and film-related events. That is our mission."