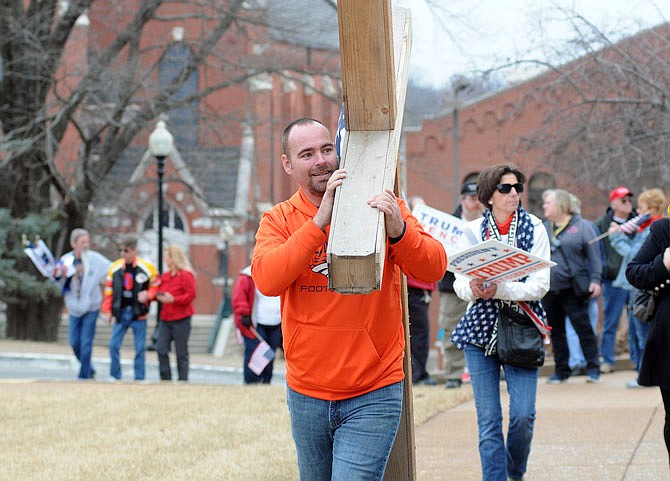 Jeremia Foote drags a large cross to the Capitol during a Saturday rally celebrating the first anniversary of President Donald Trump's inauguration. The event was coordinated by the Missouri Republican Leadership Initiative.

Editor's Note: Mid-Missourians on the other side of this issue also rallied Saturday. Read that coverage here.

JEFFERSON CITY, Mo. - One year after Donald Trump took the oath as the United States' 45th president, at least 250 Missourians rallied at the Capitol to celebrate the anniversary.

"This is a hard-earned day," master of ceremonies Jamie Allman, a St. Louis talk show host, told the crowd gathered inside the Rotunda. "We have had so much progress just in a short period of time.

"It's gotten to the point where these people in the media and beyond are trying to throw anything they can at the wall - and it's just not sticking!"

He was the first of several speakers pointing to deregulation, tax reform and "the money in the bank" as successes of the Trump administration's first year.

Lt. Gov. Mike Parson, a former sheriff and a farmer, noted Trump's use of executive powers showed his "dedication to smaller government from day one," by eliminating "needless bureaucracy and to reduce the regulation burdens in this country."

Parson pointed to the administration's focus on reducing or eliminating EPA rules and regulations "which had once held agriculture in a stranglehold, with more than 30,000 pages of regulations for farmers across our state."

U.S. Rep. Blaine Luetkemeyer, R-St. Elizabeth, had been scheduled to participate in Saturday's rally, but still was in Washington, D.C., because of the ongoing debates over the federal budget and this weekend's government shutdown.

Parson said: "I cannot understand why they cannot pass a budget for the United States of America - one of their fundamental duties under the Constitution.

"And it's not because of the President of the United States - he's been very vocal on what he's trying to do."

None of the speakers noted that McCaskill, Missouri's senior senator, was one of five Democrats who voted "yes" Friday night to keep the government open through Feb. 16.

However, that vote failed to pass.

Attorney General Josh Hawley, who's announced a campaign to replace McCaskill in this year's general elections, told the crowd: "Missouri has a chance in 2018 to change the balance in the United States Congress and the United States Senate."

Hawley said the 2016 elections showed a political revolution that will continue in future elections - that "the American people stood up to the so-called 'ruling class' in this country and said, 'You don't speak for me!'"

Pat Thomas, of Jefferson City - a legislative assistant and party activist who serves on both the Cole County and Missouri State GOP committees - said the rally was "important to show support for the president who was elected by the people."

When reminded some argue Trump lost the popular vote by nearly 3 million ballots, and became president because the U.S. Constitution created the electoral college, Thomas responded: "There were very wise founders in this country who established the system to make sure that all populations - even though they weren't going to live evenly - would evenly get to elect the president of the country."

Valerie Reilly traveled from Harrisonville, south of Kansas City, to celebrate Trump's first year and "let him know that we're still standing behind him."

She rejects polls that show the president with historically low approval ratings.

"Polls are not true," she said. "When I went and I was going to be picked as a juror, I found that 95 percent in the room don't even watch TV and don't get news anywhere. They just live their life.

"The people that they poll get tired of people calling them to get polled, and they don't even give them real information."

Missouri Secretary of State Jay Ashcroft said part of Saturday's celebration focused on "the hard-working people of Missouri and the United States who said, 'We've had enough. We're taking our country back.'"

He applauded the work of a number of young people attending and helping organize Saturday's rally, "doing great work not only for the president, but for candidates and individuals across this state."

Ashcroft pointed to Trump being the first president to participate in Friday's annual March for Life that observes the anniversary of the 1973 U.S. Supreme Court decision legalizing abortions.

"We believe in life for everyone from conception to natural death," Ashcroft said, "and it's wonderful to have a president that fights for that!"

Pro-life activist Kathy Forck, of New Bloomfield, said Trump's support "for life is the main thing. He is for life, and the things that he is doing, appointing Neil Gorsuch to the Supreme Court is fabulous."

Sherry Kuttenkuler, of Tipton - who's a legislative assistant and was the 4th Congressional District elector after the 2016 elections - also appreciated Trump's pro-life actions.

His taking part in the March For Life was huge, she said, adding "extending to the unborn the same due process rights that the rest of us enjoy" should be a national goal.

Kuttenkuler also said there should be more focus "on some of the other positive things that Trump has accomplished since he's been in office, such as unplugging us from the Waters of the U.S., (and) looking at more specifically on a lot of the EPA regulations. I think many people - especially in the farming community and the ag community in Missouri - need to understand that all the things that he's done that will be very far-reaching and will affect their daily lives."

Martin and Sherry Cates, of Washington, Missouri, came to the rally because, "We're 100 percent behind Mr. Trump for president.

"He's done the most for our country than any president we've ever had."

He reminded the rally that, before the November 2016 election, many conservatives were talking about "the U.S. Supreme Court and making sure that we had justices who understood the role of government - that we're supposed to have a limited federal government (and) that the states came together to create the national government."

Appointing Judge Neil Gorsuch to the Supreme Court was "setting the stage for right-thinking on the highest court in the land for a long time - that was a huge accomplishment that we can't forget," Schmitt, who is an attorney, said.

Hawley also praised Trump's choice of Gorsuch, a "constitutional conservative," for the U.S. Supreme Court. "He will shape the law of this country for 40 or 50 years to come, and for that, we have to thank President Donald Trump."

Schmitt added: "And then we get into more economic opportunity for more people, and you look and see what's happening," including the creation of 1.5 million new jobs in 2017.

He said the "Obama economy had left them behind."

Saturday's rally began outside the Capitol, with motorcycles leading a one-lap circle around the building before the participants moved inside.

"There is no one other to thank than President Donald J. Trump for uniting this great country once again."

Have a question about this article? Have something to add? Send an email to reporter Bob Watson at [email protected].