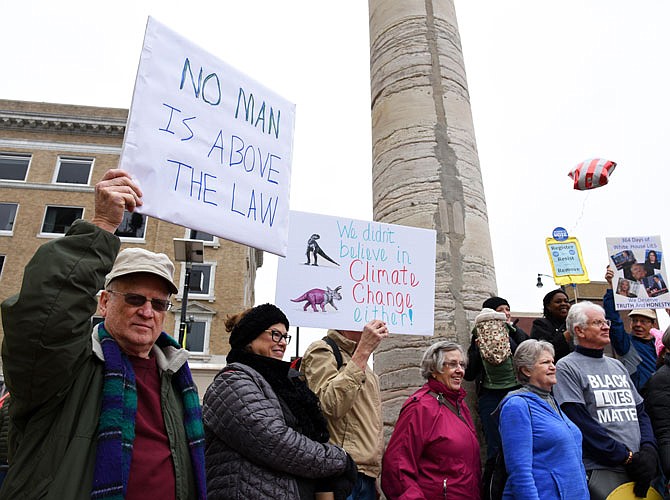 Tony Smith, a member of Jefferson City Area Indivisible, holds up a sign Saturday during the Columbia Solidarity March and Rally outside of the Columbia Municipal Court.

Editor's Note: Mid-Missourians on the other side of this issue also rallied Saturday. Read that coverage here.

COLUMBIA, Mo. - A mass of people that included many Jefferson City residents and Mid-Missourians took to the streets Saturday across the United States again, a year after last January's Women's March and the inauguration of a presidency many Americans see as a threat to themselves and even the planet.

President Donald Trump spoke a year ago at his inauguration about promises to restore order to what he and supporters saw as a nation out of control.

Trump spoke about a status quo of politics and business that had drained the United States of wealth, productivity and wellbeing - "American carnage" in his terms, due to job losses, poverty, inadequate educations, crime, drugs and global profits not reaching enough American families.

"The forgotten men and women of our country will be forgotten no longer. Everyone is listening to you now. You came by the tens of millions to become part of a historic movement the likes of which the world has never seen before. At the center of this movement is a crucial conviction: That a nation exists to serve its citizens," Trump said at the time.

A year later, as with the Women's March before it, many people - numbering in at least the hundreds of thousands nationally and about 1,650 in Columbia this time around - took to the streets to make sure they and others were not forgotten, to demand and inhabit a literal space for their voices to be heard.

These were not Trump supporters, though, but people who felt not just forgotten but threatened by Trump, his administration's policies and the direction of the country under him.

Though the defeat of Trump-endorsed U.S. Senate candidate Roy Moore in Alabama last month gave her hope, Ann Bickel, of Jefferson City, said, "I think we're going to go through a lot before three years is up."

Among Bickel - who marched with Jefferson City Area Indivisible - and fellow protesters were children pushed in strollers or pulled in wagons. "I love seeing the new mothers bringing their children out," she said.

In part because she was a young mother in the 1960s, she said she didn't march in that era of civil rights and anti-war protests. Her friends did, though, and she said she always regretted not joining them.

Leigh Klein, of Jefferson City and also with JCAI, said the direction of the country under Trump isn't going toward the kind of world she wants her grandchildren to grow up in.

Klein felt particularly motivated to voice her dissent because of her desire for protecting abortion rights and "Dreamers," and the administration's lack of concern for climate change and scientific research.

Dreamers are undocumented immigrants brought to the United States as children. Of the 3.6 million Dreamers estimated to be in the U.S. by the Migration Policy Institute, according to USA Today, about 800,000 are young people who had been protected from deportation by the President Barack Obama-era Deferred Action for Childhood Arrivals program.

Trump cancelled the DACA program and promised substantive immigration policy reform in its place, but this ultimately led to a partisan impasse in Congress over the issue that led to the current federal government shutdown.

Trump also pulled the United States from the Paris climate accords - an international agreement to address climate change - and removed climate change from a list of global threats to U.S. national security.

Klein still has faith in American institutions to eventually take the country back in the direction she hopes it goes. "There is wonderful potential for leadership," she said of government, nonprofits and corporations.

Alyce Turner said she trusts in government, but not necessarily in the electoral process or that money won't influence politics. Turner lives in Columbia but said she has worked in Jefferson City for almost two decades.

"I believe in participatory democracy," she said, adding the popular vote ought to decide elections.

Trump won the electoral vote in the 2016 presidential election over his principal opponent, Democratic candidate Hillary Clinton, but he lost the popular vote to Clinton by a little under 3 million votes, according to the Federal Election Commission.

"Show me what democracy looks like" was the chant that started the march Saturday.

"I'm certainly going to talk to candidates who will be running for (Republican Congressman) Blaine Luetkemeyer's seat," Pam Rich said.

Rich cited climate change and health care as other concerns.

The News Tribune spoke with several Jefferson Citians including Rich in the days ahead of the rally and march who said they planned to attend, too.

"What unites us is that we want the ability to be able to live a life, where we have health care, where our families are taken care of, where we are able to live in better truth, dignity and have a better unity among the people, and peace," Patsy Johnson said. Johnson spoke of state and federal policies she feels create economic inequality and strip others of bargaining power.

Barbara Ross said a lot of people in the opposition to Trump movement are thinking about the future after him.

"Any governmental system will require a kind of vigilance that you can never let down on," Ross said, adding "there are a million, billion ways that injustice runs its way into society, so you have to be on guard for all these things." She was concerned about the nexus of racism and poverty along with ecological devastation - particularly through nuclear war.

"I think we got too comfortable as a nation and expected things to work out on their own," Stephanie Clark said. Clark is particularly motivated to speak for women's rights and health care; she cited civil rights for others including LGBT communities.

"For many years, what was normal was bad for many people," rally and march speaker Brian Terrell said of the complacency of Americans before Trump toward polite discussions or ignorance of injustices. He said the Trump administration in many cases is only perpetuating from previous administrations including the Obama and President George W. Bush ones - a change that's a "matter of image more than substance," he spoke in particular of foreign policy.

Michela Skelton, a candidate for Missouri House of Representatives District 50, was scheduled to be the opening speaker at Saturday's march in Columbia.

Terrell, a co-coordinator of Voices for Creative Nonviolence, said the Trump administration has become a moment of reckoning and confrontation for many people. Even if progressive political candidates sweep offices soon, "we still need to be in the streets," he said, adding people need to "find a whole new way to live in the world."

"It's the only hope of our survival," he said.

Have a question about this article? Have something to add? Send an email to reporter Phillip Sitter at [email protected].