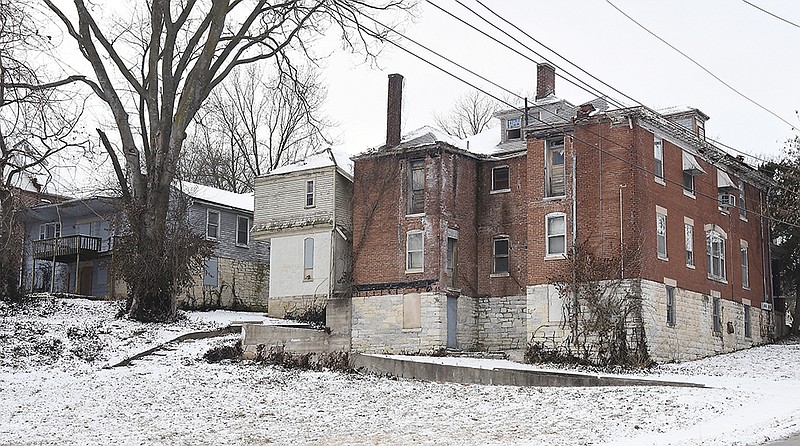 The three buildings at 101 through 105 Jackson St. are the subjects of a report by three commissioners assessing their fair market value, the results of which will be presented to the Jefferson City Housing Authority.

Since implementing a residential non-smoking policy earlier this month, the Jefferson City Housing Authority is educating residents and non-residents where they can and cannot smoke.

Housing Authority Executive Director Cynthia Quetsch said while it has been difficult implementing the policy, which started Jan. 1, they are slowly making progress on educating people about the smoking-designated area locations.

Smoking is not allowed inside units or buildings owned by the Housing Authority. This includes cigarettes, cigars, pipes, water pipes, e-cigarettes and vape pens.

The Housing Authority had non-residents smoking in the wrong areas outside the buildings this month, Quetsch said, and officials were working to install signs informing  which buildings on the properties are smoke-free. She added January is a "month of learning" and hopes to solve any confusion regarding the policy this month.

The U.S. Department of Housing and Urban Development announced in December 2016 it would implement smoke-free policies for all housing authorities by July 30.

Quetsch said last month the Housing Authority received mixed responses from residents - non-smokers were excited, while smokers thought it was a form of discrimination. HUD states smoke-free policies are legal, and smokers are not a protected class.

All properties except for neighborhoods and Capital City Apartments will have designated outside smoking shelters residents can use. Dulle and Hamilton Towers, Hyder and LaSalette Apartments do not have shelters currently but will in the coming months.

Neighborhoods and Capital City Apartments do not have smoking shelters as there was not a centralized location, but residents who live in those properties can smoke if they are 25 feet a from the buildings. Along with shelters, there are also multiple designated areas.

Quetsch said when she has driven by the buildings, people have been using the smoking shelters, which she said was reassuring.

In April, the Housing Authority will hold public meetings for tenants to talk about the smoking shelters and smoking-designated areas.

"Obviously, non-smokers don't want the shelters close to them and smokers have some ideas," Quetsch said, describing how residents' comments at Herron Apartments influenced the location of that building's designated smoking area. "We changed it based on their input, and I'm more than willing to do that now. We probably won't move shelters now, but we'll hear suggestions about designated areas."

HUD and Quetsch said the smoke-free policies would eliminate secondhand smoke and save housing authorities money on maintenance and cleaning costs. The estimated annual savings for smoke-free public housing is approximately $154 million nationally, according to HUD.

In August, the Housing Authority filed a civil suit to condemn the three properties as part of the East Capitol Avenue urban renewal plan.

The Housing Authority wants to acquire the properties so they can be privately purchased and rehabilitated. It offered to purchase the properties, Quetsch said, but Buescher refused and the Brattens did not respond to the offer.