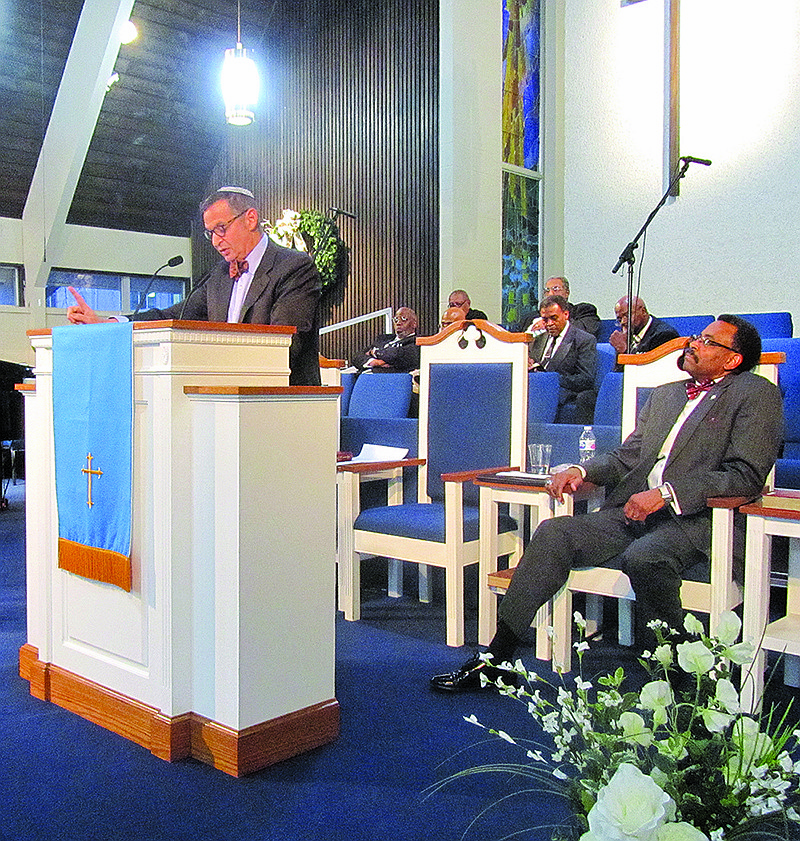 Rabbi Doug Alpert said the theme for this year's Martin Luther King Jr. remembrance, "It's Time," is not an invitation to look back, but to ask what God requires of us now in the fight for racial equality.

"For whatever progress we think we have made in the struggle, we have made woefully little progress," said Alpert, the featured speaker Sunday at Second Baptist Church's annual MLK remembrance service.

He cited the "new Jim Crow of mass black incarcerations," deplorable access to quality housing, "insidious policies by white politicians to silence black voices through voter suppression." The fact that we need a Black Lives Matter movement, he said, shows the importance of the "It's Time" theme chosen by the church.

"Whatever work I have done and continue to be honored to do in the black community, I'm still a white kid who grew up in a pretty white suburb with a life of white privilege," he said.

Alpert has been the featured speaker at many rallies for low-wage workers, and has been arrested along with other clergy and fast food workers fighting for workers to receive higher wages. He has also led a protest at the Capitol for Medicaid expansion.

Alpert spoke passionately about issues facing the black community, and, at times, blended humor into his speech: "The only thing two Jews can agree on is how much the third Jew should be giving to the synagogue," he said to laughter at one point.

God, he said, is the ultimate judge, but that we, too, should judge ourselves. He quoted parts of Psalm 82, which says to defend the poor and orphans and to do justice to the afflicted and needy.

Moses, he said, left his own people to find strength and to fight power.

"He later on marries a Cushite woman widely considered by commentators to be Ethiopian. So I guess Moses didn't think Africa was such a " he said, pausing, as laughter erupted in the congregation. Alpert was referencing President Trump's recent derogatory comment about Africa and several other countries.

Alpert said God wants us to free our "captive communities of color." Communities, he said, that are "imprisoned" through substandard education, limited access to transportation, decent housing, few grocery stores and targets of drug prosecutions.

"Doing nothing is doing harm," he said. "It is upon us, it is upon me, to free the captives."

"It's not just time, it's past time," he said. "This country was built on racism. From 1619 in Jamestown, don't you think four centuries is enough?"

He told the congregation they are obligated to show up on the streets, or anywhere fights for racial justice is taking place. He said it's past the time to feel uncomfortable when fighting for justice.

"But we do so with respect," he said, adding they are "foot soldiers" in the fight, not there to run the Army.

"It's time to value black lives, to fight to stop racial profiling of the unjustified, ignorant and bigoted fear that leads to the immoral loss of black lives, especially our black kids," he said.

He asked that it be God's will for King's dream to soon become reality.

Also during the service, Pastor Cornell Sudduth presented the annual Drum Major Award for Justice to Charles Pannell, who volunteers at the Samaritan Center, has responded to natural disasters and has marched during the Ferguson protests in the wake of the fatal shooting of Michael Brown, a black man, by a white police officer.