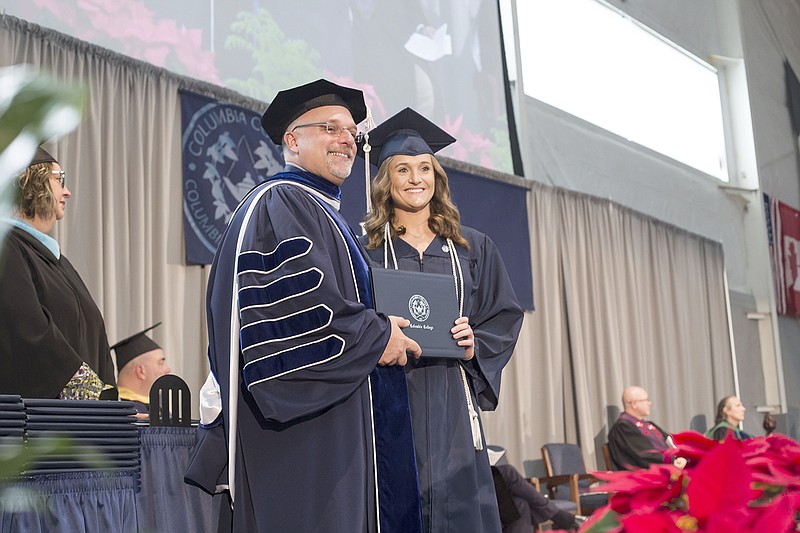 Of all the enviable qualities attributed to Columbia College Presidential Award winner Jordan Poire, from her intelligence to her athleticism, Poire really values the one quality that makes everything else possible: dedication.

The 4.0 student, 2017 NAIA third-team All American soccer player and recent Columbia College finance graduate said the sense of commitment to soccer she gained growing up in Jefferson City carried into the rest of her life.

College parties took a backseat to soccer practices. She relentlessly ran the right flank with the urge to score and the will to defend her goal, surrounded by teammates in which she found best friends. All the while, she earned straight A's after occasional bus ride study sessions.

"I've been playing soccer since I was about 4 years old," she said. "It's been a big part of my life, and it was sad when it all ended. I've always played, and I've always loved the game. I almost feel like sports keep you grounded in school and with your life. You have that commitment to your sport, and you have to make sure you stick with it."

For all of those reasons and more, Poire was bestowed the Presidential Award, Columbia College's highest academic honor.

"I definitely did not see it coming at all," she said of the award. "When he started speaking about it, I wasn't paying full attention, and then I started hearing things like soccer and my degree and that I'd already started on my master's, and I was like, 'Oh, that's me.'"

Poire gives back as much praise as she has been given. She said her family, teachers, teammates and coaches were instrumental in her success on the field and in the classroom.

She said her parents, Shelly and Dave Poire, were her biggest fans.

"They might have been more dedicated to the team than I was. They didn't miss a game, no matter how far it was, and they were such an amazing support system."

Poire wasn't even planning to play competitive college soccer until her Helias High School teammate Tiffany Weaver convinced her to try out after they enrolled in Columbia College. Poire ended up starting 19 games as a freshman midfielder and joined the first-team all-American Midwest Conference her first season. By 2016, Poire's coaches moved her to right defender, where she became one of the best in the league and a Daktronics-NAIA Scholar-Athlete.

"We had such a great relationship with our coaches, and I wish them all the best in the years to come," she said. "I know the team is just going to get better and better and go further and further, and hopefully one year get that national championship. And the teachers at Columbia College are just so supportive. Your class size is small and they really help athletes stay caught up and have everything you need."

Now, Poire has to leave competitive soccer behind and begin again in her professional life. She has started an online master's program through Columbia College and is applying for jobs with the intention of becoming a financial analyst. However, as always, she is willing to put in the work it takes to get to the goal.

"I really like numbers, so I'm hoping to find something in (the financial analysis) area," she said. "But there's so many analysts positions that can help you get towards a financial analyst position, so I'm kind of looking for entry level stuff. Most college kids don't have that experience, so you have to start out with something and build up those years."