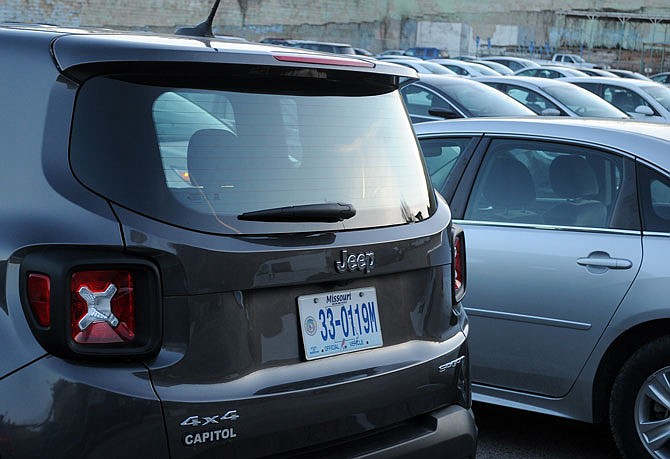 A state owned fleet of cars is at a lot near the Missouri State Penitentiary. Gov. Eric Greitens announced 30 cars in the state's pool will be sold.

Missouri's fleet of cars used for state employees' travel is getting smaller, thanks to the work of the governor's Task Force on Fleet Management.

Gov. Eric Greitens announced during Wednesday's State of the State address: "We found 30 cars the government didn't need, and we're getting rid of them. That's going to save Missourians over $500,000."

But those anticipated savings, Office of Administration General Services Director Cindy Dixon told the News Tribune, come from "specifically what we estimate it would have cost us to replace those vehicles in the future."

Dixon said the 30 vehicles being sold come from a group of 170 Jefferson City-based vehicles that are "part of the consolidated motor pool that OA runs, that all state agencies are able to utilize for business travel."

The average age of the 30 vehicles is four years, with the oldest six being 2012 models and the youngest four being 2015 models.

A spot-check of Kelly Blue Book's website indicates the vehicles could have a trade-in value ranging from $2,500-$6,000.

The Fleet Management task force issued its final report Wednesday - the same day as Greitens' half-hour State of the State address to a joint legislative session.

The report notes the state spends "approximately $98 million each year to transport state employees for official business," and Erdmann asked the task force "to seek out opportunities to streamline fleet practices and lower the overall costs of transportation utilizing industry best practices."

The state has five major independent fleet programs and systems:

Office of Administration, with 3,651 total vehicles.

As the task force was looking at fleet operations, Dixon said, "we decided to look at the data a little bit differently and looked at how many vehicles were used on any given day - that was data that we didn't have readily available."

So OA staff manually sifted through the agency's records.

"As a result of that analysis, we were able to determine that we could get rid of 30 vehicles without sacrificing service to the state employees who use this pool for official travel," Dixon said.

"There's always going to be peak times, and there's seasonality in travel, as well," she explained. "A good business model would be not to have enough vehicles to handle every single request - but we have other options, (including) a contract with Enterprise Rent-A-Car."

OA spokeswoman Ryan Burns said that contract is a statewide, flat-rate arrangement for daily, weekly or monthly use, with rates varying by vehicle class - the smaller the vehicle, the lower the rate.

Cutting the state's fleet by 30 vehicles shouldn't cause a noticeable change in the use of that Enterprise contract, Dixon said.

The more than $520,000 in potential savings anticipated from not replacing the 30 vehicles doesn't include any money the state might receive from their sale, she said.

"Three have been sold already," she said. "We're required to go through Surplus Property to dispose of state assets, so they will go through our normal channels for disposal. They are posted to an online auction site, or they also could be sold to other governmental entities that are eligible to purchase state property."

Dixon said the task force's report provides the starting point for more work - and it's too soon to determine what other benefits the state might experience.

Dixon said officials will continue "to be looking at a host of different things (and) coordinating with other state agencies that have large fleet operations.

"We're going to be looking at everything."

Last week, the four-campus University of Missouri System - which participated in the task force's work - announced it will make some changes Feb. 1 that "could generate immediate recurring annual savings of $1.5 2 million for the UM System."

Have a question about this article? Did we miss something? Send an email to reporter Bob Watson at [email protected]